In October 1990, the first LGBTQ+ Pride was celebrated on the African continent. The event was held in Johannesburg, South Africa. This historical moment continues to inspire and motivate ongoing engagements to protect the rights of people with sexual orientation and/or gender identity (SOGI). Celebrating October as LGBTQ+ Pride month, this Vignette uses the latest data from the International Lesbian, Gay, Bisexual, Trans and Intersex Association (ILGA World), and three iterations of GCRO’s Quality of Life (QoL) survey, to map protections for LGBTQ+ rights across Africa, and consider how attitudes towards LGBTQ+ individuals and their activities are shifting in the Gauteng City-Region (GCR), South Africa.

While Africa remains the most queerphobic and transphobic continent worldwide, the landscape of rights for LGBTQ+ individuals is gradually changing. Before 1990, 12 countries had never criminalised LGBTQ+ identities, and this number has remained the same to this day. Although 42 countries had criminalised LGBTQ+ identities before 1990, data from ILGA World (2020) shows that since 1990, ten countries have changed laws to allow LGBTQ+ individuals to publicly express their sexualities and identities.

Over the last three decades, attitudes towards SOGI expression have gradually begun to change in many areas of social life in Africa. Changes include more representations of queer life in the media, the hosting of LGBTQ+ pride parades even in countries with no legal protections for same-sex and gender non-conforming individuals, the repeal of discriminatory legislation, and an extension of marriage and civil partnership to LGBTQ+ partners. Although this is a sign of hope and slow progress, incidences of hate speech, violence, and prejudice are still rife and remain a threat to the wellbeing of LGBTQ+ individuals across the continent. 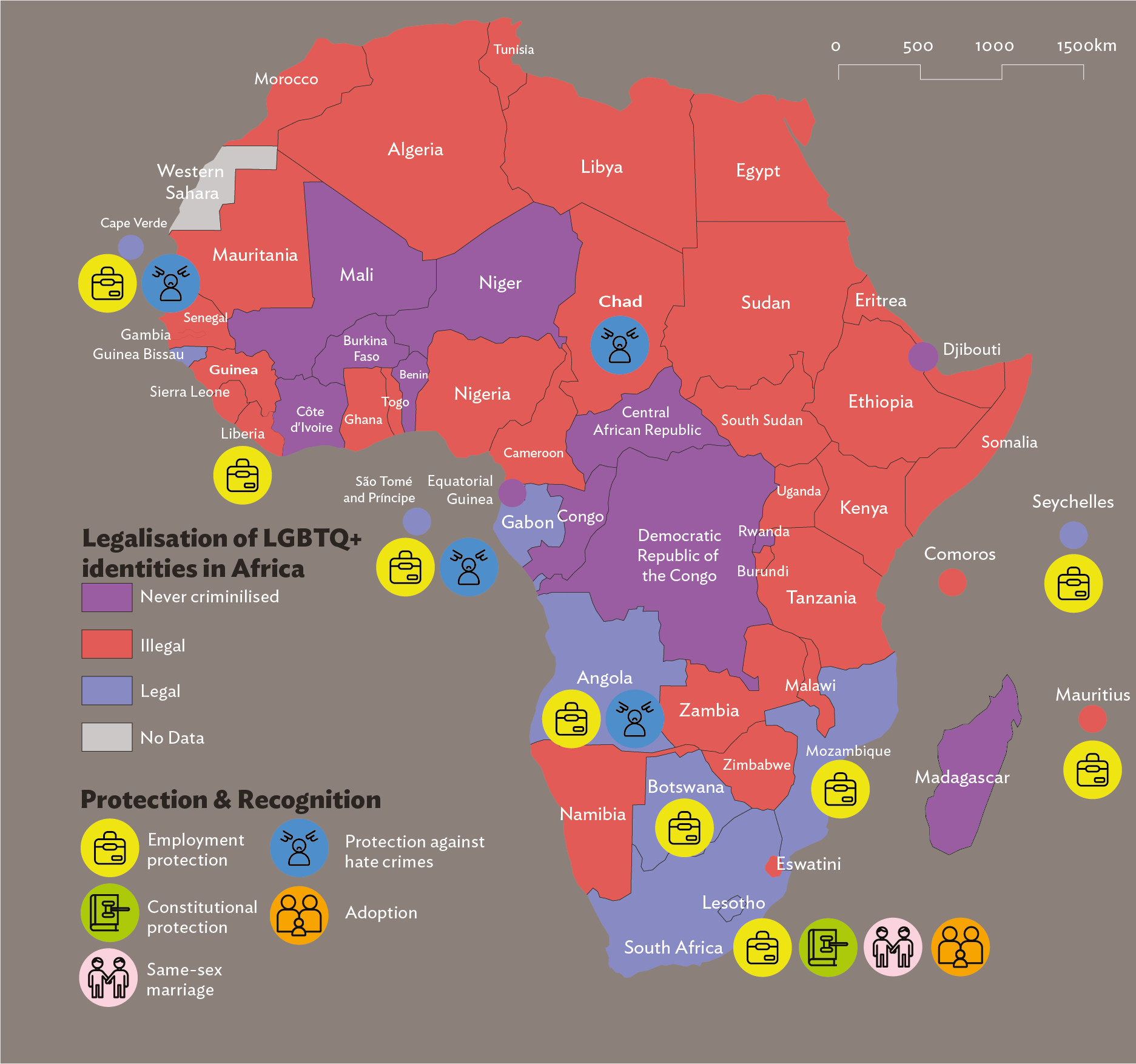 Data from ILGA World (2020) suggests that of all ten countries that legalised LGBTQ+ identities, only one, which is South Africa, has a constitutional protection that recognises same-sex marriage and adoption by LGBTQ+ partners. However, South Africa’s legislative commitments exist amidst a legacy of pervasively conservative societal attitudes. Day-to-day life of LGBTQ+ individuals remains challenging, especially because of socio-cultural prejudice towards norms deviating from heteronormativity. Adverse public attitudes, and in turn a lack of safe space for LGBTQ+ individuals, are often fuelled by condemnation from religious and political organisations and leaders. Preliminary evidence from the sixth iteration of GCRO’s Quality of Life (QoL) survey suggests that LGBTQ+ residents of Gauteng are more likely to be exposed to various forms of physical and sexual violence than non-LGBTQ+ residents.

Since 2015/16, the QoL survey has asked respondents whether they agree with the statement: "It is acceptable to be violent to ‘gays and lesbians’ ". The results have improved markedly since the 2015/16 iteration of the survey. In 2020/21, only 4% agree or strongly agree that it is acceptable to be violent towards LGBTQ+ people. This growing tolerance is encouraging, but according to ILGA World (2020) data, South Africa does not legally protect LGBTQ+ individuals against hate crime in the same way as other countries do, raising the question whether additional legislation is needed to further strengthen Section 9(3) of the Constitution.

With thanks for contributions of thoughts and edits from Yashena Naidoo, Julia de Kadt, Alexandra Parker and Graeme Gotz.