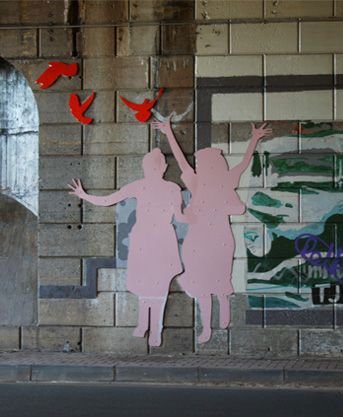 GCRO has initiated a ‘Visitors Series’ with the aim of securing the services of visiting researchers, or practitioners to reflect on and write up their work experiences and work with the GCRO for a defined period.

In January 2019, Sandiswa Sondzaba joined the GCRO as a research intern. She recently obtained an MSc in Human Geography which focused on how technocrats’ perceptions of Alexandra Township influenced their attempts at implementing the Alexandra Renewal Project’s aims and objectives.

Dr Carla Washbourne from STEaPP (UCL)joined GCRO for a third visit in May 2019, deepening her research on the GCRO and its impact.

In late 2018, the GCRO was joined by two GIS interns, Yashena Naidoo and Bonolo Mohulatsi. Yashena is currently working towards her Masters in Geoinformatics with a project related to evaluating novel street-addressing approaches in South African settlements. Bonolo is currently pursuing her MSc in GIS and Remote Sensing with a project focusing on private affordable housing and the implications that such developments have on surrounding communities.

From 20-24 March, GCRO hosted Stephen Graham on the Johannesburg leg of his NRF-funded visit to South Africa. Stephen Graham is Professor of Cities and Society at the Global Urban Research Unit at Newcastle University's School of Architecture, Planning and Landscape. His work on Splintering Urbanism (2001) is widely known and used in South Africa. During his visit, he presented a seminar in the Faces of the City Seminar series at the University of the Witwatersrand. The seminar was based on a section of his new book, and this paper available here: http://rsa.tandfonline.com/doi/abs/10.1080/136048.

In May 2017 Dr Carla Washbourne continued previous research on GCRO and was joined by Joanna Sawkins, an intern at STEaPP, who worked on a project to compare and contrast the working practices of different urban observatories globally.

In early 2016, GCRO employed three new GIS interns, Samkelisiwe Khanyile, Christian Hamann, and Mncedisi (MC) Siteleki. Samkelisiwe has a research interest in mining, Christian is interested in socio-spatial change and Mncedisi has a background in archaeology. In 2017, all three interns were employed full-time as junior researchers.

Over the course of April and early May 2016, GCRO hosted Dr Carla Washbourne, a visiting researcher from STEaPP (UCL). Dr Washboune examined GCRO’s work on green infrastructure and its take-up in provincial and local government.

For the first time, the GCRO hosted two post-doctoral fellows, Dr Aidan Mosselson and Dr Sian Butcher, both funded by the University of Johannesburg from 2016 to 2017.

LaDawn Haglund, Associate Professor in the Global Institute of Sustainability at Arizona State University at Arizona State University, accompanied by her PhD student Julie Gwiszcz, were hosted by GCRO between January and March 2014. They undertook research for a comparative study across Johannesburg, Delhi and Sao Paolo into the legal, institutional, and political mechanisms by which social rights – specifically, the human right to water and the right to a healthy environment – are being claimed and realised in practice.

GCRO hosted Prof Jenny Robinson from UCL and Prof Martin Murray from the University of Michigan for a series of discussions in June and July 2014.

In October 2014 the GCRO hosted Professor Maria Paula Meneses from Coimbra University, Portugal and the University of Eduardo Mondlane, Maputo and Dr Mpho Matsipa from Wits School of Architecture and Planning. The wide ranging discussion encompassed transformation in post-colonial cities, urban organisation and form, and trade.

Jennifer Williams, a Doctoral Student in urban planning at the Taubman College of Architecture and Urban Planning, University of Michigan, joined the GCRO in June 2013 for 6 weeks as a visiting PhD student. During this period she worked on her PhD research investigating mixed income housing in Johannesburg.

In July 2013, Daniel Kibirge was appointed as a GIS intern, assisting with GIS projects/mapping and an update of the GIS website, under the supervision of Chris Wray. The 2013/2014 GIS internship was sponsored by Esri South Africa.

In 2012, GCRO initiated an internship programme. In May, following a very competitive process, GCRO awarded internships to three exceptional candidates. Kavesha Damon worked principally on GIS projects and mapping support. Potsiso Phasha worked across a range of areas, but principally on the Visualising the GCR and with Sally Peberdy on her trade and peripheries projects. Kerry Bobbins has expertise in both GIS and environmental management, and worked mainly in support of GCRO’s sustainability projects. Kerry joined the GCRO as full-time staff following her internship.[AM1]

The Visitors Series kicked off in 2010 with NRF Chair in Urban Planning and Modelling, Phil Harrison, taking up space in GCRO offices on 1 April 2010. The visit came to end with GCRO’s move into temporary office space at the end of August 2010, and with Prof Harrison finding alternative space in the School of Architecture and Planning. The visit laid a foundation for ongoing co-operation with Prof Harrison, as a member of the RAC, through the launching of a joint seminar series, and through the design of a collaborative book series project on spatial change in Gauteng.