2016 was a year of dramatic election results globally. For example the Brexit vote in the United Kingdom and the American presidential elections both delivered somewhat unexpected outcomes heralding tectonic shifts in the political landscape. In both cases there are interesting spatial stories behind the results; see here and here. South Africa’s August 2016 local government elections also saw some unanticipated and rather momentous results.

In 2014, after the national and provincial elections, GCRO presented a unique set of dot density maps showing the distribution of votes for key political parties in Gauteng. See here. In this Map of the Month we repeat and extend this spatial analysis looking at voting patterns in the 2016 municipal elections.

The results of the August 2016 local government polls are of course now well known. The headline story has been that electoral support for the African National Congress (ANC) declined significantly. Even more dramatically the combined ‘opposition’ vote for the Democratic Alliance (DA) and Economic Freedom Fighters (EFF) has seen control of three major Gauteng municipalities – Johannesburg, Tshwane and Mogale City – wrested from the ruling party. But what are the details and, perhaps more importantly, the spatial patterns behind these top level Gauteng results?

These results must be seen in the context of the actual numbers of votes for each party, and the turnout – the percentage of registered voters who actually went and cast their vote – in each election. The turnout for South Africa’s municipal elections tends to be much lower than for the national and provincial elections, as shown in Table 1.

In all, 830 716 fewer valid votes were cast in the 2016 local elections than in the 2014 national and provincial polls, and voter turnout fell from 73% to 58%. Of this reduction the greatest actual and proportional loss was seen by the ANC, with 710 979 fewer votes. The DA and EFF also saw fewer votes than in 2014, but their reductions were much lower, and they both gained in proportional terms.

There is an interesting spatial perspective beneath these numbers. Map 1, GCRO's December Map of the Month, shows a blended picture of the percentage of votes to each of the three main political parties – the ANC, DA and EFF – in each voting district, the lowest level of the election geography. It needs to be noted that other political parties also contested the election, but only the ANC, DA and EFF results are presented. Only the proportional representation (PR) voting results are mapped, not the ward councillor component of the election. 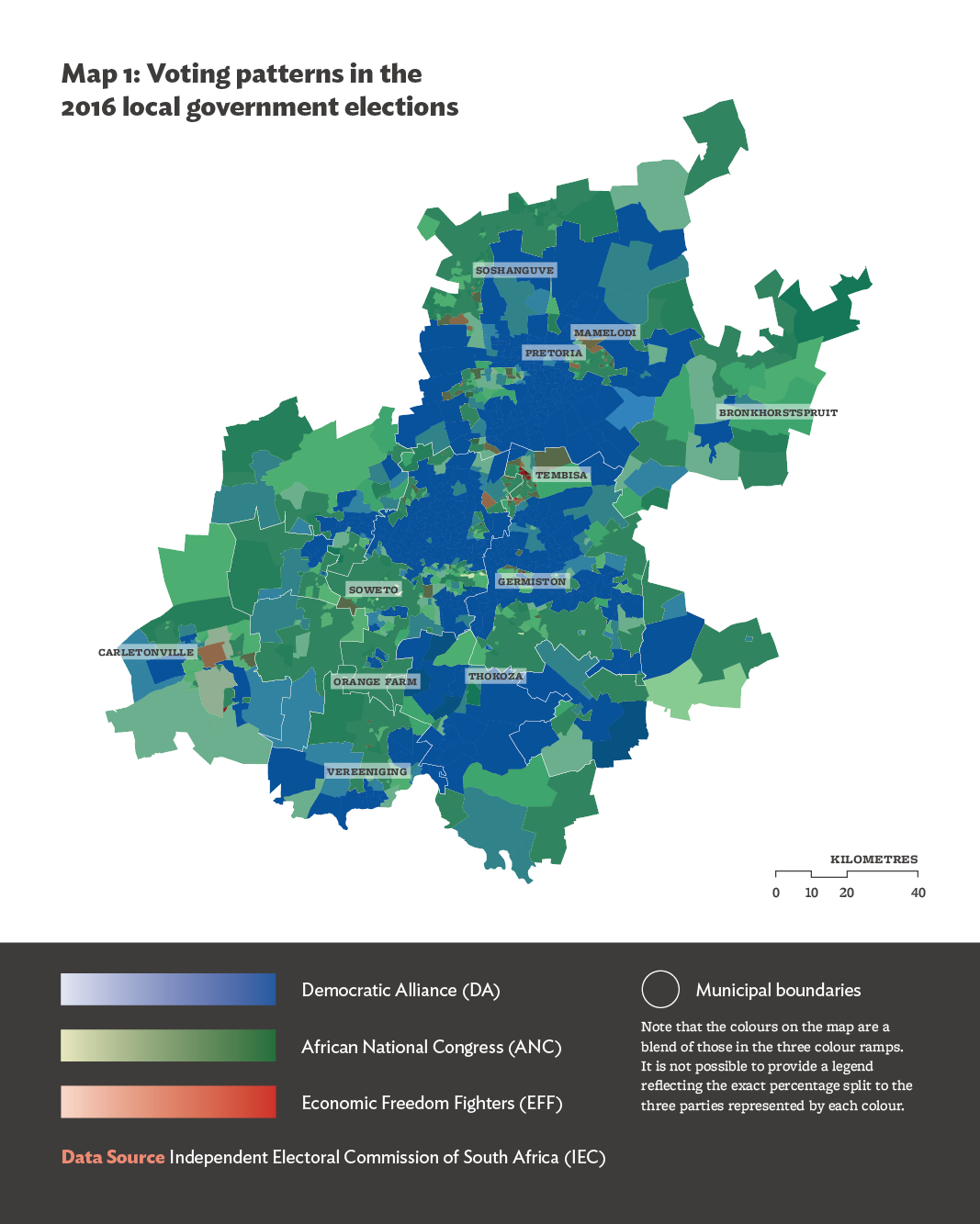 It should be said that maps showing which party won which municipality, ward and voting district are already widely available. See here for an excellent example. Our map does show which party dominated in each part of the province, but in a way that reveals that the world is more nuanced and complex than the question of which party won where. The map is a combination of Maps 2b, 3b and 4b below, layered together in Photoshop. Map 2b shows the percentage of votes to the ANC in each voting district, using a colour ramp from yellow to green. The higher the percentage of votes to the ANC, the darker the shade of green. Similarly Map 3b presents the percentage to the DA using a blue colour ramp, and Map 4b the percentage to the EFF using a red colour ramp. As the maps illustrate there are parts of the province which almost exclusively supported one political party. But in many parts voting districts were split, with more equal percentages of votes to either the ANC, DA or EFF. This is most clearly visible in the blended map, where colours in the range between blue, green and red highlight what – following the language of the US elections – might be called ‘battleground’ or ‘swing’ districts where no one party is dominant. By way of one example, a voting district in Mamelodi (Tshwane) saw a near even split in votes with 38% to the ANC, 34% to the DA, and 26% to the EFF.

How did voting for each political party shift since the last elections? Maps 2a and 2b compare the percentage of votes to the ANC in each voting district between the provincial and national elections in 2014, and the local elections in 2016. The picture might be distorted a little because of some changes in voting district boundaries between 2014 and 2016, but the effect will be minimal. Similarly Maps 3a and 3b compare the results for the DA, and 4a and 4b for the EFF.

Across Maps 2a and 2b we see how many areas that were dark green in 2014 became more yellow in 2016, reflecting the 710 979 drop in votes to the ANC between the two elections. However there are a few areas that stayed strongly green or became even greener. Nine voting districts had more than 90% support for the ANC in 2014, and support peaked in one district at 93%; in 2016 only five voting districts had over 90% but support peaked in one district at 97%. 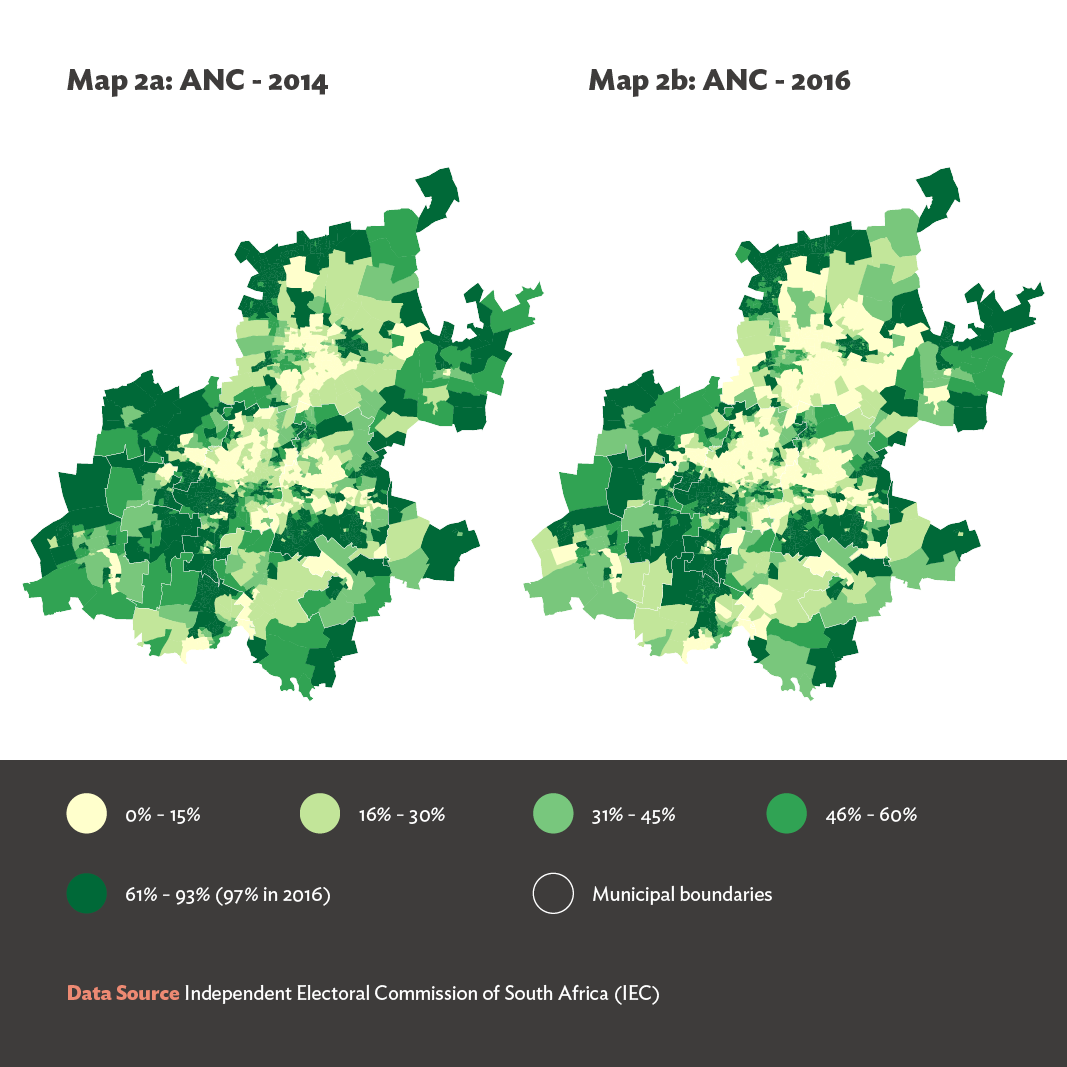 Maps 4a and 4b illustrates the growing support for the EFF. There is a lot more red in the map in 2016 compared to 2014, although the proportional gains for the EFF were in specific pockets. In 2014, support for the EFF peaked in one district at 74%, with the next highest being 48%. In 2016, support peaked at 53%, with another three voting districts above 50%. 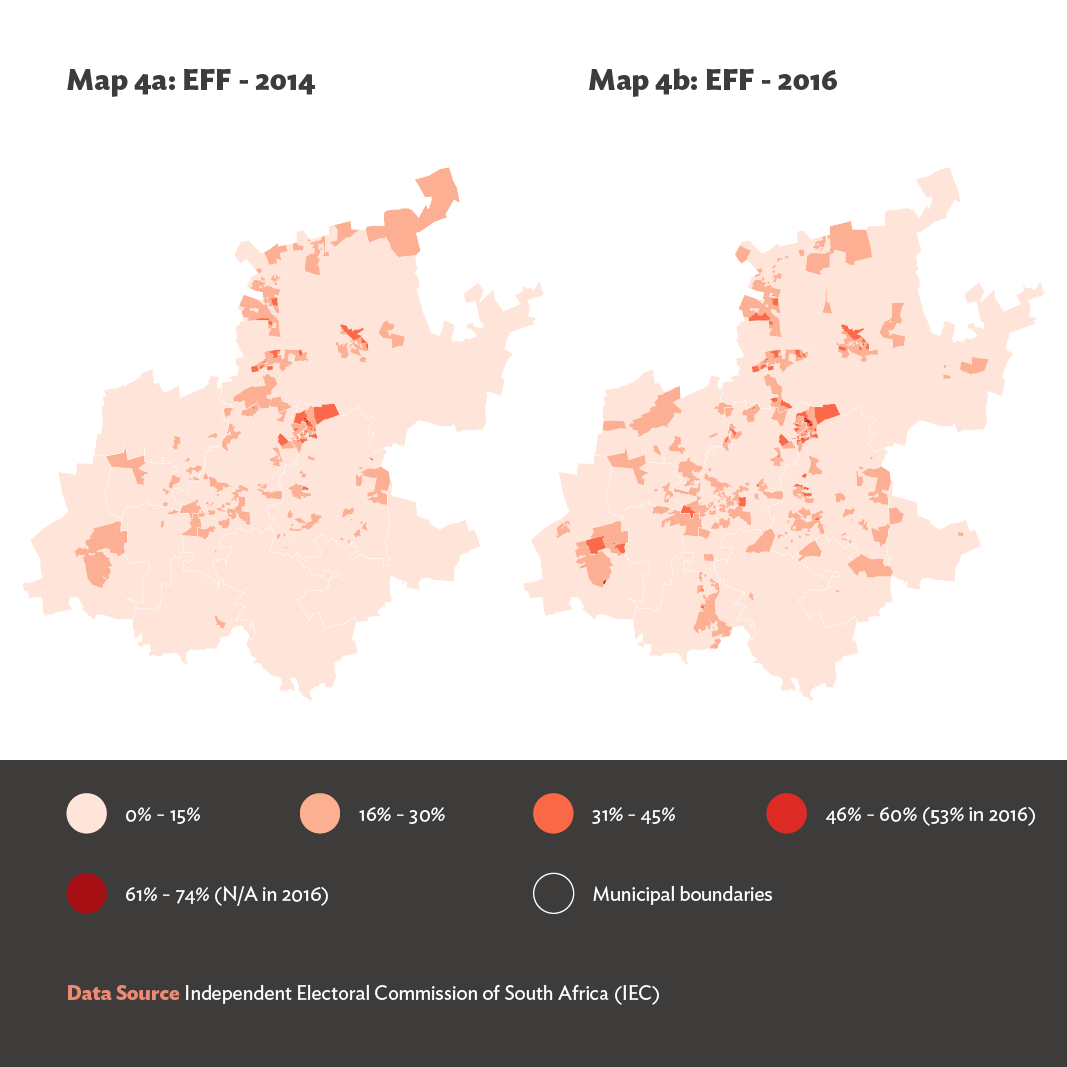 The map series below shows versions of our blended colour Map of the Month to illustrate how proportional support for the ANC and DA changed between 2014 and 2016 (Maps 5a and 5b), and similarly how support for the ANC and EFF shifted relationally (Maps 6a and 6b). These maps make clearer the strengthening of the DA and EFF in relation to the ANC. However the maps also illustrate that there remain many areas of heartland ANC support, notably the large ‘township areas’ of Soweto, Soshanguve, Kathlehong-Thokoza-Vosloorus and Orange Farm. While they have certainly made some inroads into these areas, the gains by the DA and EFF in heartland ANC support areas have not been as significant as one might think. By way of example, Jabavu in central Soweto saw averages across its voting districts of 81% ANC, 6% DA and 10% EFF in 2014. In 2016 this had shifted to 76% ANC, 7% DA and 13% EFF. 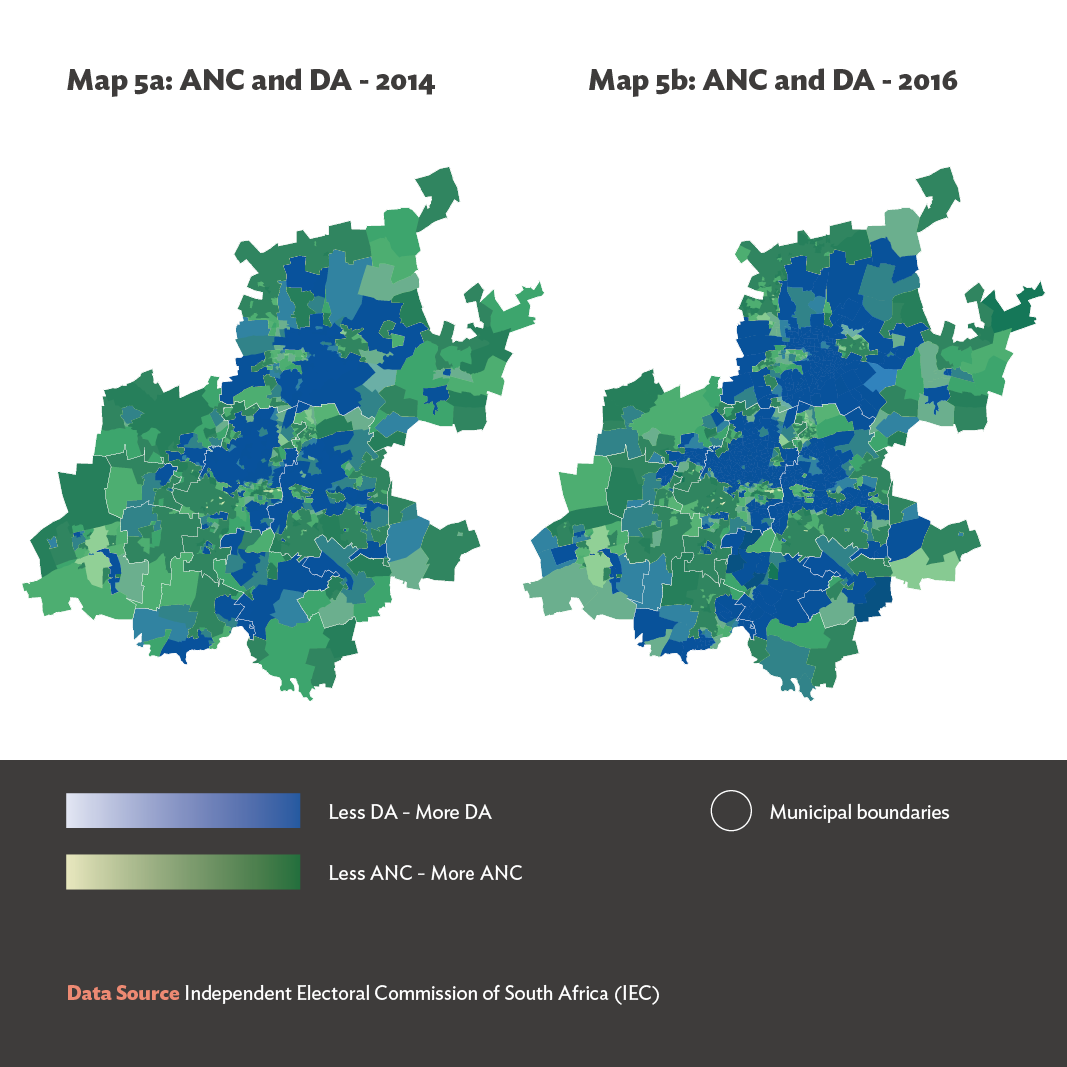 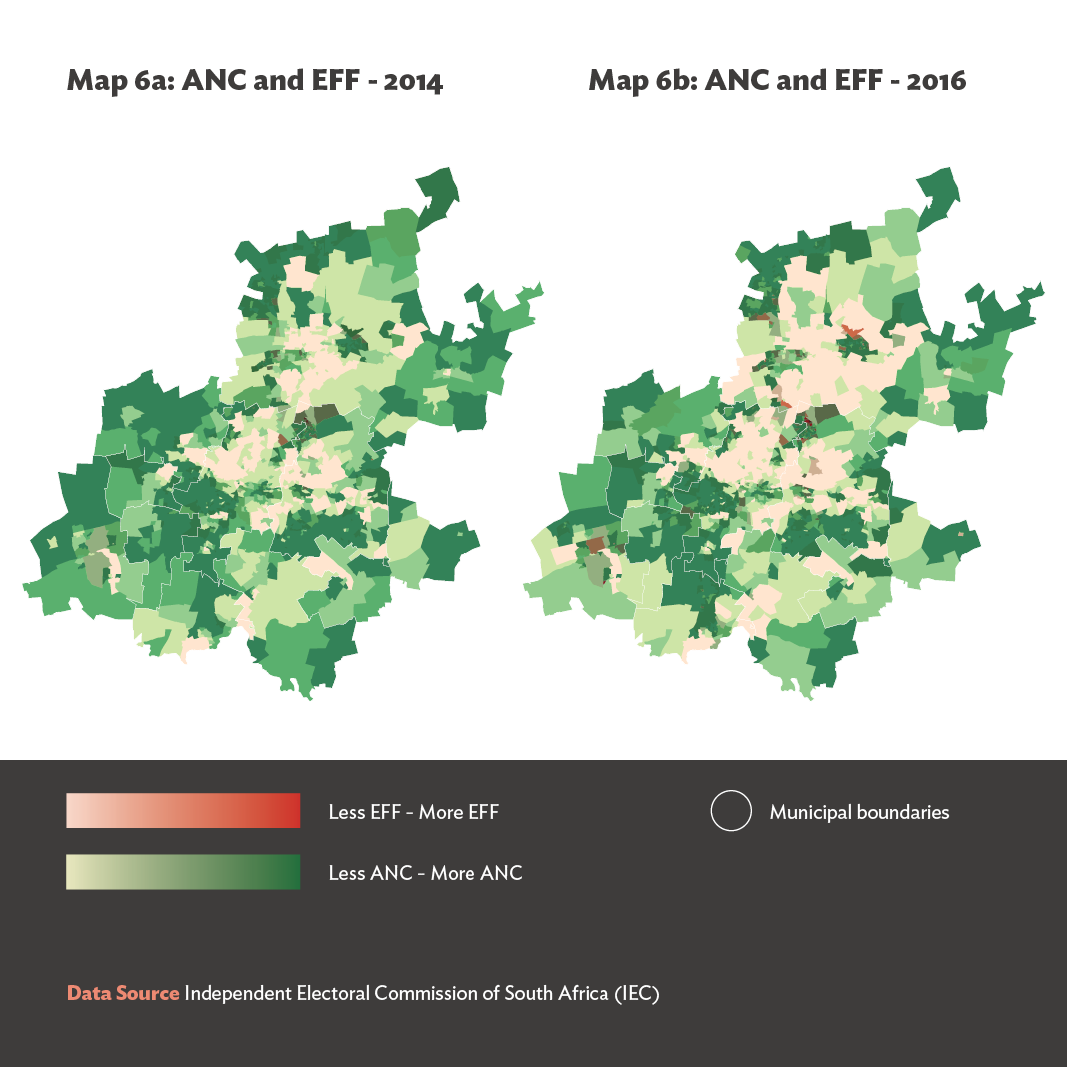 A far more significant part of the story of declining ANC support is shown in map 7. This plots the voter turnout across Gauteng. When read together with the other maps in this series it shows vividly how areas that largely voted ANC had dramatically lower turnout rates than areas that tended to vote DA. Compare, for example, Soweto and the 'northern suburbs' of Johannesburg. Of the 119 voting districts where the turnout was less than 40%, the ANC got on average 57% of the vote and the DA 15%. By contrast, of the 401 voting districts where the turnout was over 70%, the DA got on average of 69% of the vote and the ANC just 20%. As map 7 illustrates, the ANC’s inability to get its core voter base out to the polls in its historical areas of strength was a more substantial reason for its losses than a large shift of support amongst its traditional voters to the DA or EFF. 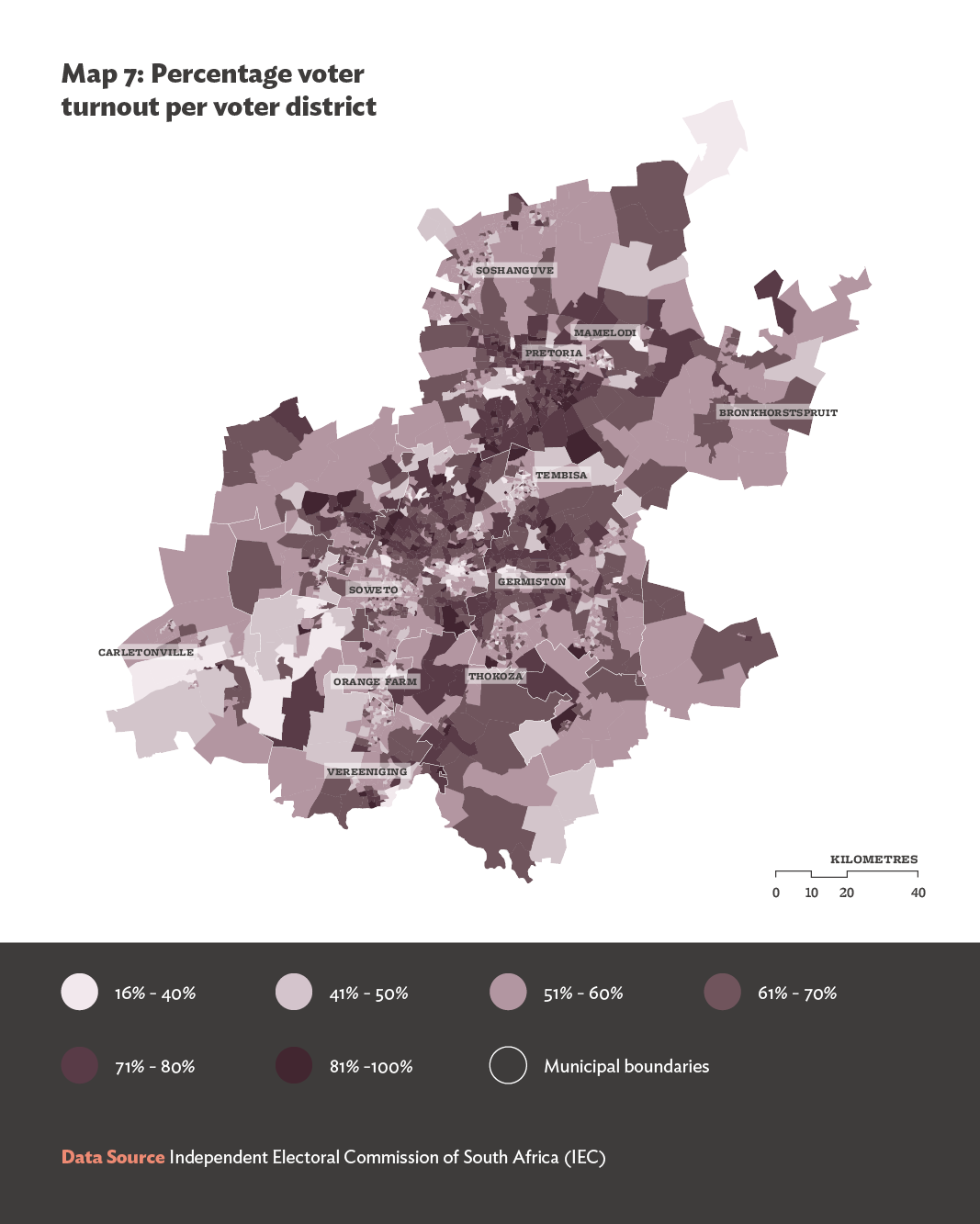