This special map-of-the-month map series shows the spatial distribution of votes for the 2014 provincial election in Gauteng. The votes for four of the main parties — the ANC (in green), DA (blue), EFF (red) and IFP (orange) — are shown using a dot density mapping technique and Independent Electoral Commission (IEC) voting districts as the basis for organising the data.The first map (on the left) shows the distribution of votes across the whole province in the just completed provincial election. Blue, for the DA, dominates the centre of Gauteng in areas historically demarcated under apartheid as white suburbs, as well as in historical Indian and coloured neighbourhoods. Green, for the ANC, dominates areas defined by apartheid as African townships and more recently established informal settlements. This broad pattern is to be expected. However, even at this scale it is possible to see three noteworthy trends: the presence of ANC voters in traditionally whites-only areas such as the northern suburbs of Johannesburg; the penetration of the DA into traditional 'ANC areas'; and the significant entry of the EFF into township areas and informal settlements. These trends are dramatically more visible in a series of zoomed in maps from different parts of the region: Tshwane, Sandton/Alexandra/Tembisa, Sebokeng/Midrand, Germiston, Johannesburg's northern suburbs, and Soweto (click on the thumbnails below to see each map). It is important to note that this mapping technique cannot account for the spatial density of voters. It might look, at first glance, as if the DA won Gauteng, but this is a distortion resulting from the fact that the larger numbers of ANC voters are overwhelmingly concentrated in the geographically smaller and much denser township areas, whereas DA votes are spread out across the region’s sprawling suburbs. GCRO will be doing a number of other election maps over the next month which will present the results in other ways. Watch this space.

Note: the dot density cartographic tool randomly assigns the dots within each voting district polygon, so some false clustering may occur. 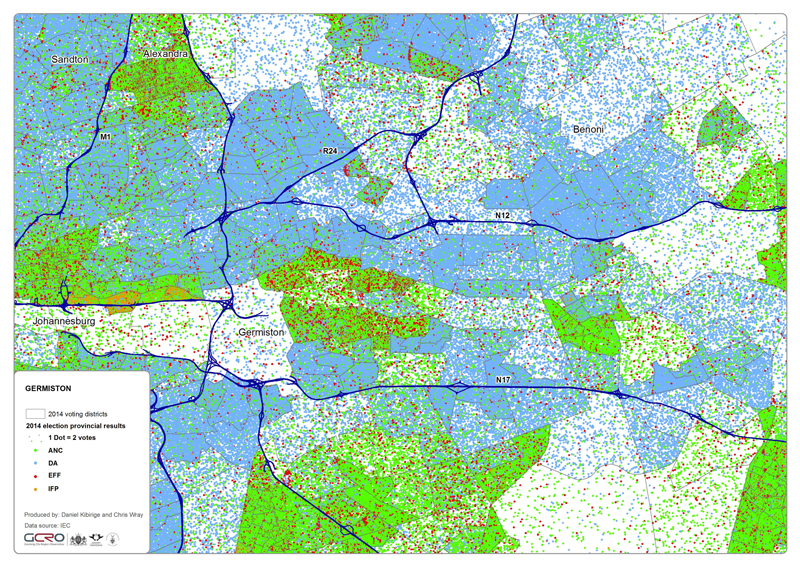 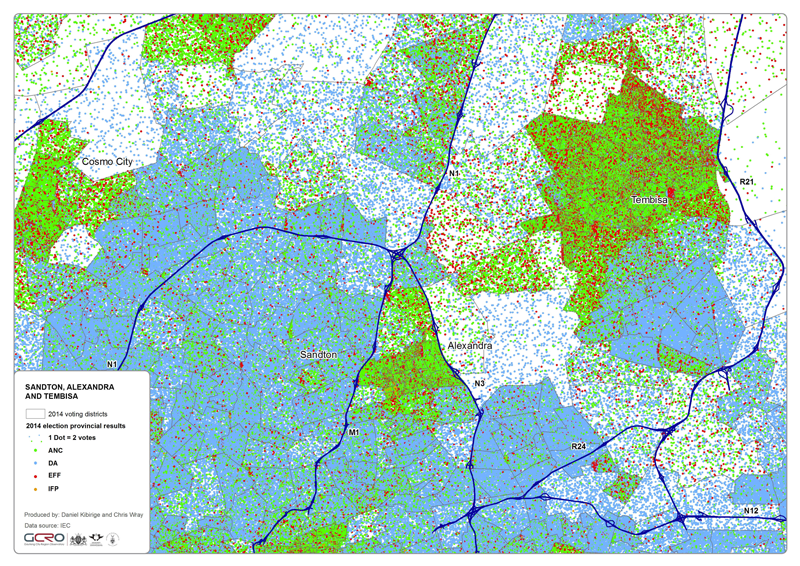 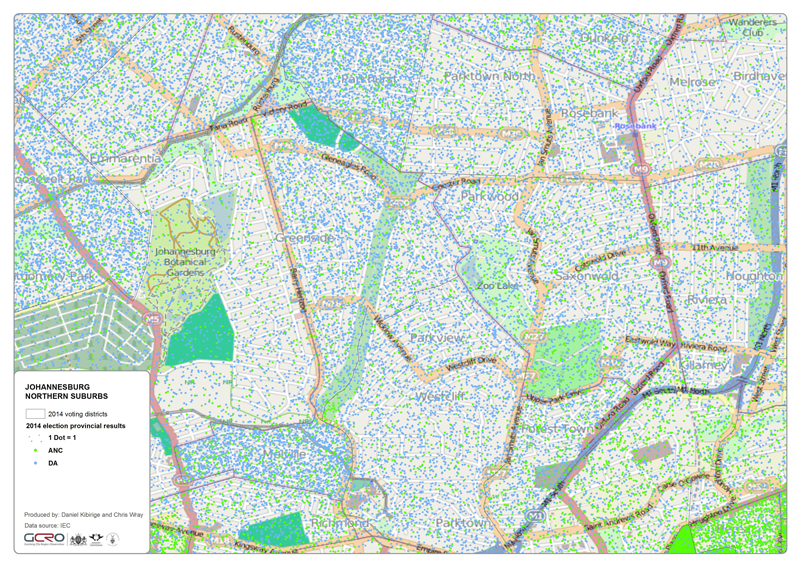 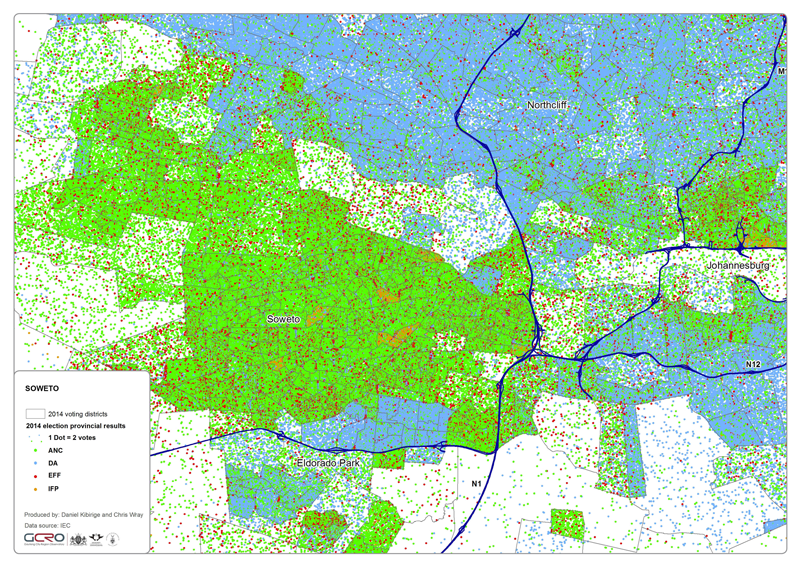 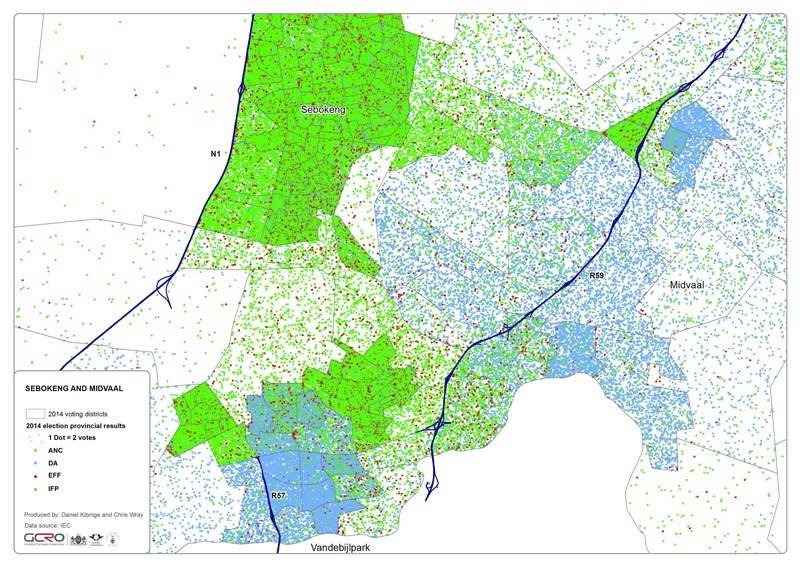 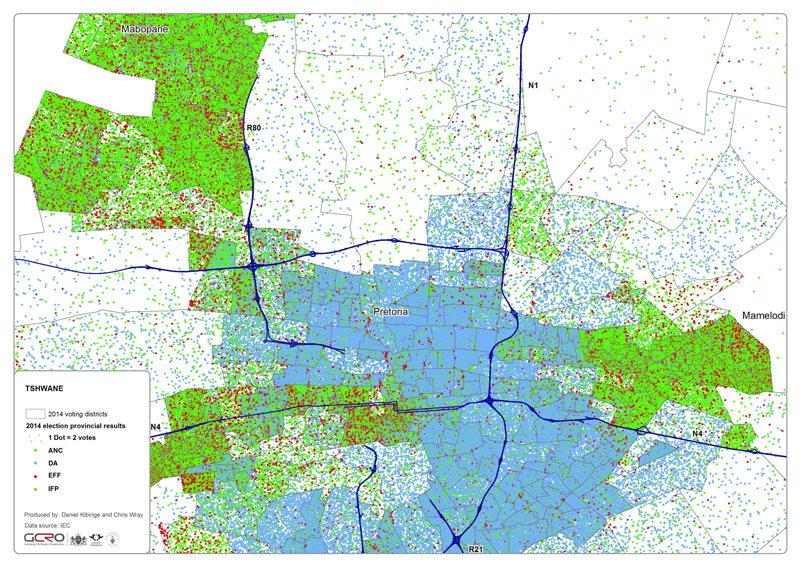