In our October 2018 Map of the Month, we showed how the number of residential buildings in Gauteng grew by 60% in 15 years: from about 2 million buildings in 2001 to about 3.5 million in 2016 (Hamann 2018). The analysis showed that the two fastest growing categories of housing, gated estate housing and informal dwellings, were servicing quite different segments of the housing market (Hamann 2018). In the February 2020 Map of the Month we take a closer look at the spatial distribution of these two fast growing privately built residential categories and we contrast them with government housing programmes. The analysis shows that in order to understand contemporary urban segregation and inequality we should not only consider the built environment that was inherited from apartheid, but also the ongoing production of housing for different markets in different locations in the three decades since the political transition started. 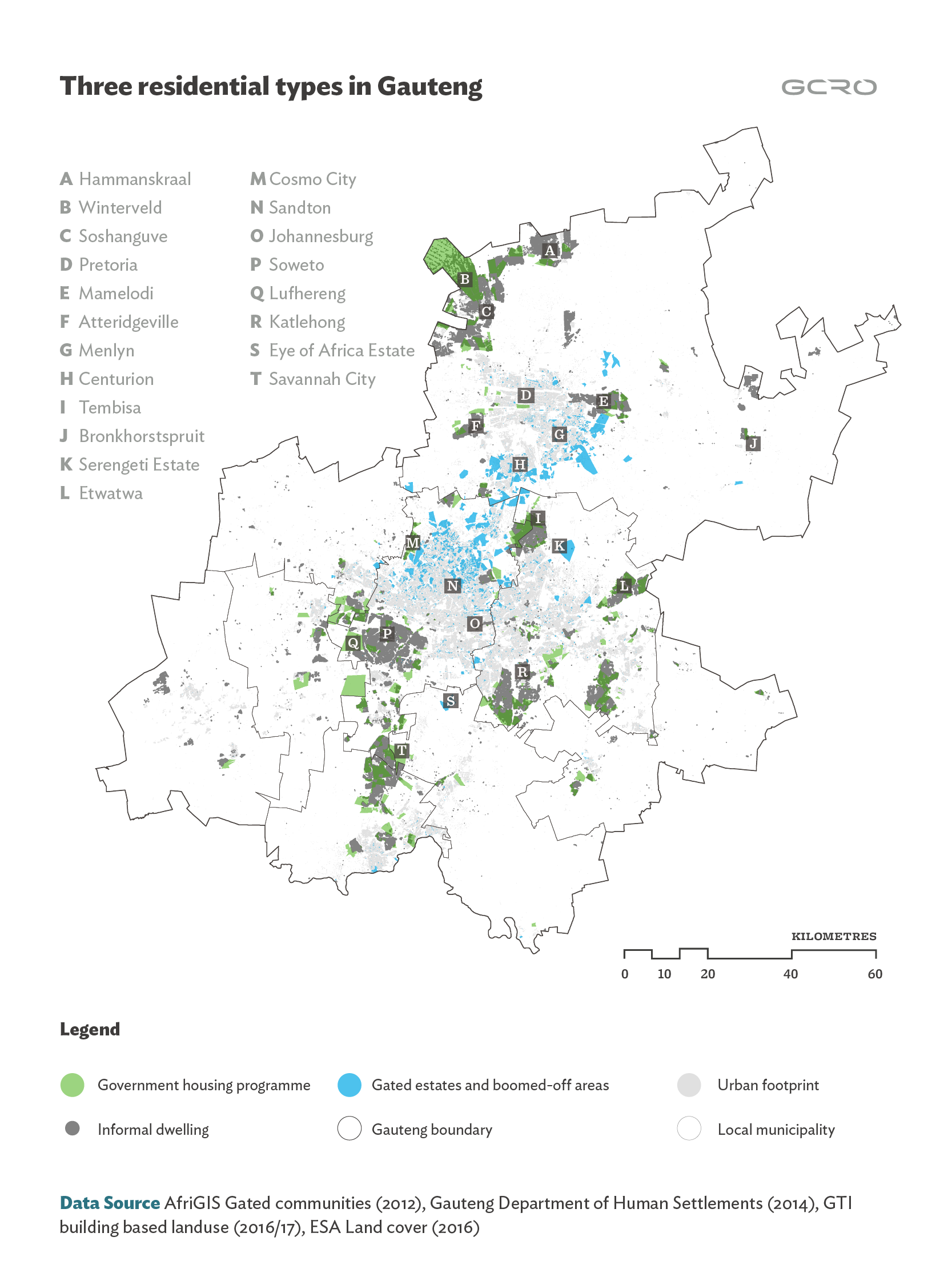 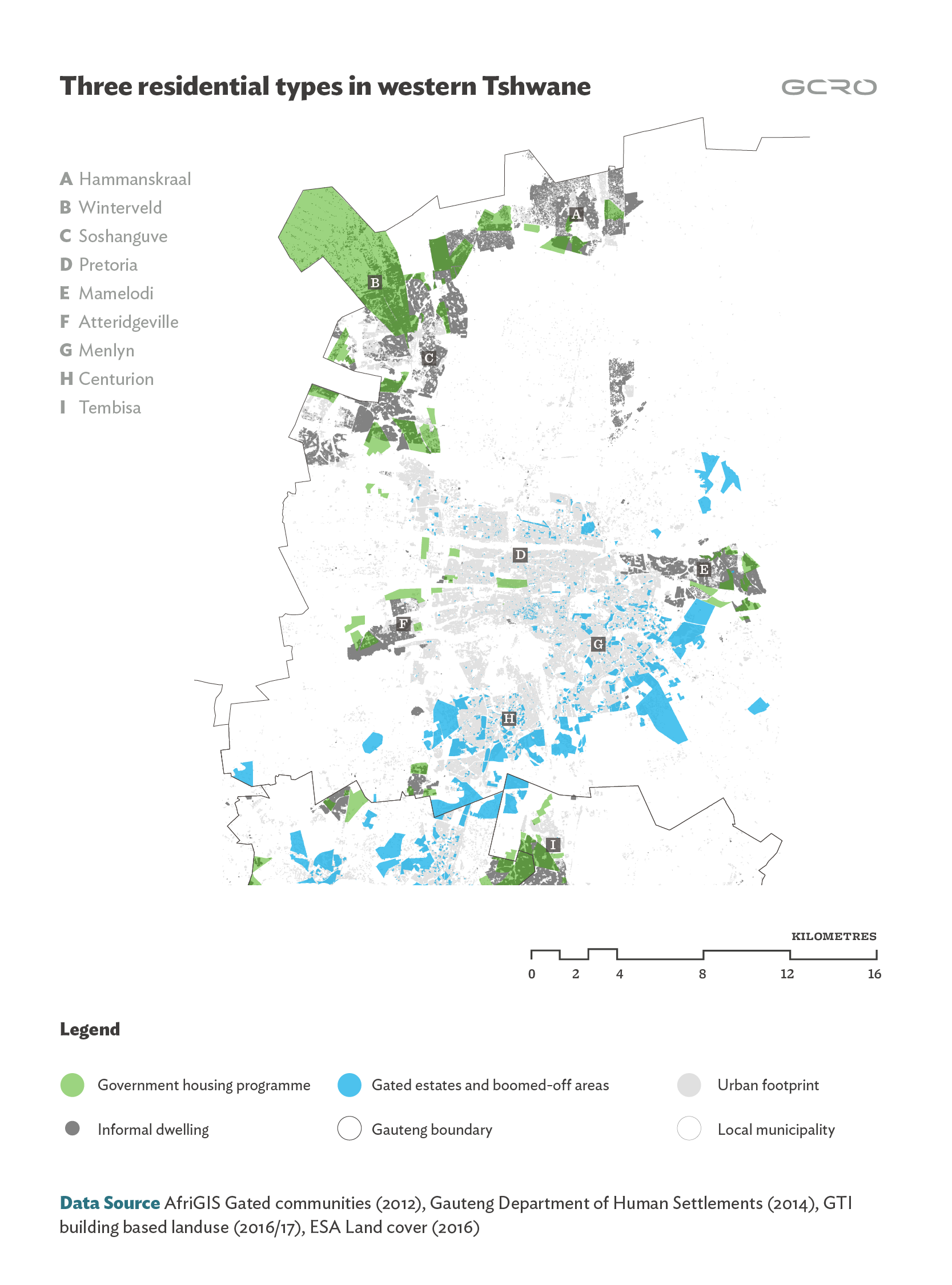 Map 2: A closer look at three significant drivers of residential change in a section of the City of Tshwane Metropolitan Municipality

Gated estates and boomed-off areas (the blue shaded areas on Map 1 and 2) cover a wide variety of markets and morphologies such as lifestyle estates for the elite and cluster developments for middle and upper-class residents. These residential developments have become a widespread form of housing in, or as an extension to, many former ‘whites only’ suburbs, both as a result of the redevelopment of old suburban stands with long-established houses, and the construction of gated estates on former smallholdings and agricultural land. Map 2 zooms in to show the preponderance of these forms in Pretoria’s south-eastern fringe between Menlyn and Centurion.

Gated estates are the dominant way in which the private sector currently supplies accommodation for relatively affluent groupings in society. These residential developments are distinctive for enclosing several dwelling units – sometimes entire suburbs – within a fortified perimeter with access control. While gated estates are generally more densely settled than apartheid-era suburbs, they are nevertheless a comparatively low density form of residential development in which each housing unit takes up far more land than housing in downtown areas or in townships. Gated estates and boomed-off areas are mostly located in the wealthy core of the province on highly valued land that is generally well serviced by basic infrastructure and various amenities (Graph 1). Because of their characteristics and the relatively limited supply, these developments tend to easily retain their market value and therefore remain unaffordable and inaccessible to the majority of society.

Informal dwellings (dark grey dots on Map 1 and 2) are often constructed for rental in the back yards of officially planned houses. Typically, owners of formal houses that were built during apartheid or as low cost houses since the end of apartheid will erect or allow others to erect informal dwellings on their stands in order to generate some rental income. Map 2 shows the concentration of informal buildings in and around Soshanguve, Hammanskraal, Winterveld, Atteridgeville and Mamelodi. Some informal dwellings, like those in backyards of formal township houses, benefit from being close to the basic service infrastructure provided to formal housing (Turok and Borel-Saladin 2016) while others are erected on vacant land. A previous GCRO analysis has shown how townships such as Soshanguve are composed of formal houses, informal dwellings and backyard dwellings (Hamann, Mkhize and Götz 2018) and how the spatial arrangement of these dwelling types can shift markedly over time. Informal dwellings are rarely built in close proximity to gated estates. They may spatially co-exist and be functionally connected in some places, for example when informal housing develops close to employment opportunities. But when this happens these two forms remain physically and socially separated by various barriers such as roads, walls, gates and security guards.

State funded housing is intended to absorb the housing backlog that manifests for example in the form of informal settlements. Government increasingly favours large projects rather than smaller projects to deal with this backlog (Ballard and Rubin 2017). A spatial layer provided by the Gauteng Provincial Government gives an indication of the spatial distribution of government housing programmes as recorded in 2014 (green shaded areas on Map 1 and 2). Notwithstanding some notable changes to these programmes since 2014, the maps show the way in which they often extend existing township spaces (on the edges of Soshanguve, Hammanskraal, Mamelodi and Atteridgeville) either by developing undeveloped land or by upgrading informal settlements. Public housing developments are generally also well-serviced in terms of basic infrastructure, but tend to lack the same aesthetic and environmental amenities of affluent areas (Graph 1).

Thus, in many ways, government housing reinforces historical residential patterns. However, looking closer, it is evident that a select few developments have broken historical patterns or at least changed the scale of residential separation (Charlton 2014). One such example is the Cosmo City development in north-west Johannesburg. Cosmo City offers affordable housing close to some areas of opportunity and also allows for greater socio-economic mixing within one neighbourhood than was traditionally the case with many older RDP developments. Because of some government housing developments and upgrading initiatives, the ‘rich’ and the ‘poor’ also live much closer to one another in areas such as Sandton/Alexandra and south of Mamelodi.

The spatial distance between the inhabitants of these residential developments is significant, but this spatial distance is also related to considerable socio-economic distance. Socio-economic inequality is high between residents of gated communities, government/RDP houses and informal dwellings. Graph 1 highlights selected indicators of socio-economic inequality, as drawn from the GCRO Quality of Life survey V (2017/18). The dwelling type and ownership status of the homes of all respondents who participate in the survey are recorded and this allows us to identify those who lived in the three residential development types shown in Map 1 and 2. The socio-economic inequalities are striking, more so when viewed in conjunction with the spatial separation discussed above. 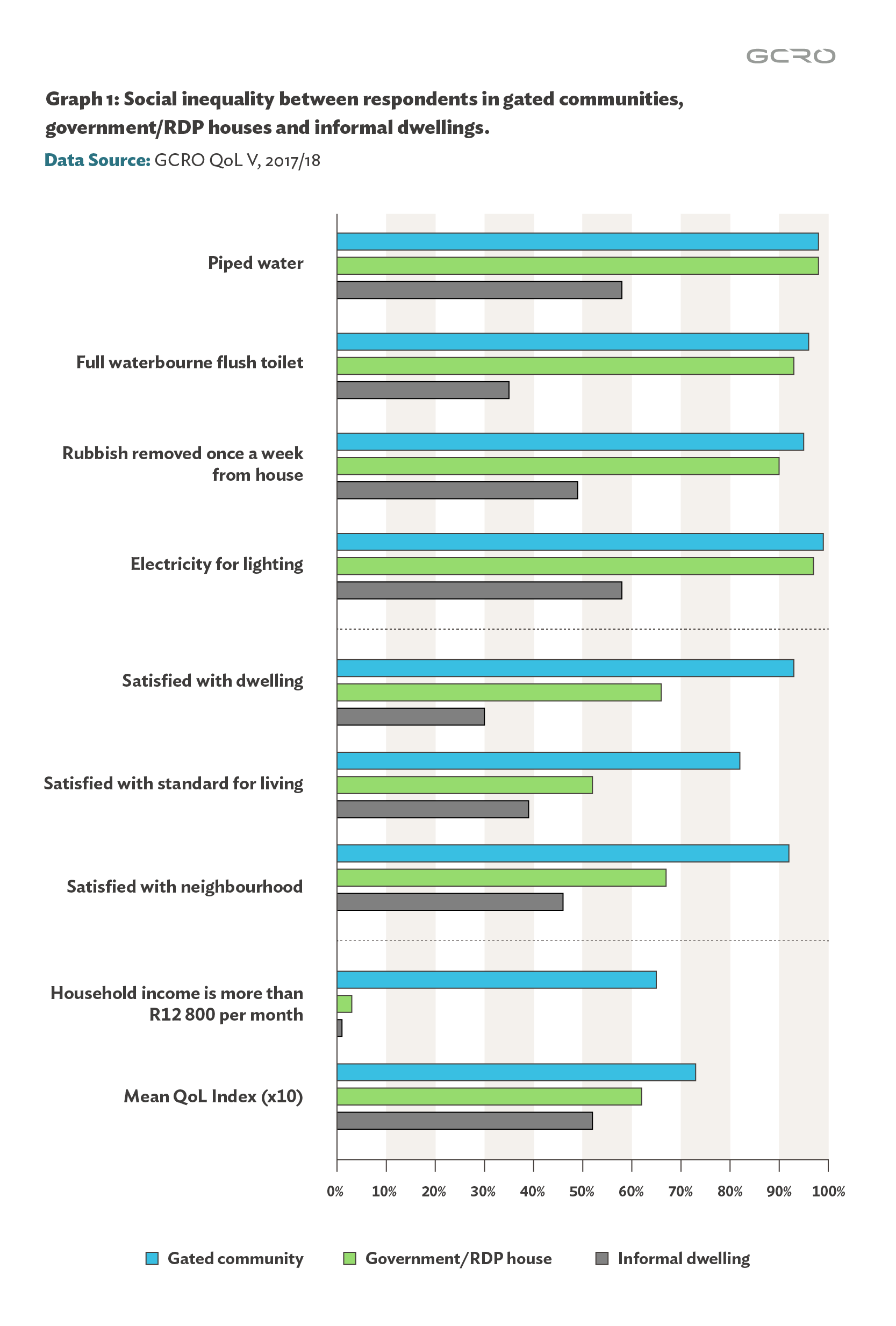 Comments and edits by: Darlington Mushongera and Graeme Götz