At 2 am most of us are at home and asleep, and the city-region is at its quietest. Yet not everyone is asleep, and many activities run 24 hours a day. While residential neighbourhoods and rural areas are quiet, commercial centres and areas with active nightlife often run late into the night and many manufacturing areas have continuous production. And even where most people are asleep and there is little activity, it doesn’t mean that the places we live in are dark.

Night light images are not just beautiful images of the earth. They also contain useful data on the intensity of light emitted, revealing the extent to which humans have shaped the world with urban forms and economic activities. The Map of the Month for October 2019 uses April 2019 night lights imagery to show where the brightest lights at 2am in the GCR are.

GCRO Maps of the Month often use high resolution spatial data that has been purchased, or layers of information on the complex realities of the GCR derived from our Quality of Life Survey. This month we take a slightly different perspective by using freely available data at a 1 km grid scale and using open source software (QGIS). It provides a useful illustration of what is possible as data and software become more freely accessible. The specific data source used for this map was the Visible Infrared Imaging Radiometer Suite (VIIRS) Day/Night Band on the National Oceanic and Atmospheric Administration (NOAA)-NASA Suomi National Polar-orbiting Partnership (NPP) satellite. The data that is used was developed by the Earth Observation Group (EOG) at NOAA/NCEI. EOG produced composite images that have been filtered to remove stray light, such as lightning, and that focus on the intensity of light around the globe in the form of average monthly radiance values with units nanoWatts/cm2/sr.

Figure 1 shows the intensity of light at 2am across the wider GCR area that extends beyond the Gauteng boundary. Each pixel represents 1 square kilometre. The dark purple colour represents the darkest areas at 2pm and the white the most light intense areas.

The image shows interesting trends on where in the GCR the lights are the brightest at 2am. It isn’t that easy to pick out the most light intense areas on a two dimensional (2D) map so we have also created an interactive 3D model of the data to explore. The height on the peaks of the 3D model is from the light intensity score for an area. So the higher the peak the more intense the light.

Figure 2: Animation of a 3D model of light intensity. To explore the model yourself, click here. 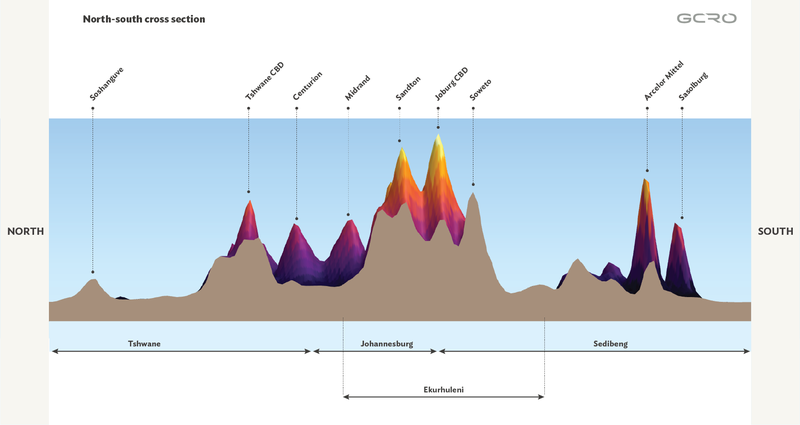 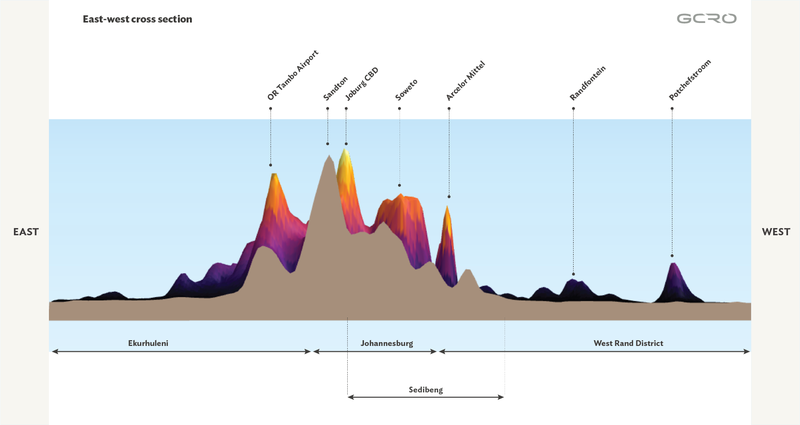 The most light intense areas in the GCR are shown in table 1 below: 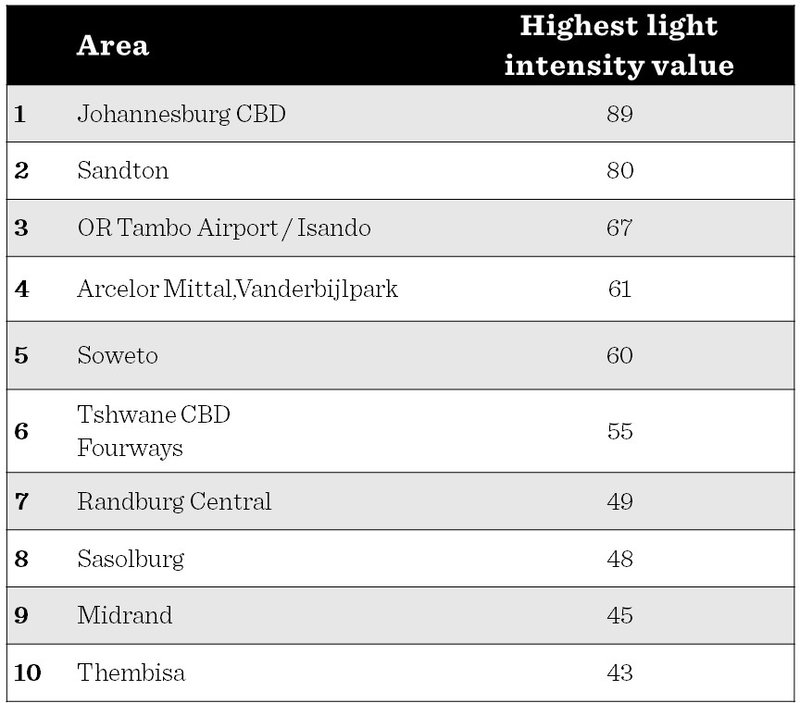 Light intensity data provides a useful indication of economic activity. The commercial hubs of the Johannesburg CBD and Sandton are noticeably the most light intense places in the GCR. This is followed by activity around OR Tambo International Airport. It is interesting to note that a number of the most light intense places at 2pm are industrial centres where activities run 24 hours a day. This includes the noticeable peaks from Arcellor Mittal and Sasolburg in the south (Figure 3). Tshwane and Fourways both have very similar values for light intensity, but the Tshwane CBD covers a larger area. The final two areas in the list are Midrand and Tembisa, but their scores are only half of the Johannesburg CBD areas.

As we are reminded whenever electricity systems fail or are turned off, lighting up a city at night has had many positive outcomes. Artificial light allows us to work and socialise after sunset. Street lighting makes our roads safer. Yet, night lights also have a darker side. Light pollution occurs when light spills into areas where it is not wanted or needed, often as a result of urban expansion. Light pollution from artificial light can alter the behaviour of plants and animals (for example by affecting the paths of migratory birds) and endanger ecosystems. In humans light pollution can alter our biological rhythms and impact on our health. Light pollution is also a symptom of another serious problem affecting the entire planet – global warming. Most of South Africa’s electricity for lighting comes from coal fired power stations and this burning of fossil fuels for lighting increases carbon dioxide levels in the atmosphere, which in term contributes to climate change. Many interventions aimed at energy saving can have positive impacts on limiting light pollution. Urban planners, engineers and building owners can all help manage levels of light pollution as the GCR continues to grow and develop.