The map shows that median household income grew in nominal terms in 504 wards (in all but three wards) over this 10-year period, but it did so at different rates. Wards with a darker shading grew at a faster rate than wards with lighter shading. The lowest rate of growth was 0.85 (in a ward just north of Westonaria) and the highest rate of growth was 14.74 (in a ward on the eastern edge of Tshwane).

If one knows the economic geography of the province it is possible to see that some rich wards grew faster than some poor wards. For example, in 2011, the median income for a ward near Sandton was 3.8 times larger than its 2001 median household income. By contrast, the 2011 median household income of a ward in Ennerdale was 1.2 larger than its 2001 median. The following analysis shows more systematically whether wards that were rich or poor in 2001 were growing fast or slowly. 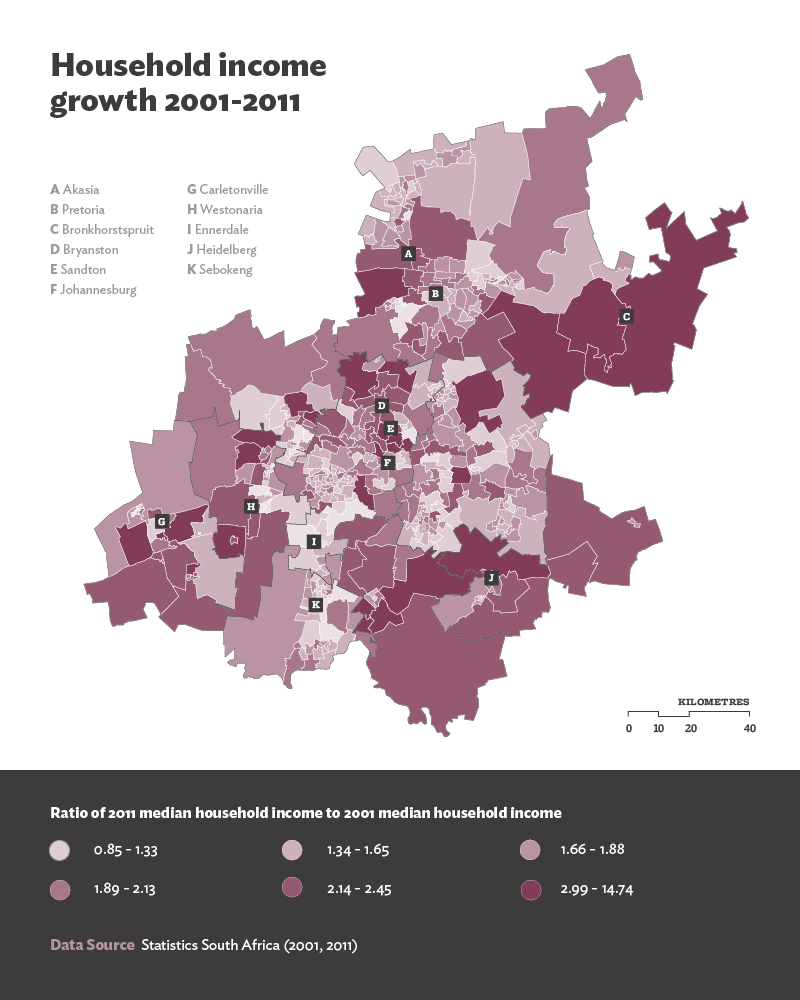 Figure 1. Income growth patterns between 2001 and 2011 in selected wards

The ‘convergence’ or ‘catch up’ hypothesis in economics predicts that income inequality will reduce over time because low-income regions will grow at a faster rate than high-income regions. This ‘convergence’ or ‘catch up’ is meant to happen in part because poorer regions have lower labour and other costs than already developed regions, thereby attracting businesses seeking lower-cost locations. Did ward level median incomes converge between 2001 and 2011? In Figure 2, we use Gauteng’s provincial median household income in 2001 (R 27 080 per annum) as the line to distinguish between ‘poor’ and ‘rich’ wards, and we use Gauteng’s provincial growth rate between 2001 and 2011 (a ratio of 1.95) to distinguish between ‘low’ and ‘high’ ward growth rates. We call wards with a median income below the province-wide median in 2001 ‘poor’ wards; wards with a growth rate lower than the 2001-11 provincial median growth rate ‘low-growth’ wards; and so on. 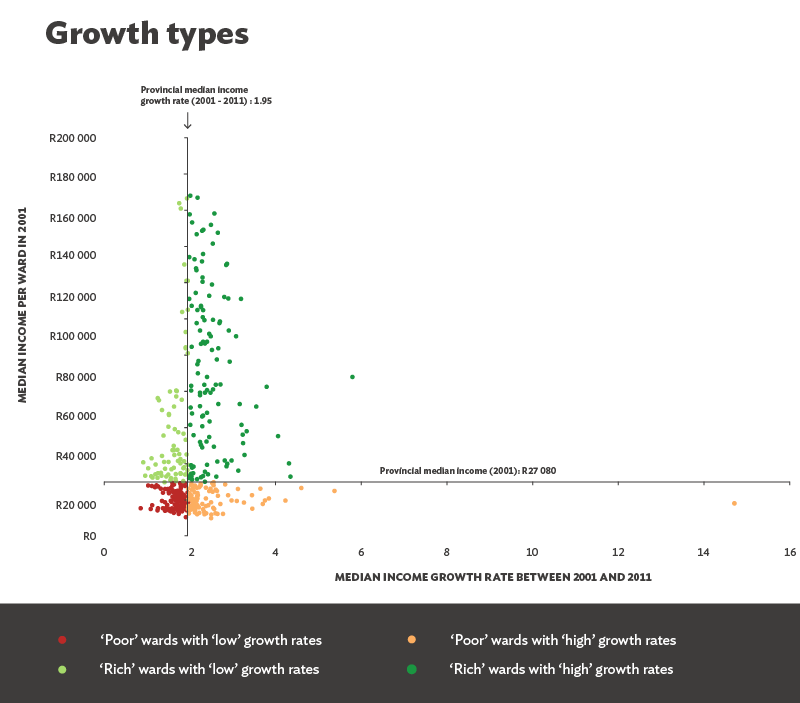 Figure 2. The relationship between wards’ median annual income in 2001 and their median income growth rate between 2001 and 2011.

Figure 3 presents summary data for the entire province. It shows that 122 wards – about a quarter of those in the province – occupied the upper right quadrant of Figure 2 as rich wards with a high growth rate. The average growth rate across these wards was 2.51. By contrast 199 wards, 39%, occupied the bottom left quadrant as poor wards with a low growth rate of 1.71 on average. 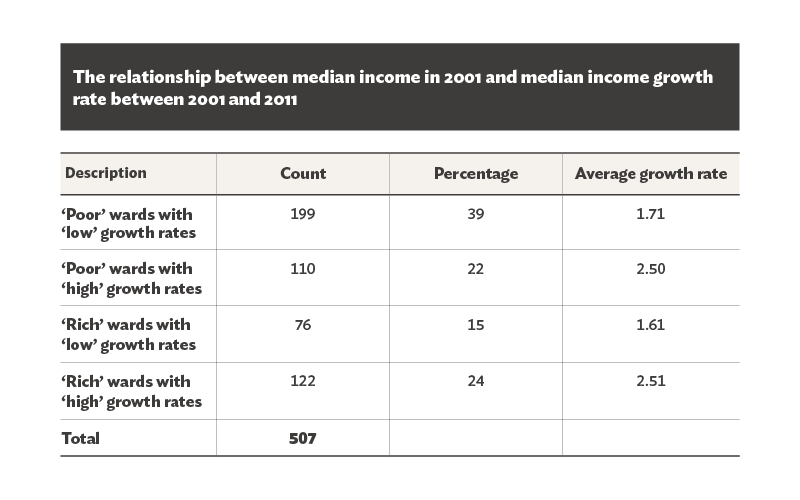 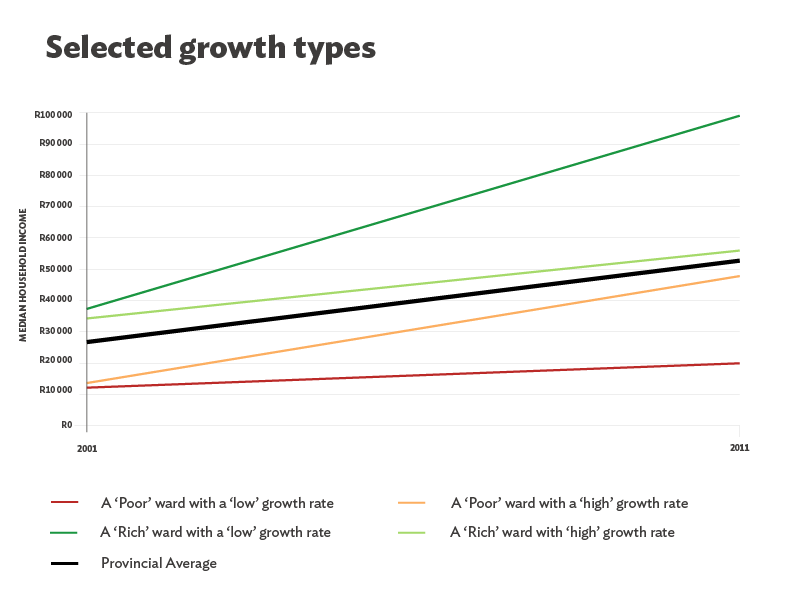 Figure 4. Income growth patterns between 2001 and 2011 in selected wards 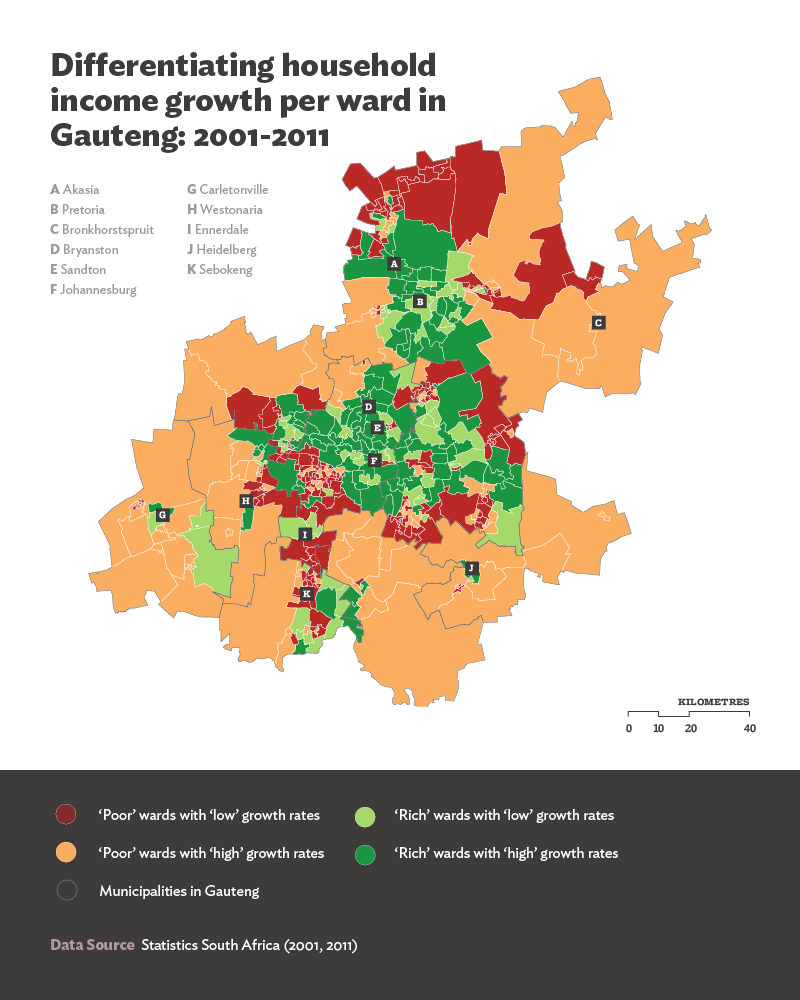 Wards coloured red are those that started from a low base in 2001 and whose median income grew more slowly than the median growth rate. The location of red wards is startling, and has profound implications. Red wards – those that were already poor and are failing to catch up – are mostly in parts of the GCR designated as African townships under apartheid. Most of Soweto, Tembisa and Ivory Park, Katlehong, Thokoza, Vosloorus, KwaThema, Orange Farm, Sebokeng, Mabopane, and so on, are all red. This suggests the ongoing adverse incorporation of township areas even during a period which saw strong economic growth and the massive expansion of social grants.

The number and geographical location of red wards is deeply concerning. It is worth emphasizing the point by noting that while only three wards did not grow in nominal terms between 2001 and 2011, adjusting median incomes by inflation reveals a much more worrying picture. Adjusting for inflation, the 2001 median income of any ward should have been at least 1.789 times higher in 2011. We compared the actual 2011 median incomes of each ward to what their 2001 incomes would be in 2011 when adjusted for inflation. An alarming 168 wards fell below 0, which means they got materially poorer in real terms over the 2001-2011 period. Again, with a few exceptions, most of these wards were in township areas.

Lastly, we applied a spatial econometric model (Sergion & Montouri 1999) to test whether there is convergence or divergence overall. A negative result would mean that there is convergence over time and therefore a reduction of inequality, while a positive number would mean divergence and an increase in inequality. The result was a positive number (0.7%), confirming that at an overall level, there was no catch up. In effect, inequality within the province is widening with the growth of many already affluent wards outpacing the growth of poorer wards.

Further analysis of these issues is part of a forthcoming GCRO book, edited by Dr Koech Cheruiyot, The Changing Space Economy of City-Regions: The Gauteng City-Region, in production with Springer.

Link to projects: Economic geography of the GCR