Urban peripheries are often thought to be the opposite of denser metropolitan core suburbs and central business districts. We might imagine that as we move away from city centres, urban settlement gets progressively less dense until it is rural. However, the Gauteng City-Region is a multi-nodal urban formation, and this map of the month shows the importance of Mabopane Station as a commuter node even though it is located 40 minutes north of downtown Pretoria by car.

This map is made possible by a survey of commuters collected in 2012 by Demacon research company on behalf of the Passenger Rail Agency of South Africa (PRASA). It is also enabled by data from eight weeks of in-depth interviews conducted in 2017/18 by the Gauteng City-Region Observatory (GCRO).

Figure 1 uses the Mabopane Station to highlight the extremely long daily commutes that define life for many people in the northern periphery of the GCR (for a province-wide picture see October 2014 map). The map shows Mabopane Station as a major point of origin, transfer, and destination. Orange dots and blue squares respectively represent the origins and destinations of trips. Orange lines are inbound trips of all modes into the station, blue lines represent outbound trips on buses/taxis and blue crossed lines represent outbound rail trips.

The Mabopane, Winterveld, Soshanguve, and Garankuwa townships were established by the late 1960s, and are now part of the City of Tshwane Metropolitan Municipality. The formation of these contiguous areas for Africans contributed to the grand apartheid plan – to confine the majority population in peripheral, homeland areas. Together with places such as Babelegi, Rosslyn and Ekandustria, the sites of decentralised industries in and near homelands, such spatially confined townships came to be characterised in terms of ‘displaced urbanisms’. By 1990, about 400 000 people were commuting daily from townships in northern Gauteng (including Atteridgeville and Mamelodi) to the core areas of Tshwane, where most of the jobs were located (Hattingh and Horn, 1991). Of this total, 160 000 commuters were from Mabopane, Winterveld and Soshanguve; 48 000 commuters were from Garankuwa; 20 000 from Temba and 4 000 from the former KwaNdebele (ibid). The majority of trips occurred during peak hours, a one-way trip lasting for about an hour (and up to 3 hours for former KwaNdebele). 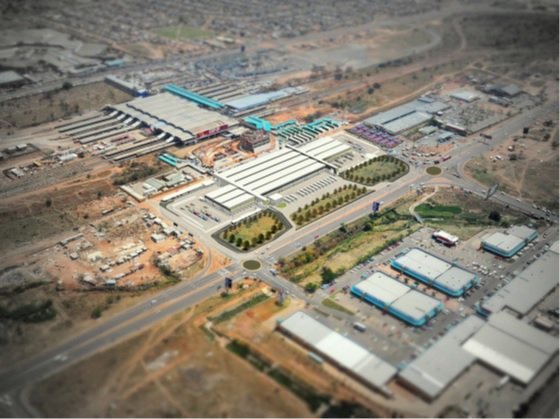 Figure 2: An aerial view of Mabopane Station precinct: a collage of real and design images.
Source: City of Tshwane (2013).

The map (Figure 1), as well as the survey and qualitative data behind it, signal the critical role that Mabopane Station plays for the mobility and livelihoods of thousands of people in these displaced, peripheral areas. It provides cheaper train services and integrates – in one facility – train, bus, and taxi transport modes for the convenience of commuters. The Demacon report estimates that in 2012 about 70 000 commuters were using Mabopane Station each day to reach different places of work or to work at the station, to conduct businesses, shop and bank (see Figure 2). The data is silent on the numbers and proportions of people using the station to get to educational facilities or visiting friends and relatives.

Overall, the map shows that movement is both centripetal and centrifugal. Those arriving at the station have come on inbound trips from Pretoria and its surrounding areas, from different parts of the northern periphery, as well as from Johannesburg and Ekurhuleni, and as far afield as parts of the North-West Province. Most arrive by minibus taxi, with smaller proportions arriving by train, by walking, or by bus. The station represents a major destination point for many commuters. It is also a transit point for others, who take outbound journeys to the broader Pretoria areas, Johannesburg and Ekurhuleni.

A key feature of the map that stands out is that many outbound commutes are by minibus taxis. Although trains are cheaper, lack of investments in the rail infrastructure and train fleet makes this service unreliable, resulting in minibus taxis being the preferred form of transport. Users complain about trains getting ‘stuck in the middle of nowhere’ resulting in them often getting to work late and delaying stocks for informal traders, in turn tarnishing the image of their areas, and rendering residents of these areas unemployable or affecting entrepreneurship. On the other hand, train users may evade paying fares, including the use of unauthorised exit points at stations such as Belle Ombre (Marabastad).

The economic utility of the Mabopane station is crucial given the potential it has to become a core development node in the GCR. Alongside the mechanised, skills-based Rosslyn industries, Mabopane Station may be seen as replacing the now defunct labour-intensive industries of the past established in deconcentration points such as Garankuwa and Babelegi. In particular, the Central City shopping mall, the Soshanguve Plaza, the nearby new shopping complex, and the revamped Mabopane Station itself makes the station area a nerve centre of an emergent local economy. Together with the nearby Mabopane Unit N industrial area, the station area boasts an extensive informal economy, a local manufacturing and service base, as well as a range of formal commercial establishments (clothing/accessories, furniture, hardware, grocery, fast food, personal care, speciality/value goods, gifts, books and confectionaries) that draw people from far and wide.

Scale, belonging and exclusion in Gauteng

Landscapes of peripheral and displaced urbanisation