This multi-year project interrogated the Gauteng City-Region as a concept, construct, political device and mode of governmentality through a series of well-structured outputs that grappled with the social, political, economic and environmental complexities of the city-region, investigating policy decisions, governance concerns and the city-region’s future.

As part of understanding the research of the GCRO on the Gauteng city-region within current urban debates, a key part of this project began mapping the terrain of urban research globally. To this end, a beta dataset of urban research institutes in the UK and US was compiled during 2020. In addition, from April 2020, several GCRO researchers attended a series of international urban convocations convened by Simon Marvin and Abdoumaliq Simone to understand how urban researchers responded to the COVID-19 pandemic.

The objective of the exhibition was to locate visitors to Metropolis Annual Meeting held in Johannesburg in August 2018 in the Gauteng City-Region highlighting the key characteristics of the city-region. The key characteristics tied into the theme of Inclusive Cities and City-regions and were illustrated using data and outputs of the GCRO. In this way, the exhibition showcased how GCRO research informs urban policy in Gauteng. The title of the exhibition was “We are here”. It played on a frequently-used device encountered in new spaces that locates the user on a map with the words ‘You are here’. The concept was intended to provide a snapshot of Gauteng at that moment in time. This is ‘where we are’ in terms of various dimensions of the city-region. The centrepiece of the exhibition was a large digital display of maps of Gauteng according to different thematic areas. Alongside this, there was a long panel and 4m high tower illustrating the content of the exhibition. The exhibition, which was open to the public for the four days of the event, included:

The first output of this project included the exhibition at the Cities Exhibition at the Seoul Biennale of Architecture and Urbanism in 2017. The exhibition was a digital and showcase existing work as well as some new conceptual visualisations. The theme was ‘Shifting Borders and Building Bridges’ which explores the boundaries of the GCR and the borders within as well as the role of the GCRO in bridging government departments and local government and academia.
Borders are both material and unseen, constructed and imaginary, fixed and fluid. In recent years we have seen the continued relevance of international borders and how these affect the lives of people in different places. While political borders remain as pertinent as ever, this exhibition examined kinds of ‘urban borders’ in the context of the Gauteng City-Region (GCR).
Cities in South Africa are infamous for their divided and unequal geographies that are a legacy of the colonial and apartheid planning policies. Despite significant efforts to integrate the GCR, apartheid’s visible and invisible borders and barriers remain both in the material landscape and in the economic and social fabrics. Although the history of apartheid is particular to South Africa the inequality that the city-region faces resonates across many parts of the world.
The exhibition explored the making, shifting and bridging of urban borders through four perspectives.
The Spatial story map relays how political borders of provinces and ‘homeland’ states have been abolished with the end of apartheid and the first democratic elections in 1994, but how spatial segregation remains and recurs through other shifts have occurred in the last twenty years.
The Social story map illustrates how racist apartheid laws have re-emerged as social barriers which can manifest in the urban landscape in physical forms like gated communities.
The Resource story map shows how the broader context of the landscape and natural resources worked as barriers shaping the history of development in the city-region, and how they will also shape its future.
The Institutional story map explores how both government and academia are navigating these complexities while also encountering institutional and knowledge borders. 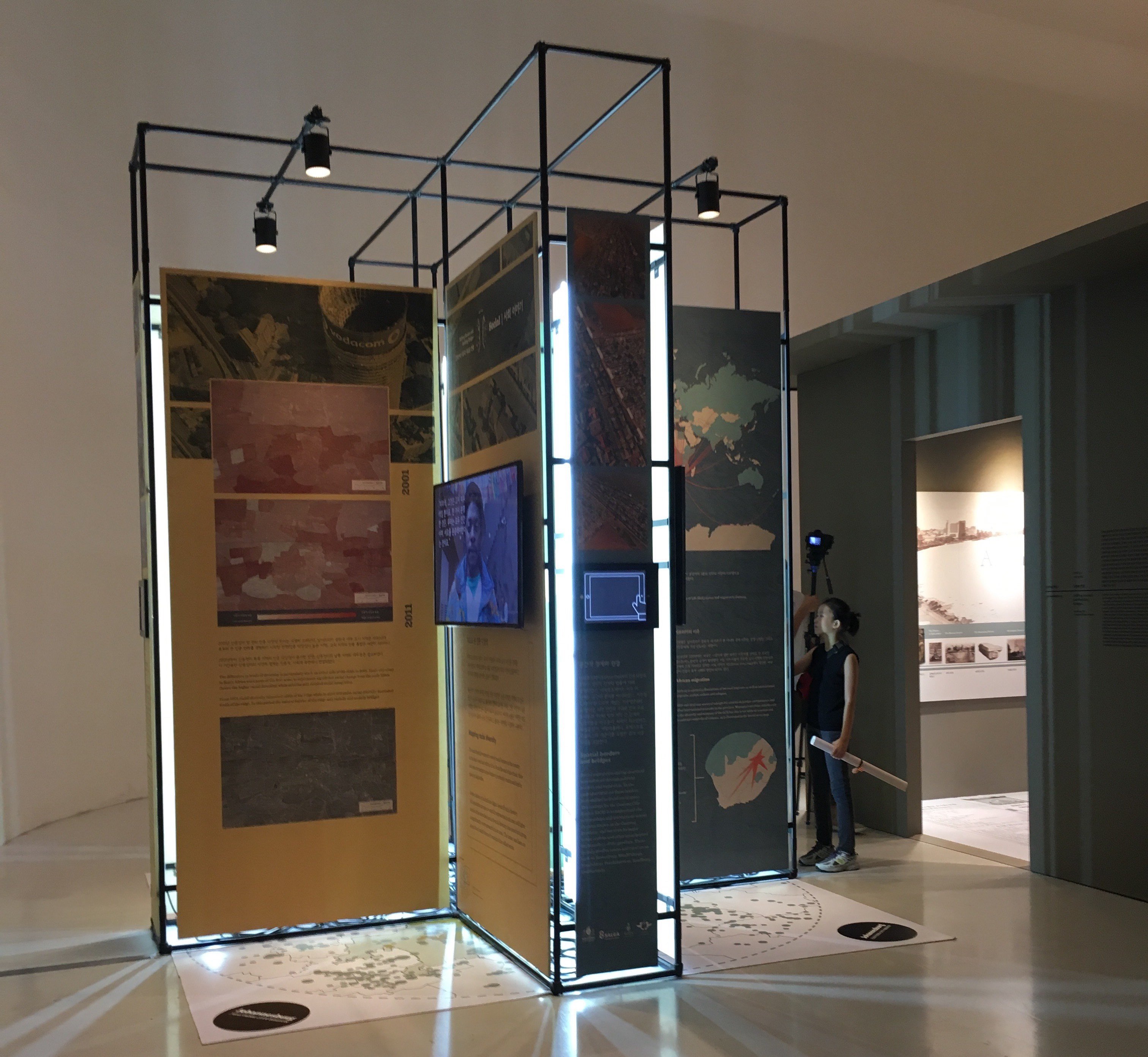 Map of the month

The GCRO's Shifting borders and building bridges (Cities exhibition at Seoul Biennale) was featured in the Wits news; on Biz Community and on Architect Africa in August 2017.