It is often said that entrepreneurship boosts economic growth and helps to fight poverty and inequality. This is particularly relevant in Gauteng, which is currently experiencing deep socio-economic distress as a result of the pandemic (GCRO, 2021). The GCRO Quality of Life Survey 6 (2020/21), conducted between October 2020 and May 2021, asked respondents the question, ‘Are you currently the owner of a business, one that you were responsible for starting up (even if you are not working in this business now)?’ Of the 13 616 respondents interviewed 15% reported owning a business. However the percentage of business ownership varies considerably by whether respondents have been economically impacted since March 2020 (i.e. lost a job, had salary and working hours reduced, or closed business permanently), and by race, sex and education levels, revealing fascinating dynamics in entrepreneurship in the current context. This should be read together with Vignette 41 that considers patterns of new employment for those who lost livelihoods during the COVID-19 period.

[Read with the designed Vignette by clicking Download Vignette above]

This Vignette considers some of the dynamics of business ownership in Gauteng in the context of the severe economic downturn over the COVID-19 period. It explores three aspects:

There was a three percentage point decrease (11% to 8%) in the proportion of QoL respondents owning businesses between 2013/14 and 2015/16. Since then there has been a steady increase, up from 8% in 2015/16 to 15% in 2020/21. This seems counterintuitive in the context of a generally strained economy, which has also been very heavily impacted by COVID-19 over the last year.

In an attempt to explain the growth in the proportion of business ownership particularly in a context of COVID-19, we looked at the impact of some of the changes that have occurred in respondents' lives since March 2020 – notably with regard to job losses, reduced salary and working hours, and having to close businesses permanently – comparing those who have been economically impacted to those who have not.

As presented in detail here, since March 2020, 11% of QoL respondents lost a job, 19% had their salary and working hours reduced and 4% had had to close businesses permanently. We analysed which of these respondents were then business owners at the time of interview. For those who had to close businesses, the percentage who now own businesses is massively higher (at 74%) than the average for all QoL respondents (15%) and for those not impacted at all by any of the three economic stresses (12%). This is perhaps to be expected, as these are pre-existing entrepreneurs who are more likely to be willing to try again with new ventures. Interestingly, for those that had lost a job the proportion now owning a business is also higher (at 18%) than the average and for those not impacted at all. For those who had salary & hours reduced, the percentage of business owners is a lot higher (22%) than the average and those not impacted at all. This suggests that those who have been economically impacted by the pandemic have had to do something – such as starting new ventures in an effort to sustain their livelihoods – which has ironically driven up business ownership in the face of economic downturn. 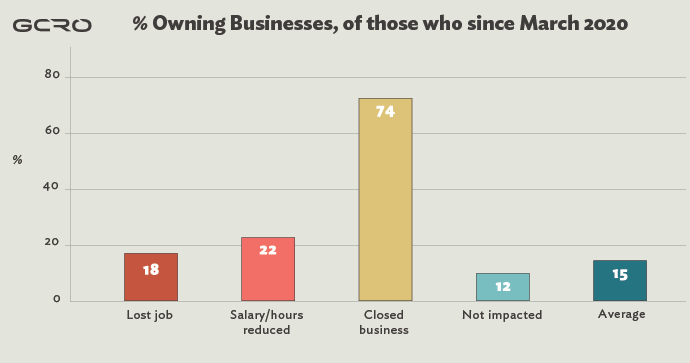 The QoL data also shows that there is an uneven capacity to start new businesses by race, sex and education levels.

While the data shows a general increase in business ownership across race, sex and education levels, there is differential change over time. There are larger increases for whites than for Africans, males than for females, and for those with higher education qualifications than those with lower levels of education. This mirrors and exacerbates historical inequalities, and indicates very worrying variable levels in the ability to survive the economic crisis along historical lines of race, gender and class. 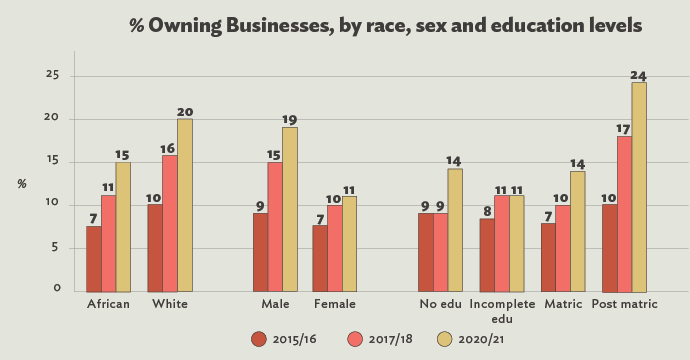 Comments and inputs by Richard Ballard and Graeme Götz.