On 28 May 2018 applications through an online system for enrolment in Gauteng schools for 2019 formally closed. This is an anxious moment for many parents and their children seeking admission to schools. For some, the choice of a local school is an obvious one, and the likelihood of admission to the selected school is high, but for many others, there is a great deal of uncertainty over whether they will get their child into the school they want.

Uncertainty is heightened because policies around admission are currently changing. In 2014, the Federation of Governing Bodies of South African Schools (FEDSAS) – a national representative organisation for school governing bodies – took the Gauteng MEC for Education to court with a number of objections to the 2012 school admissions regulations. As part of this application, the NGO, Equal Education, submitted evidence against the default 5 km feeder zone on the basis that it replicated apartheid spatial inequality. The case reached the Constitutional Court, which in a May 2016 judgement upheld the regulations on the whole, but ordered the Gauteng Department of Education (GDE) to formally determine feeder zones, and move away from the 5 km default radius currently in use. The judgement provided no guidelines on how the regulations determining feeder zones should be revised, but gave the GDE a year to undertake the revisions. In May 2017, the GDE was given an extension until June 2018 to complete this process. While a new policy is being developed, in part through an extensive consultation process, admissions criteria related to distance from a school were not finalised in time for the 2019 enrolment process.

Demarcating feeder zones and the revision of admissions policies is deeply political but also technically complex. A finely tuned perspective, sensitive to both political and social concerns, and firmly grounded on hard evidence, is essential. GCRO’s May 2018 Map of the Month illustrates some of the issues at play. Using 2016 data from the GDE we map the percentage of learners at each ordinary public school (primary and secondary) in Gauteng who travel more than 5 kms to their school. 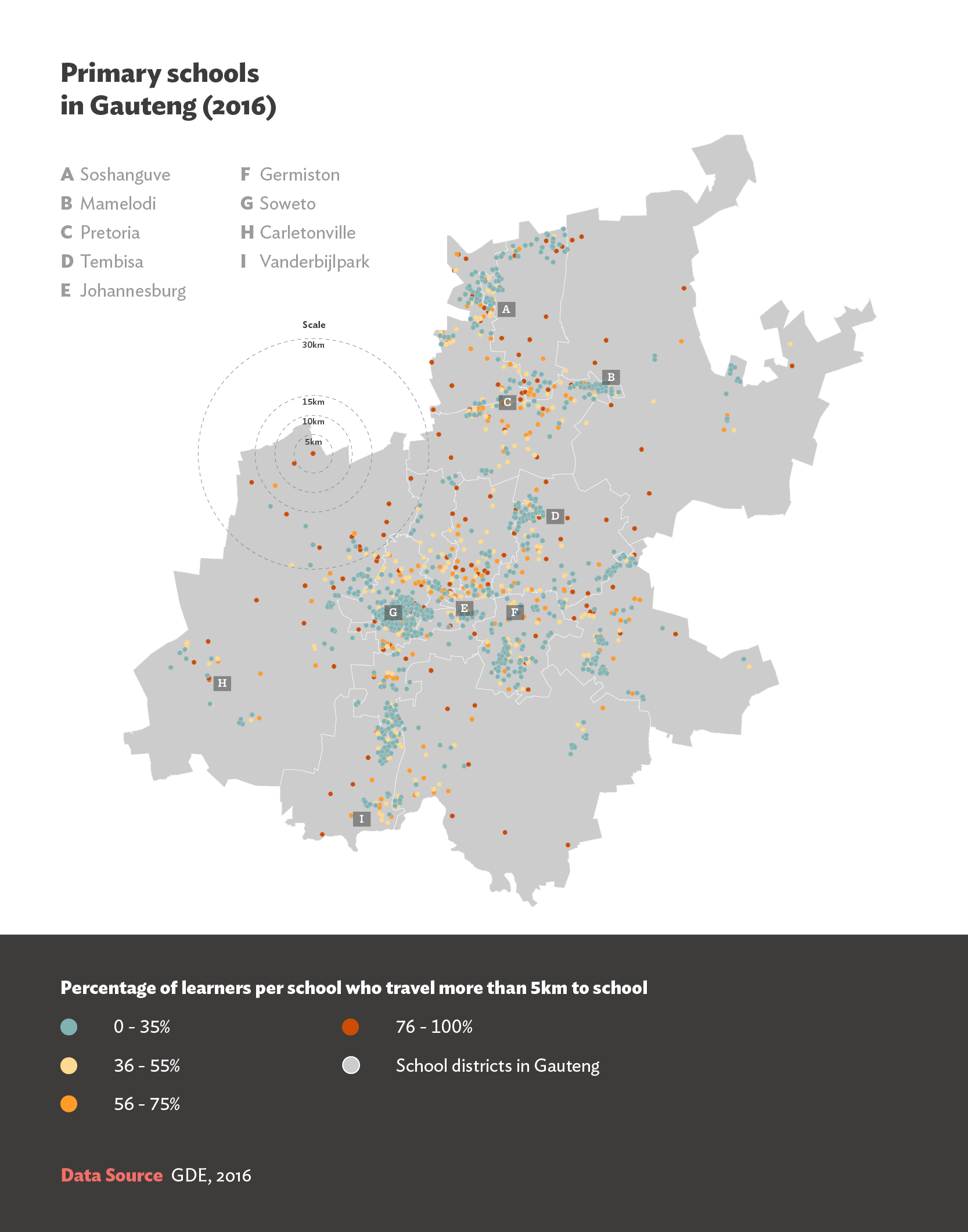 Commutes are variable across schools. The maps show that the proportions of learners travelling more than 5 km vary greatly across schools – ranging all the way from 0% to 100% of learners. Some of this variation certainly relates to population density in the areas around a school. For example, outlying areas around Carletonville and Vanderbijlpark feature a number of schools where almost all learners live more than 5 km from the school. By contrast, in densely populated areas, such as Pretoria, Tembisa, central Johannesburg, and Soweto, schools have large numbers of learners living within the 5 km radius. Notwithstanding this general trend, however, there is extensive and interesting variation within residential areas, and in many instances, neighbouring schools appear to draw learners from very different areas. Understanding what is behind the decisions parents make around where to send their children to school, and what this means for the provision of equitable access to quality education in the context of the Gauteng City-Region, is one of the questions the GCRO’s new research projectaims to explore.

The current default 5 km feeder zones replicate apartheid geography to a substantial extent.The apartheid system spatially separated people and institutionally separated school governance (including curricula and funding) by population group, with schools for black learners receiving far fewer resources. Despite significant efforts on the part of the GDE to ensure equitable access to quality education for all learners, the quality of education (both actual and perceived) is highly variable across the province, and remains strongly shaped by the geography of apartheid. The current default 5 km feeder zone, in principle, hinders people outside of suburban areas from accessing historically more advantaged centrally-located schools. This map of the month shows that the majority of learners in township schools (Soshanguve, Soweto, Tembisa) come from within a 5 km radius of each school. Understanding the implications of feeder zones for equity is one of our critical research questions.

Over a third of learners still travel more than 5 km to access education. While in theory a 5 km feeder zone as key criterion for school admissions limits equitable access, in practice feeder zones have not eliminated mobility: 37% of learners access schools beyond the default 5 km feeder zone. Our mapping suggests that schools in peri-urban areas have the highest percentage of children travelling long distances. Our maps also show that many schools in suburban areas have high proportions of learners travelling further than 5 km to reach school. There are various reasons why this might be the case. For example, the admissions policy prioritises learners residing within the 5 km zone or their parents’ place of work within the feeder zone. Another admissions criterion is related to existing siblings enrolled in the school, which may override considerations of distance. The maps confirm that the current feeder zone policy still permits children to access schools fairly far from their homes, suggesting that some parents and learners in Gauteng are able to exercise a level of school choice. The complex dynamics behind these patterns reflect decisions at the family and school levels through this admissions policy.

Most schools are still racially segregated. This is despite the fact that schools have been open to all population groups since 1994. In 2016 there were over 2000 schools in Gauteng but 61% of these schools had only Black-African learners enrolled and 7% of these schools had more than 80% white learners. Just over 20% of Black-African learners were in former white designated schools, while 99,7% of white learners remained in former white schools. Although approximately 30% of schools have a level of integration, this has largely occurred in historically white schools.

There are many costs to travelling further to access education. Reliable and safe transport for learners is not always accessible and can be very expensive. Only those learners and parents who can access and afford transport to schools further away can make that choice. Long commutes have additional costs for the learner who may bear the brunt of less time to study or rest. These costs are disproportionately borne by black families living in townships but despite the heavy costs, many families are willing to bear these costs. 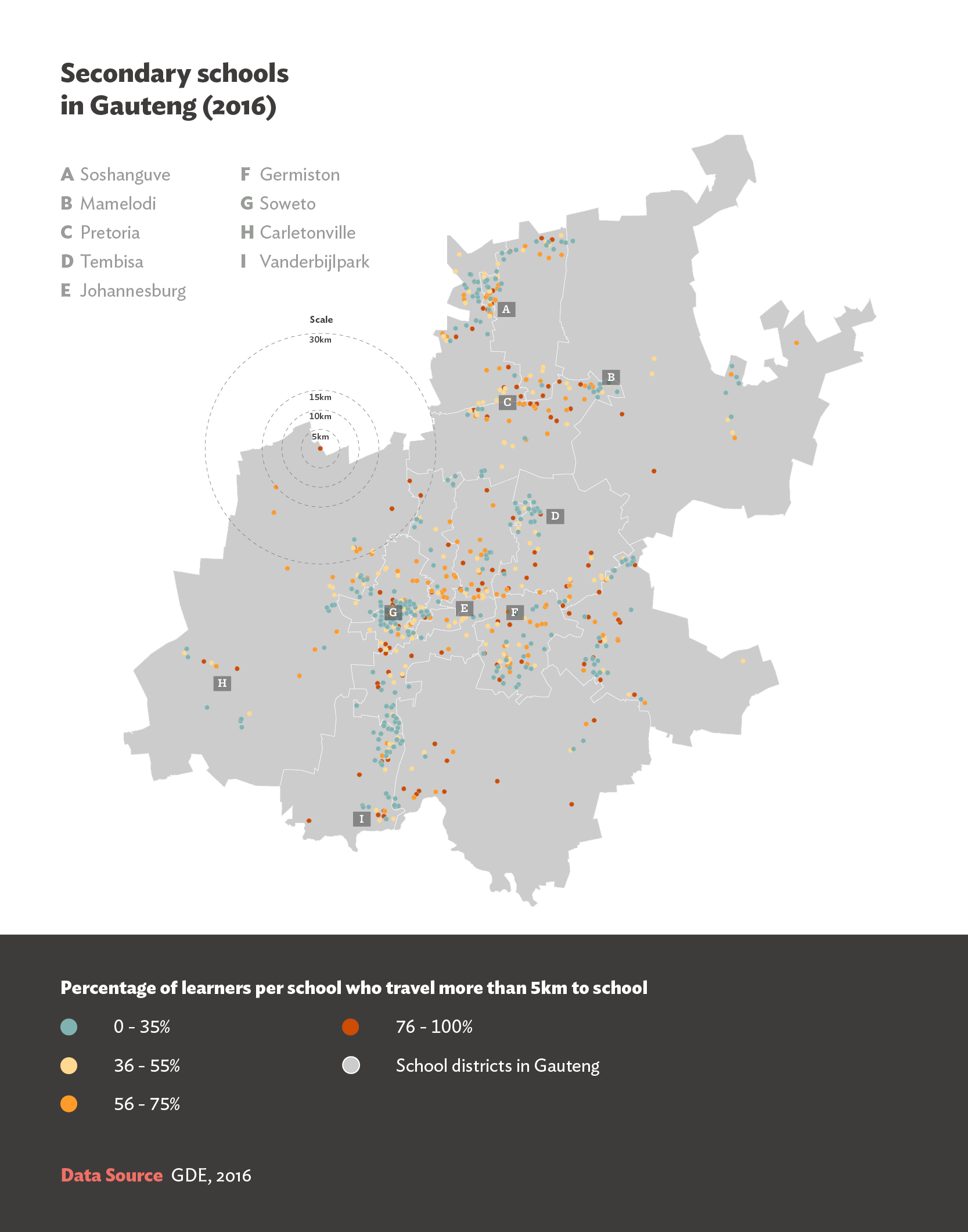 Choosing a school is not easy. Families weigh multiple factors when choosing schools, and often do so in the face of incomplete or imperfect information. Parents may consider factors such as the teacher-learner ratio, school size, school ethos, school reputation, facilities, number of classrooms, matric pass rate, sport fields and teams, language of instruction, racial composition, proximity to home, proximity to work, location in a middle-class suburb, school fees, or status as a former model-C school. Furthermore, different families may weigh the same factors differently – for example, the ethos of a school may be more important for some parents and learners, while for others the language of instruction is more significant. We are far from understanding how families in the GCR choose schools.

Schools are not always located where they are needed. Schools are constructed to serve a surrounding community and need to account for the population density of residential areas. However, Gauteng is a dynamic province with a shifting and growing population. Some areas have seen enormous growth while other areas have been declining. Although the GDE needs to respond to these changes, schools and their physical assets are less dynamic than the people they serve. The GDE needs to work with 9 municipalities in Gauteng to plan new schools and to forecast population changes because the planning of settlements and the use of land is the mandate of local government.

Finally, education enables social mobility. In a context of high inequality and high unemployment, access to education is seen as the gateway to social mobility, and in recent years, the tensions around public school admissions have reflected this. While the decision to send a child to a local school is straightforward for some parents, for others it is far more complex. For many, there is much at stake.

The revised admissions policy currently being developed will attempt to address all of the issues raised here and will be reviewed through a public participation process with all relevant stakeholders. Further research is required to generate an understanding of the complexities of the education system in Gauteng. GCRO has initiated a long-term project, Gauteng’s Geography of Education, to explore the spatial dynamics of education in Gauteng.

As part of this new research arena, we would like to hear from you. What are the reasons you have chosen your particular school? Has your child been able to attend the best school possible? What has been your experience of attending a school outside of your immediate neighbourhood or community? How do you cope with long commutes as a parent or learner? All stories are of interest to us whether current or from the past. Please send us your messages or voice notes via WhatsApp to this number 078 047 7272. All stories will remain anonymous but will help us to understand your personal experiences. These stories may be quoted in research related publications in the future.

A note on the data:

This map was generated using school-level data from the Gauteng Department of Education. Distance travelled to school is grouped into 5 km intervals, beginning with less than 5 km, and ending with 25 km or more. For each school, total school enrolment is provided, along with the number of learners falling into each of the distance categories. This does mean that we do not know exactly how far each learner travels, which is a limitation.