The April 2016 Map of the Month focuses on the spatial distributions of tertiary education qualifications and median household income in Gauteng (Map 1). Government in the province has a mandate to foster greater social cohesion, but progress on this is frustrated by high levels of inequality. Numerous studies hypothesise and analyse a relationship between social inequality and levels of education (Dias & Posel, 2007; Mitra, 2011; Vergolini, 2012). However they rarely provide a spatial perspective on this relationship.

Map 1 illustrates the stark spatial correlation between areas of the province where there is a high proportion of the population with tertiary education qualifications and where there is a concentration of high median household income, and vice versa. Tertiary qualifications are mapped as the proportion of the population in each sub-place who, according to the 2011 census, held either a bachelor’s degree, post graduate diploma, honours degree, higher degree masters or PhD. 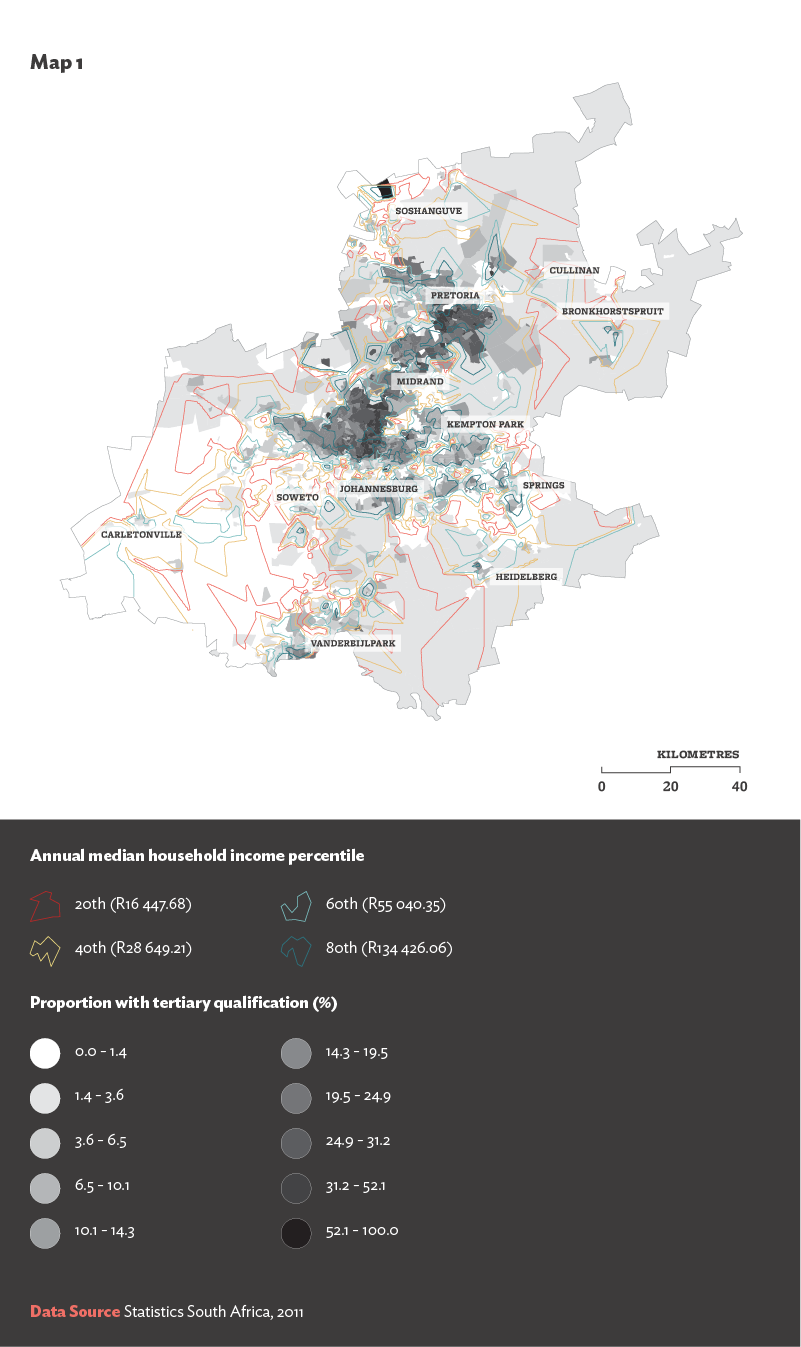 We provide a rather unusual representation of median household income through using ‘income lines’. This approach allows for a clearer spatial representation when income is overlaid with other socio-economic variables. Although unusual at first glance, the map should be viewed in the same way as one would view an elevation map. Whereas contour lines connect points with the same elevation above sea level, these ‘income lines’ connect points (sub-places) with the same median income level. We categorise the ‘income lines’ according to the 20th, 40th, 60th and 80th percentiles of income in the province. This approach clearly shows the spatial inequality in income across the province.

We represent the concentration of tertiary qualifications mainly because spatial differences are insignificant at the lower levels of education (No schooling, Gr 9 and Gr 12). We find that high proportions of populations (more than 10%) with no schooling occur in on 3.6% of sub-places. High proportions (more than 10%) with only grade 9 education occur in only 1.5% of sub-places. This suggests that basic education is highly accessible and residents have reasonable opportunities to continue their education to at least the middle of their secondary schooling. The concentrations of Grade 12 education as highest level of education is also relatively even. However, at higher education levels the disparities become clearer. The maps show that the spatial distribution of tertiary qualifications is highly unequal. 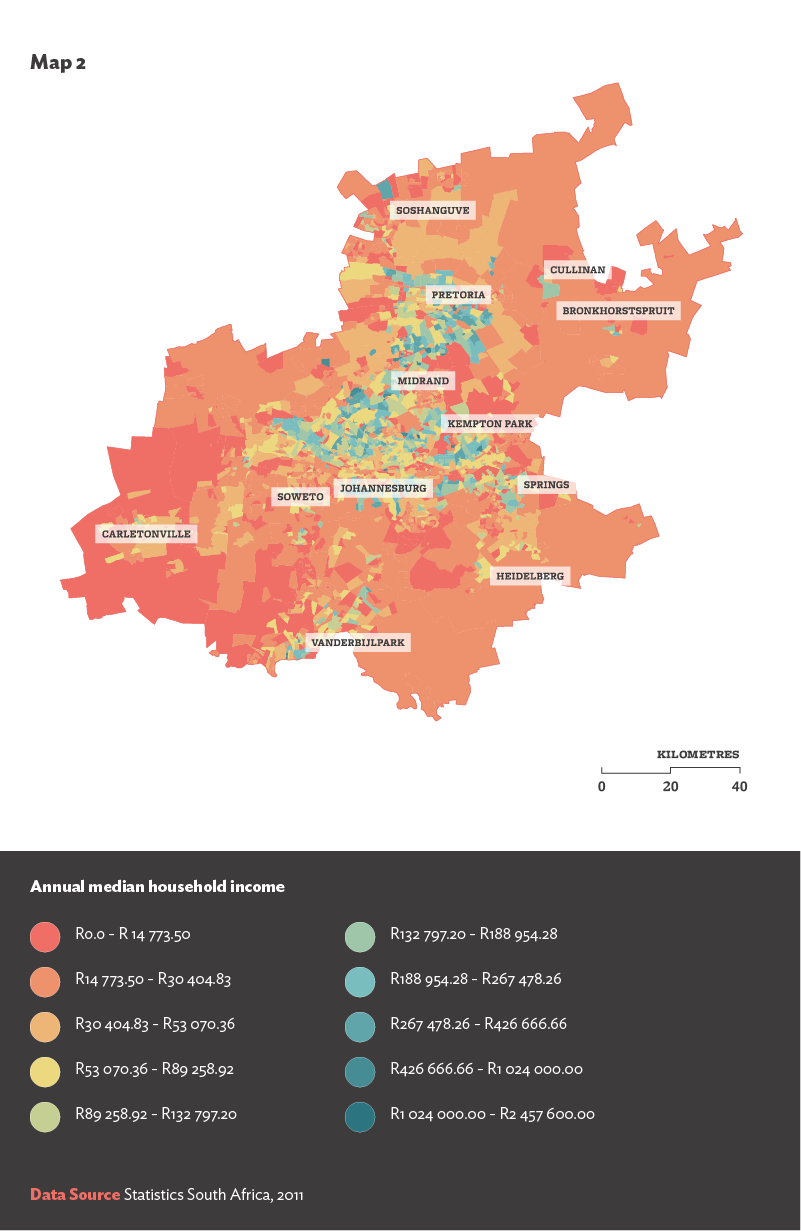 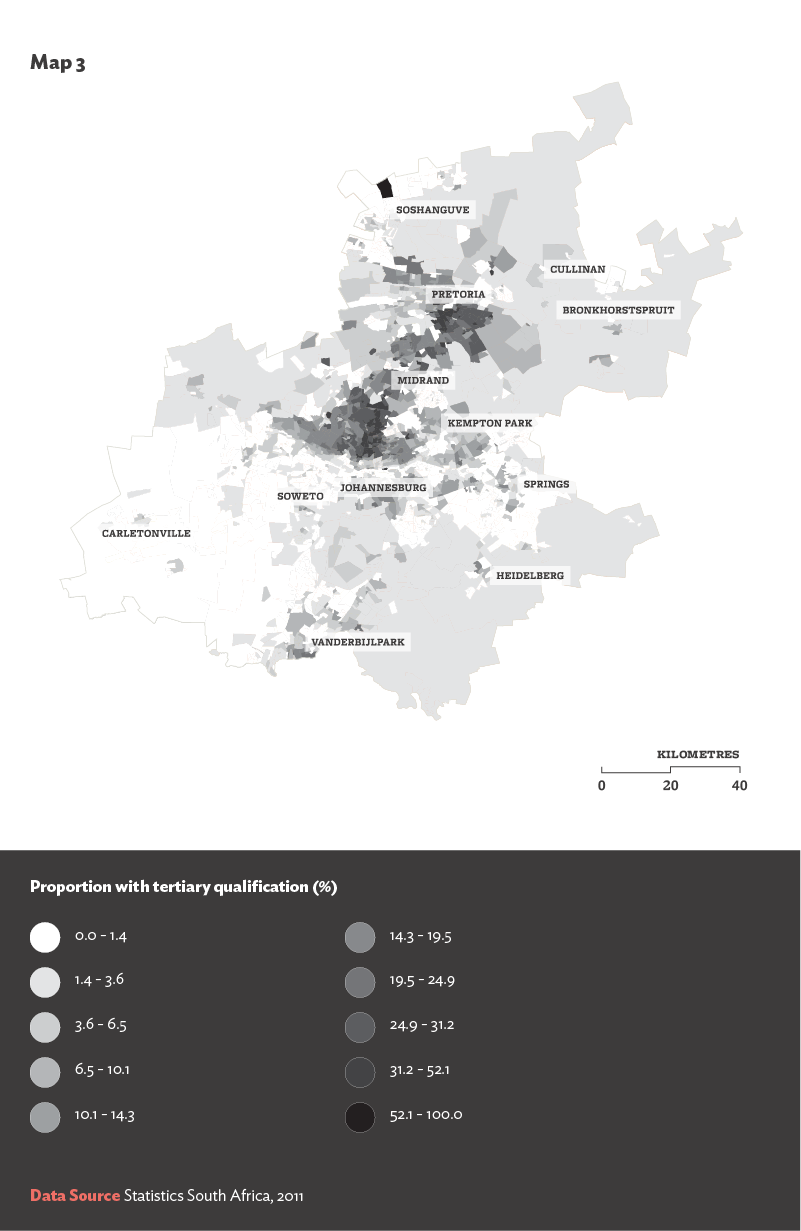 According to Dias & Posel (2007:1) “(f)ormal education was found to be a strong and significant predictor of income earned”. Our simultaneous representation of the distribution of tertiary education qualifications and median household income affirms this prediction, shows its spatial characteristics and emphasises the spatial clustering of relative wealth and deprivation in Gauteng. It is clear that a tertiary education qualification significantly boosts a household’s relative wealth and it therefore has important implications for a suitable response to social inequality in the province. The reasons for the spatial concentrations of higher qualifications could be attributed to a person’s ability to pass higher levels of education (although the average matric pass rate for the province, indicated in Vignette 28, is very high), but also the residential mobility gained by employment benefits or the processes of socio-economic succession. Ultimately, there is no doubt that unequal access to tertiary education (and subsequent unequal spatial distributions of qualifications) needs to be addressed if significant progress is to be made towards reduced social inequality and improved social cohesion.