The July map of the month is a language map indicating the most dominant language spoken by individuals in households across Gauteng. The Census 2011 Small Area Layer (SAL) was used to map the language most spoken by individuals using the P-06 language question asked by the StatsSA 2011 Census. This question asked respondents: ‘Which two languages does (name) speak most in this household’? The language table was generated according to the StatsSA SAL boundaries, derived by merging the Census enumerator area boundaries for South Africa. The language categories identified by Census 2011 include categories for ‘other’ and ‘not applicable’. These categories describe individuals in households that speak languages other than the listed options and children under the age of 2 that are considered to not use a spoken language.

This map is representative of the varied household language typologies of our city-region and reminds us of the cultural and spoken diversity of South Africa. IsiZulu is spoken most by individuals in households across Gauteng (19.48%) with SiSwati (1.11%) and Sign Language (0.43%) least used. The dominant languages appear to be largely clustered in areas to the north (Afrikaans), south (Sesotho), north-east (IsiNdebele) and west of Gauteng (IsiNdebele).There are striking differences in the clustered dominance of English in Johannesburg, comprising 19.80% of the total respondents in Johannesburg, and Afrikaans in Tshwane, comprising 18.36% of the total respondents in Tshwane. Apart from this very coarse grained clustering of dominant languages there is also a fine grained quilting of different languages at the SAL scale that reveals local-level diversity in residential areas across Gauteng (snapshots 1-5 in the map). An important consideration of this map is that this is not a map of respondent’s mother tongue and does not include the language most spoken at work. It is therefore only a measure of individuals’ household language use and how this varies across Gauteng. 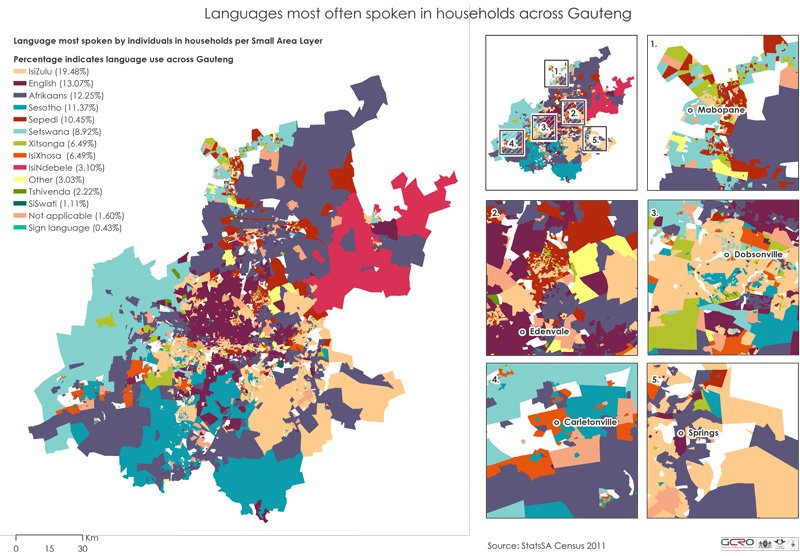