The January map of the month depicts socially isolated wards and gated communities in the Gauteng City-Region (GCR). For more information about this study, please see the GCRO’s January 2015 vignette on Social Isolation in the GCR. The map was created using GCRO’s 2013 Quality of Life (QoL) survey data to inform this particular Index of Social Isolation. The index was developed by selecting six survey questions that relate to a respondent's self, external or inflicted detachment from society. The questions were selected based on their ability to provide an understanding of social isolation and included responses that measure self-isolation, disconnection from current affairs and news, feeling of apathy, no community participation, and fear of their neighbourhood.

The index was built using the extreme outliers of the survey respondents. For example, only those respondents indicating that they do not want to go anywhere in response to the question ‘What is the main reason you have not made any trips or travelled in the last month?’ were considered and included in the results. This particular index therefore presents only on extreme views held by respondents. The list of six survey questions and selected responses are listed in the table below. All responses are valued equally in the index.

Interestingly, wards that indicate some degree of social isolation partially align with traditional segregation patterns of apartheid planning, where marginalised and underserviced areas show low social development scores. Wards that showed higher degrees of social isolation (mean scores above 1.24 out of 6) include suburbs, with no gated communities, such as Diepsloot, Theresa Park, Salvokop, KwaThema and Munsieville. However, wealthier suburbs, with many gated communities, such as Morningside, Sandton, Randburg and Northcliff also showed higher degrees of social isolation. 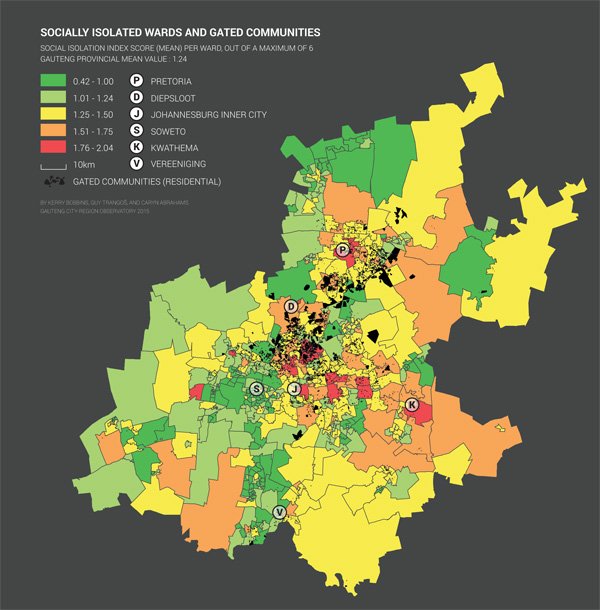