In August 2013, GCRO published a 3D map of population densities in Gauteng showing population concentrations in CBDs and townships. While informative, this approach presents a static picture of where people stay at night. A more dynamic picture emerged in the October 2014 map of trips to work. This month we offer a further look at where people in Gauteng reside and work by showing the daily shifts in concentrations of population by night and by day, as modelled by GeoTerraImage.

Figure 1 is a slide show of three maps. Map 1 shows the population at night, which largely reflects the residential patterns evident in the August 2013 density map. Map 2 shows where populations are concentrated during the day, including where people work and study. Map 3 shows a subset of the day time population, specifically the location of workers. Figure 2 shows the differences between night and day populations for many of the places named on the maps. 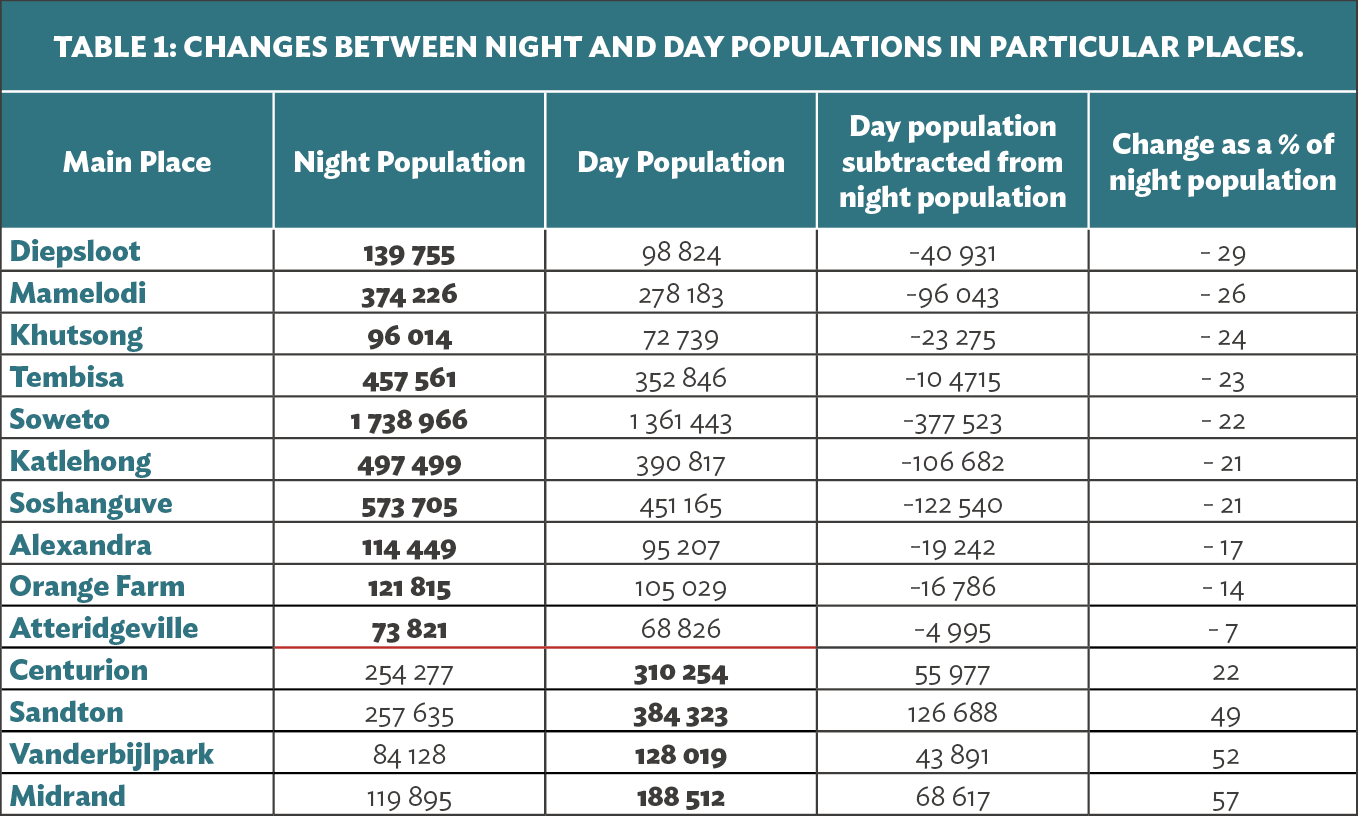 These figures cannot account for all movements of people, only net change between day and night. Nevertheless, in looking across these figures we can make five observations.

First, Map 1 (Figure 1) confirms density patterns that have been depicted elsewhere: night time populations are concentrated in CBDs and in townships such as Soshanguve, Mamelodi, Atteridgeville, Diepsloot, Tembisa, Alexandra, Soweto, Khutsong, Katlehong and Orange Farm. Middle class suburbs do have visible populations but they are spread across a larger area.

Second, Map 2 (Figure 1) shows that there are a number of concentrations that grow more pronounced during the day, such as Centurion, Midrand, Sandton, and Vanderbijlpark. During the day people also cluster in CBDs, areas adjacent to CBDs, and a number of other commercial, industrial, retail and educational nodes. Figure 2 shows, for example, that Midrand grows by 57% each day. It also shows that almost 130 000 people travel into Sandton each day. (Note that Figure 2 is not based on an analysis of all places in Gauteng, only selected examples).

Third, townships lose some of their populations during the day. Each morning, for example, there is a net outflow of 29% of Diepsloot’s night time population. In sheer numbers, Soweto has particularly dramatic flows, with almost 380 000 people leaving during the day.

Fifth, these representations are suggestive of a spatial mismatch between where people live and where people work (Budlender 2016). The legacy of apartheid has undeniably created a division between dormitory spaces and economic spaces, resulting in the need for enormous infrastructure to support flows of people each day (see July 2018 map on commutes through Mabopane station). The environmental costs of this daily movement are enormous, as are the personal costs. Sometimes transport infrastructure is not up to the task and workers who are commuting at irregular times cannot get to or from work. Meanwhile, unemployed people face prohibitive costs in travelling to look for work. That said, these images do not give us a sense of the variable scale of this mismatch or the ways in which some areas that might seem peripheral are in fact well connected (Pieterse 2018).