According the South African Constitution and the Municipal Systems Act (Act 32 of 2000), one of the objects of local government is to encourage local communities and community organisations to participate in development planning. In the spirit of participatory governance, local municipalities are legally obliged to encourage and create the necessary conditions for local communities to participate in the affairs of their municipality. One area in which communities can participate is in the preparation, implementation and review of Integrated Development Plans (IDP).

An IDP is a medium term strategic plan, revised annually, that gives an overall framework for development within a municipality. At the beginning of each electoral term, each municipality in South Africa is legally obliged to draft and adopt a single, inclusive strategic plan for development. This IDP links, integrates and co-ordinates various sectoral plans of the municipality, aligning with spatial development frameworks, the budget, departmental business plans and leadership performance plans to specify publicly where resources and capacity will be allocated for the implementation of development (RSA, 2000). It is important for communities and community organisations to be involved in the drafting of this plan in order to ensure that the municipality takes into account their needs and expectations in the final IDP document.

In order to assess the level of community participation in municipal affairs, the GCRO’s Quality of Life Survey V (2017/18) contained a question on respondents’ participation in the IDP process. The question asked: “Have you - or an organisation you belong to - participated in the IDP process in your community?” Respondents were able to provide one of three response options: (i) ‘Never heard of the IDP’; (ii) ‘Have heard of the IDP, but have not participated in it’; or (iii) ‘Yes, participated in it’. In order to observe how levels of participation varied across space, this Map of the Month maps these responses by ward. The results are shown in the figures and maps below.

Participation in the IDP 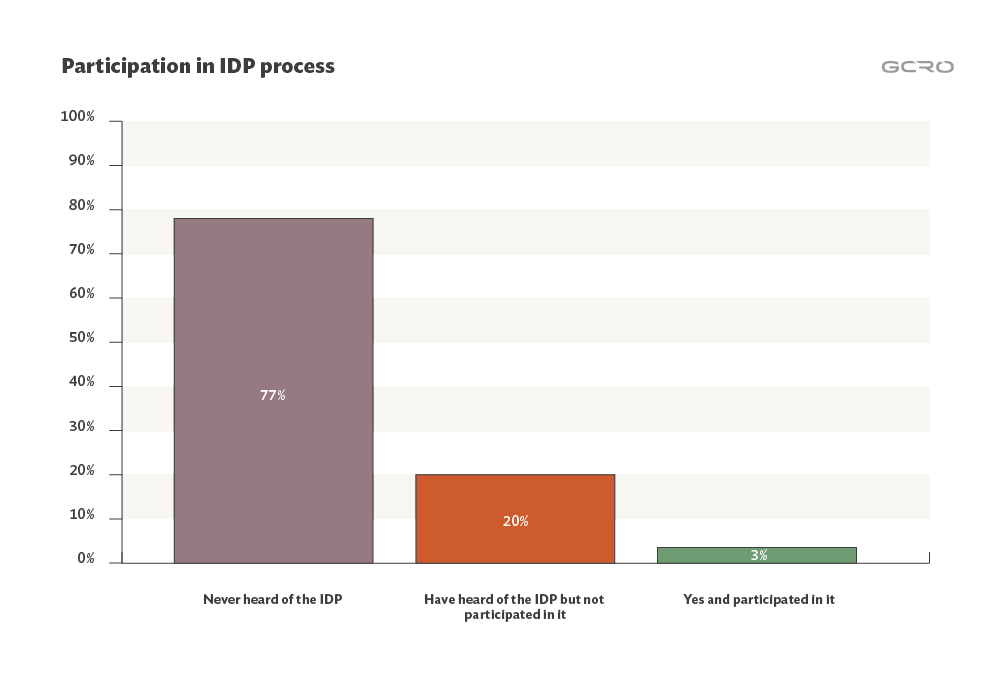 Had heard of the IDP but have not participated

Since the QoL data were available at ward level we decided to map these responses by ward in order to observe the overall spatial pattern across the province. Map 1 shows the proportion of respondents per ward that had heard of the IDP but had not participated in it. The map shows that the highest proportions were in wards mostly located at the centre of the province and in suburban areas. The highest proportions of non-participation can be seen in core urban areas of Johannesburg, Ekurhuleni and Tshwane, as indicated by the dark orange colour on the map. These include wards in areas such as Sandton, Centurion and Krugersdorp. With the exception of two wards, one near Akasia and the other near Soshanguwe, those wards on the periphery did not show high proportions of respondents who said they heard of, but did not participate in, the IDP. 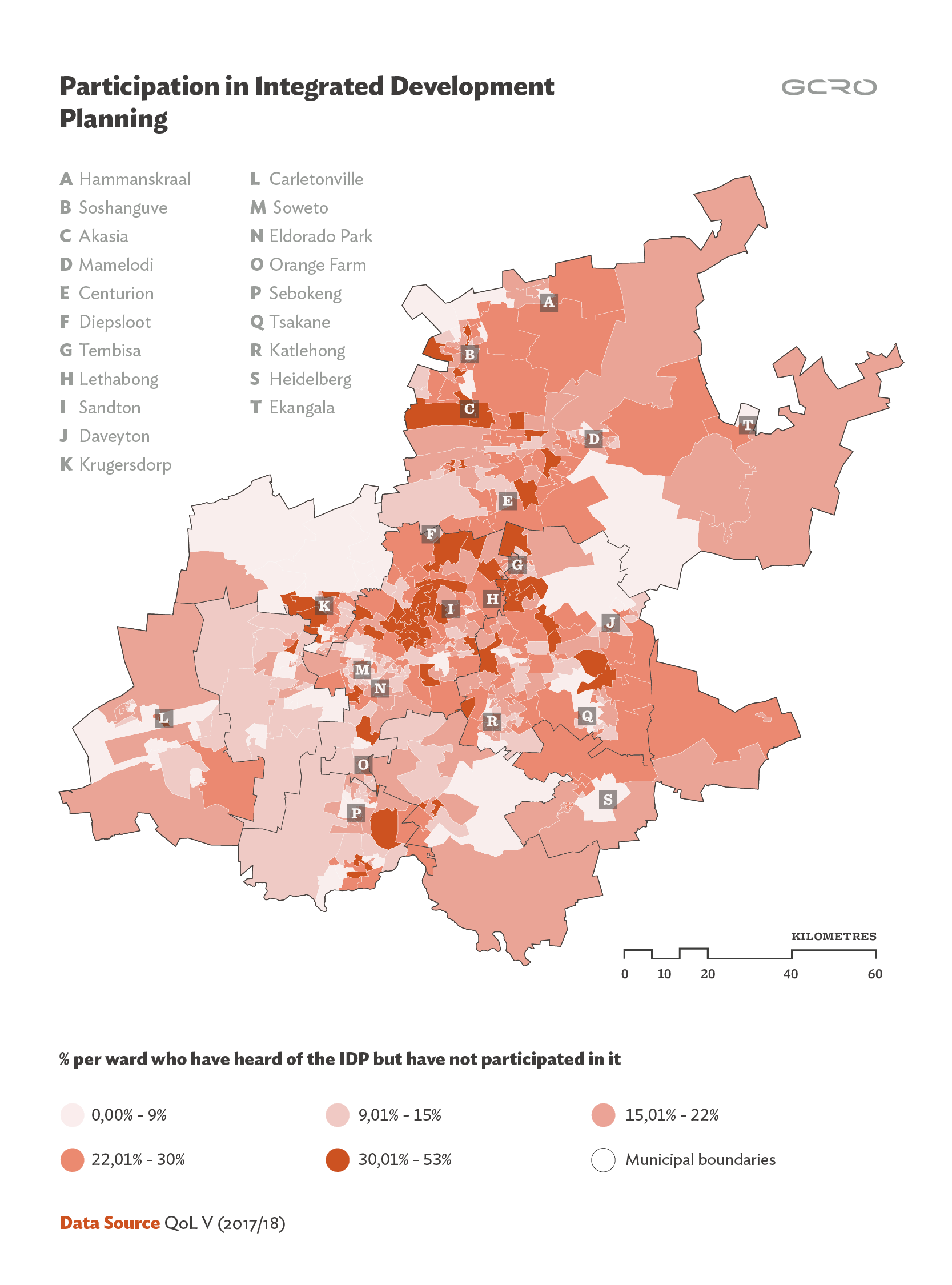 Participated in the IDP

In the second map, we show the percentage of respondents per ward that had heard about and participated in the IDP. This represents some 3% of the whole sample. Wards with high concentrations are shown in a dark green colour on the map and it is clear that most such wards are in peripheral, township and less formal areas such as Tembisa, Lethabong, Daveyton, Katlehong, Tsakane and Sebokeng. Most of the central core of the province is coloured very light green, indicating very low proportions of respondents who had heard of the IDP and participated. For example only in a few isolated wards in Soweto and Eldorado Park did we observe a high concentration of people that do participate. In many of the wards on the periphery, less than 1% of the respondents said that they had participated in the IDP. An unusual ward is that west of Akasia. This had both high proportions of those who had heard of the IDP but did not participate, and those who had participated. 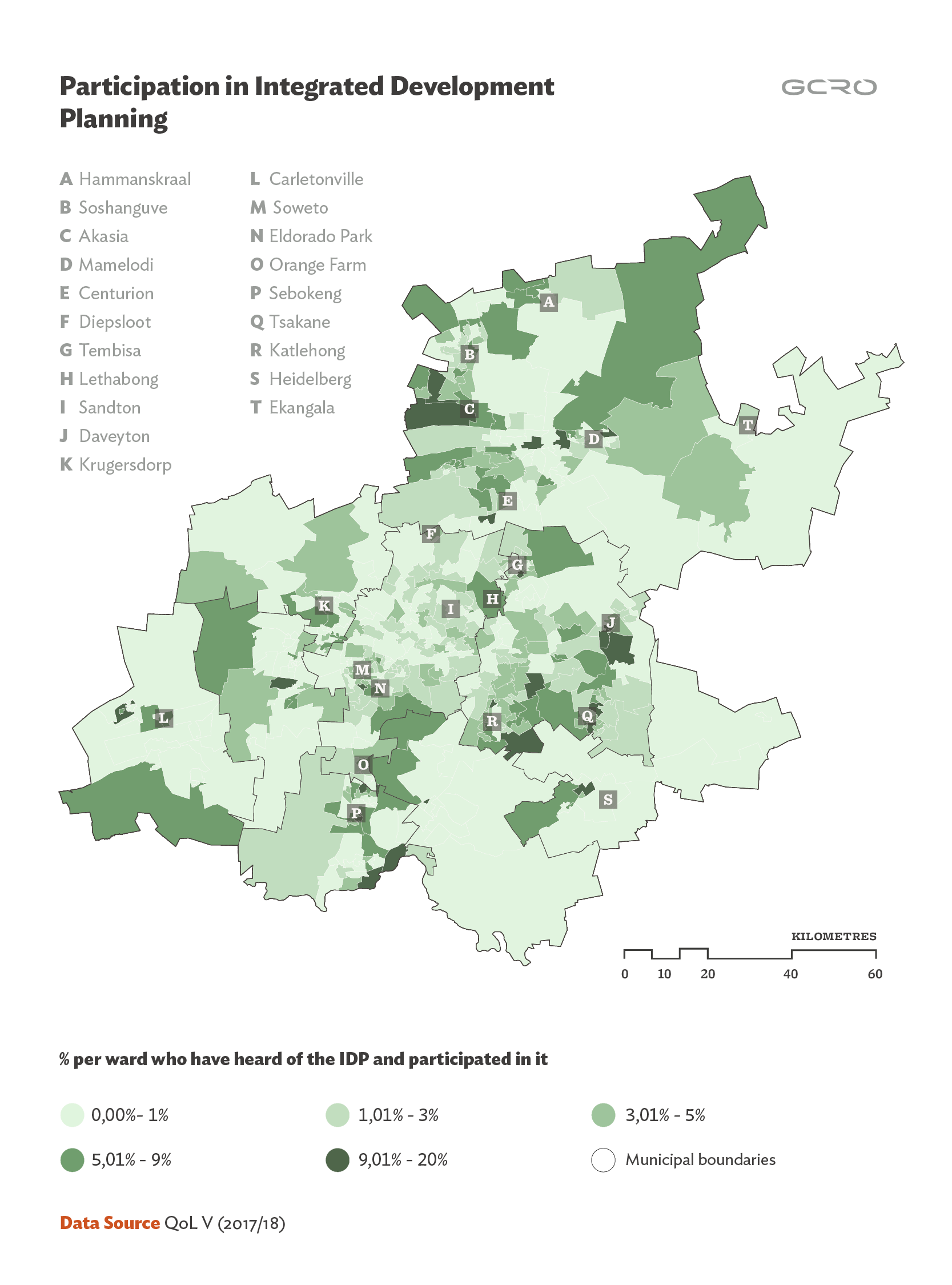 Never heard of the IDP

The third map shows percent per ward of those who had never heard of the IDP (some 77% on average). Again, we observe the highest proportions in wards in townships and peripheral areas, mostly in the west and southern parts of the province. These wards are coloured dark purple on the map, with up to 88-100% of respondents who had not heard of the IDP. This map contrasts sharply with the first where wards with higher proportions knowing about the IDP seem to concentrate at the centre of the province. 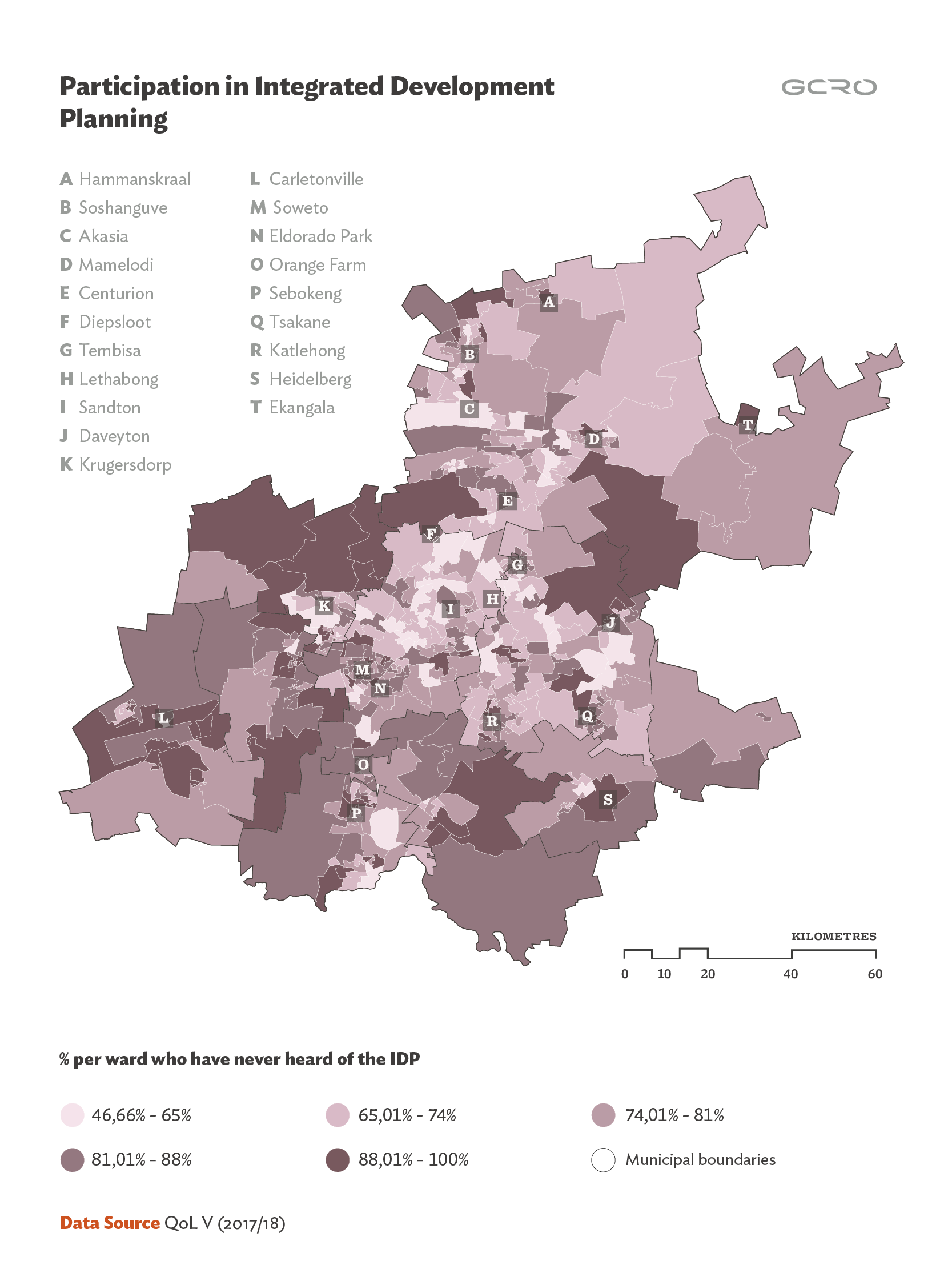 Satisfaction with the IDP 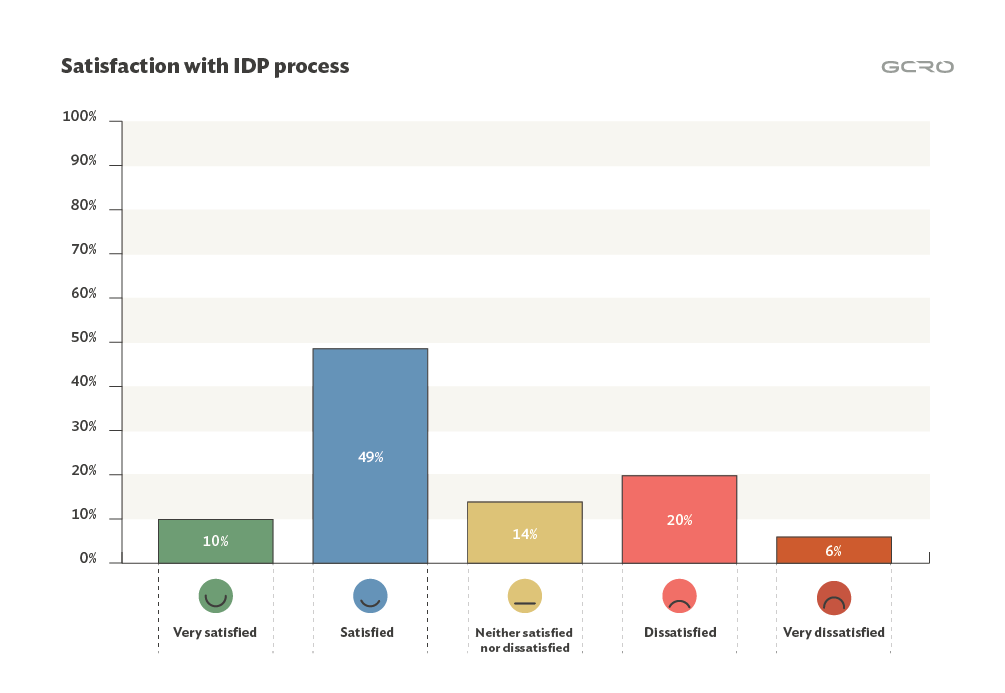 Participation by race and income group

We also decided to analyse how participation varied across race groups. Interestingly, for each racial group, over 60% of respondents said they had never heard of the IDP. Whites were more likely to have heard of the IDP process (29%) compared to Africans (18%). This corroborates what we saw in the Map 3. However, participation is similar across the different racial groups (3%), save for Indian/Asian (2%). 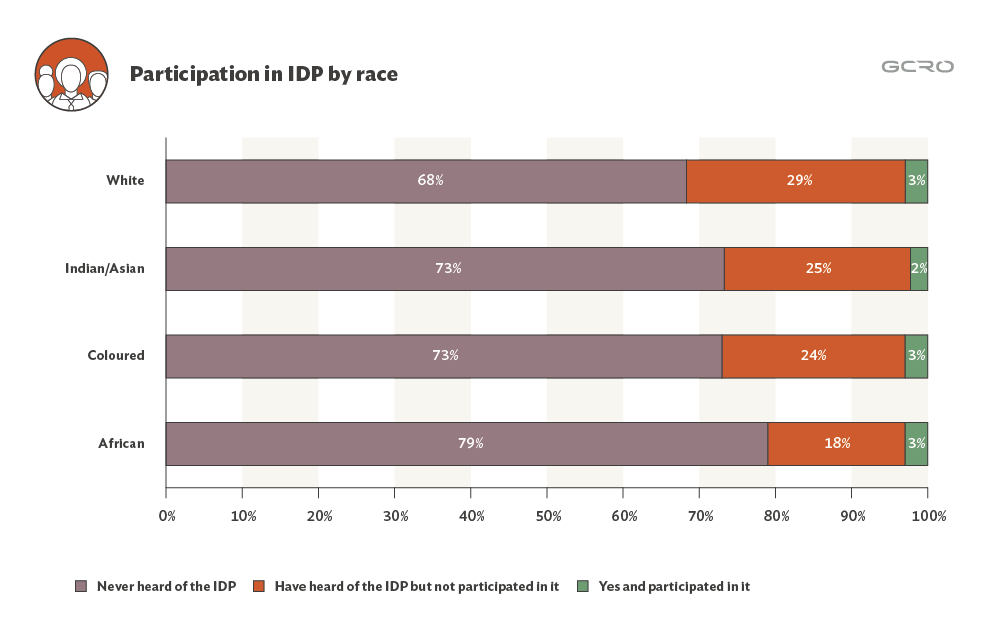 Given the contrasts we observed between the core and periphery, township and suburbs, we also assessed how participation in the IDP process varied across income groups. In general, awareness of the IDP increases with higher income. We found that respondents in the second highest income category (R25 601-R51 200) were more likely to have heard of the IDP (35%) and more likely to have participated (5%). In the lowest category (0-R1 600), a very large proportion (83%) said they had never heard of the IDP, while a small fraction (3%) said they participated in it. 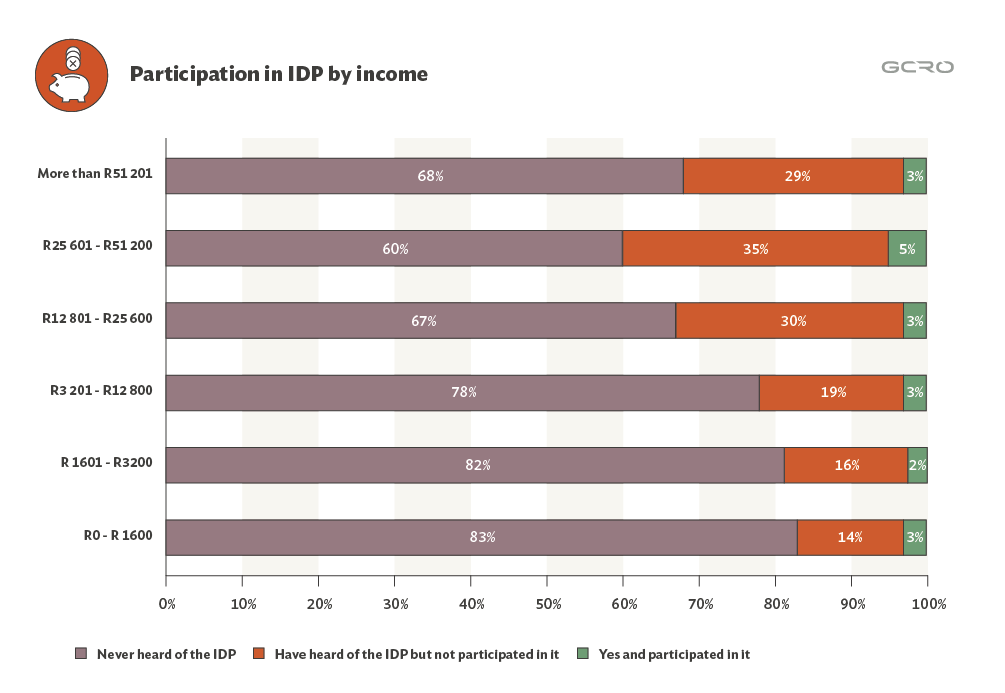