Over the past few decades, disaster occurrences have increased around the world (UNISDR, 2015). This increase has been a result of a range of factors including climatic changes, population growth and urban development. Increased disaster risk seems to be manifesting in South Africa, as evidenced by the fact that the Western, Eastern and Northern Cape are currently battling the worst drought in over a century. Although Gauteng is being spared this particular disaster at this point, it did face a very severe drought in 2016, and parts of the province regularly confront flooding from intense thunderstorms. It is therefore important to consider more systematically disaster risk and vulnerability in the province.

The Gauteng Department of Agriculture and Rural Development (GDARD) is currently exploring how climate change is likely to affect the Gauteng City-Region (GCR). As part of this wider and ongoing study into where and how risks may arise from climate change, this March 2018 Map of the Month has been developed collaboratively between GCRO and GDARD to map household vulnerability to disasters.

Gauteng has already recorded temperature increases and changes in rainfall patterns over the past few decades (Engelbrecht et al. 2015). These changes, in combination with rapid urbanisation, population growth and poorly planned and designed settlements, pose significant disaster risk for the province.

It is important to note that the mere occurrence of a hazard, such as a drought or flood, does not automatically lead to a disaster. A disaster only arises when a system or community is exposed to and vulnerable to that hazard. Vulnerability, what the United Nations Office for Disaster Risk Reduction (UNISDR) calls the ‘human dimension of disasters’, is in essence the susceptibility of individuals, households and communities to be harmed when hazards do occur. The degree of vulnerability is shaped by a range of social, economic and environmental factors.

Although the urban poor, and particularly those living in informal settlements, are likely to be the worst affected by disasters, vulnerability to disasters is affected by more than just low income. Factors such as access to basic services, transport, communication, social capital and education are also important in influencing vulnerability. There is a growing emphasis on the role of minor everyday risks that accumulate over time to increase vulnerability to hazards such as floods and drought. This Map of the Month explores one way of mapping vulnerability across Gauteng using data from GCRO’s fourth Quality of Life (QoL) survey conducted in 2015/16.

The QoL IV (2015/16) survey was used to construct a Vulnerability Index that takes into account the range of everyday factors that shape individual and household vulnerability. The Index incorporates 35 variables spanning a range of dimensions including poverty, health, dependency, access to housing and services, communication, mobility, and coping capacity. The Index draws on both objective and subjective measures in order to obtain an overall sense of vulnerability to disasters. See below for a table of dimensions and variables used to construct the Index.

An Empirical Kriging Bayesian interpolation model was used to translate the individual vulnerability scores into a smooth surface of vulnerability across Gauteng. This GIS interpolation method uses known data locations to predict vulnerability for areas not included in the QoL IV sample and does this by accounting for the spatial distribution as well as the spatial relationship between respondents. This mapping method allows us to map changes in vulnerability at an individual respondent level and show how this changes in space over Gauteng at a finer scale than ward level analysis would allow. 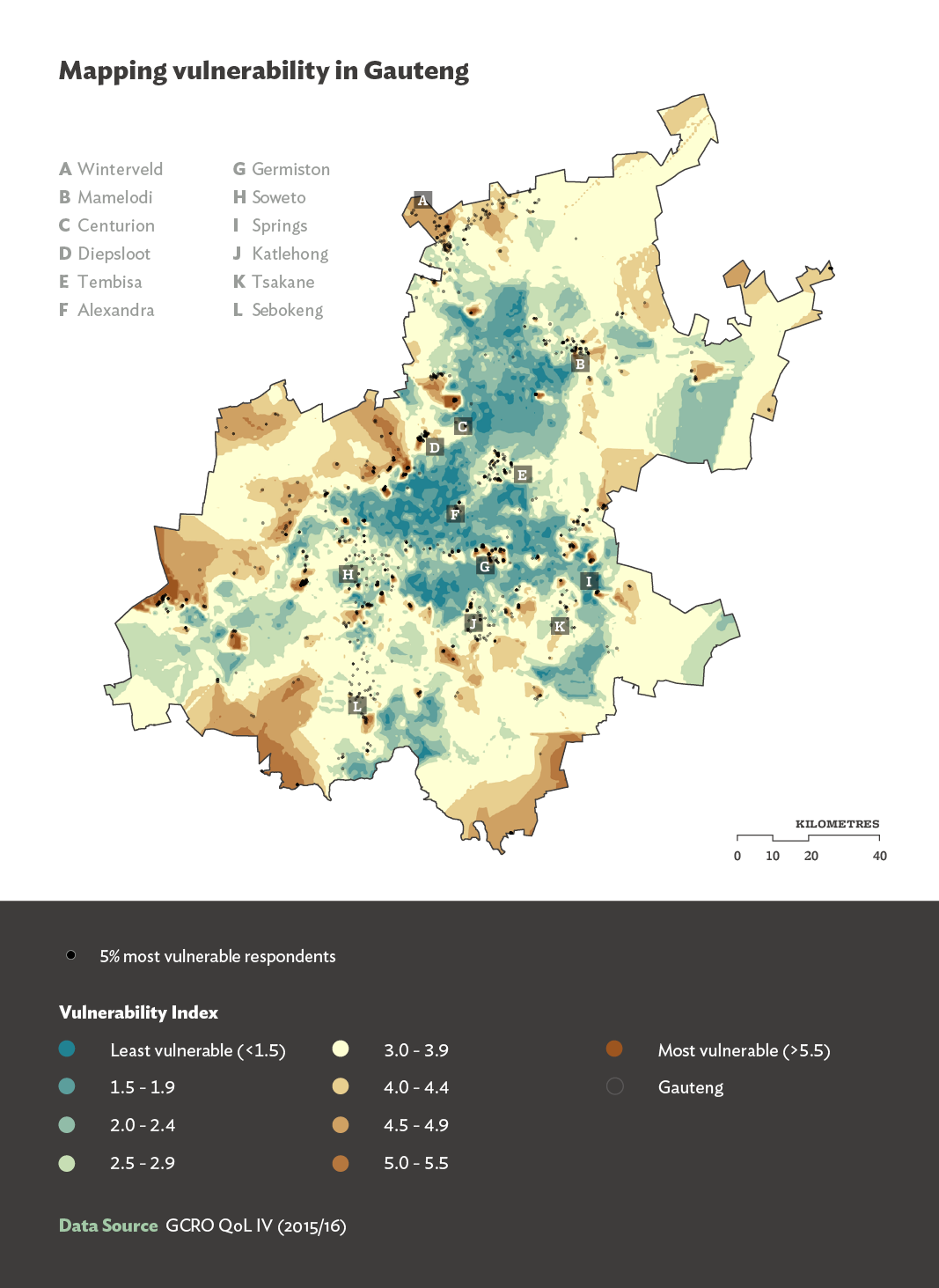 On our map relatively high concentrations of vulnerability can be seen in areas such as Soweto, Diepsloot, Mamelodi, Sebokeng, Tembisa, Tsakane, Germiston and Winterveld. By contrast, areas such as Centurion and Sandton are home to the least vulnerable respondents.

It needs to be noted that in some more densely populated areas of Gauteng there is a mix of many highly vulnerable people living side-by-side with less vulnerable neighbours. For example, areas such as Tembisa and Diepsloot have large numbers of vulnerable people, but also many people who are less vulnerable. Because of this mix, the average Vulnerability Index scores for theseareas do not reflect their high concentrations of very vulnerable people, and these areas do not always appear as a darker brown colour on the map. Other areas may have more consistently vulnerable people and a higher average score, and therefore appear as vulnerability hotspots on the map, even though they may not have such large clusters of vulnerable people in total as somewhere like Tembisa. Examples include Lindelani Village, Rietfontein, Stinkwater and the Winterveld. It is also worth noting that some areas might have relatively low average Vulnerability Index scores, but be highly exposed to disaster risk because they are prone to hazards like floods. Diepsloot is a good example. Exposure to risk is not factored into this mapping. These distinctions are important when government decides where to focus its efforts in responding to vulnerability challenges.

While mapping vulnerability at an aggregated level is useful for government planning, disasters are experienced at the individual scale. Hence, assessing averages and scores has the potential to dissociate vulnerability from the person who is vulnerable. Put differently, it can dehumanise the issue. The following comparison provides a glimpse into the actual lives of two respondents from the QoL IV, one among the least vulnerable in the province (with a score of 0/10), the other among the most vulnerable (with a score of 7.4/10). 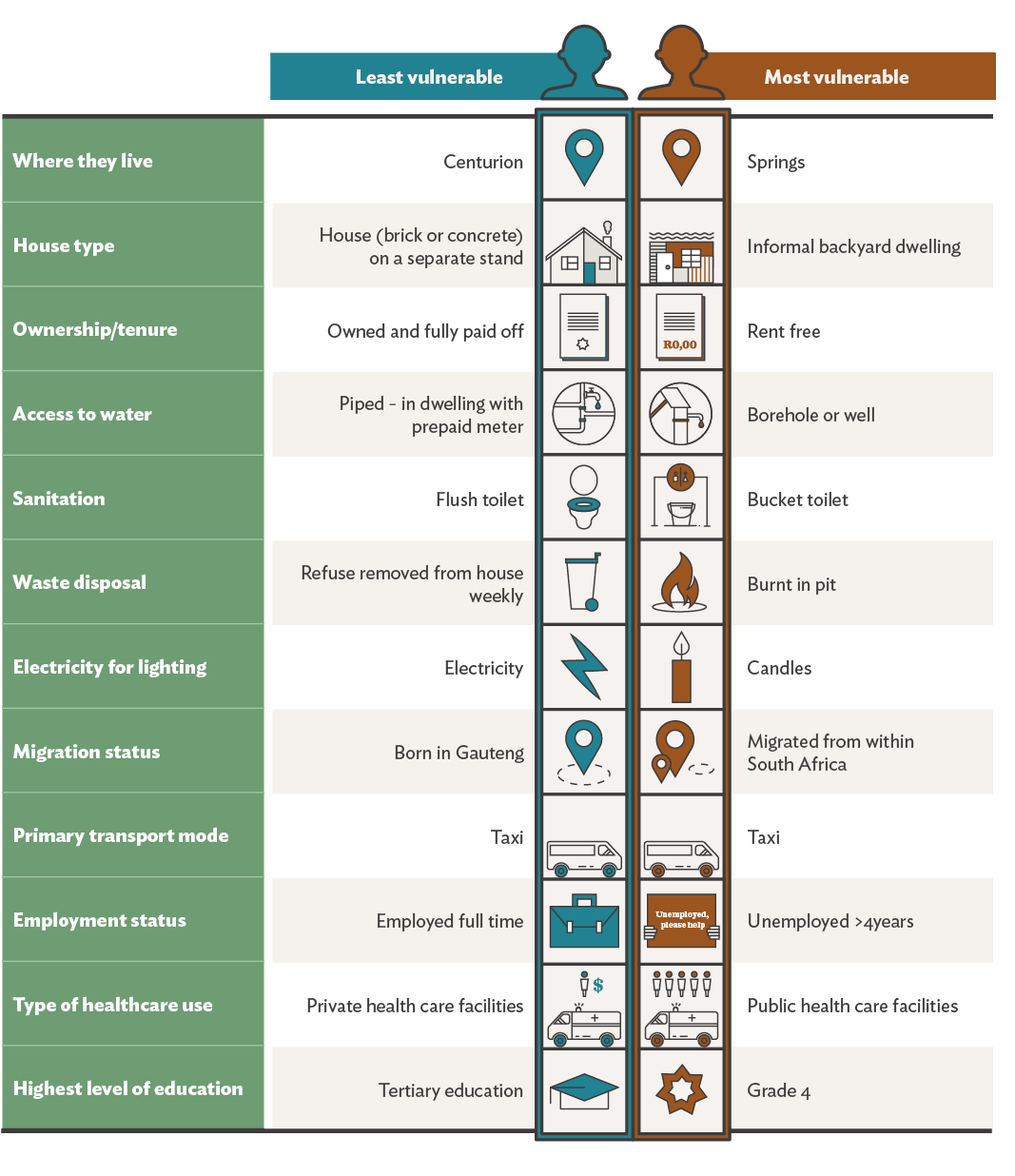 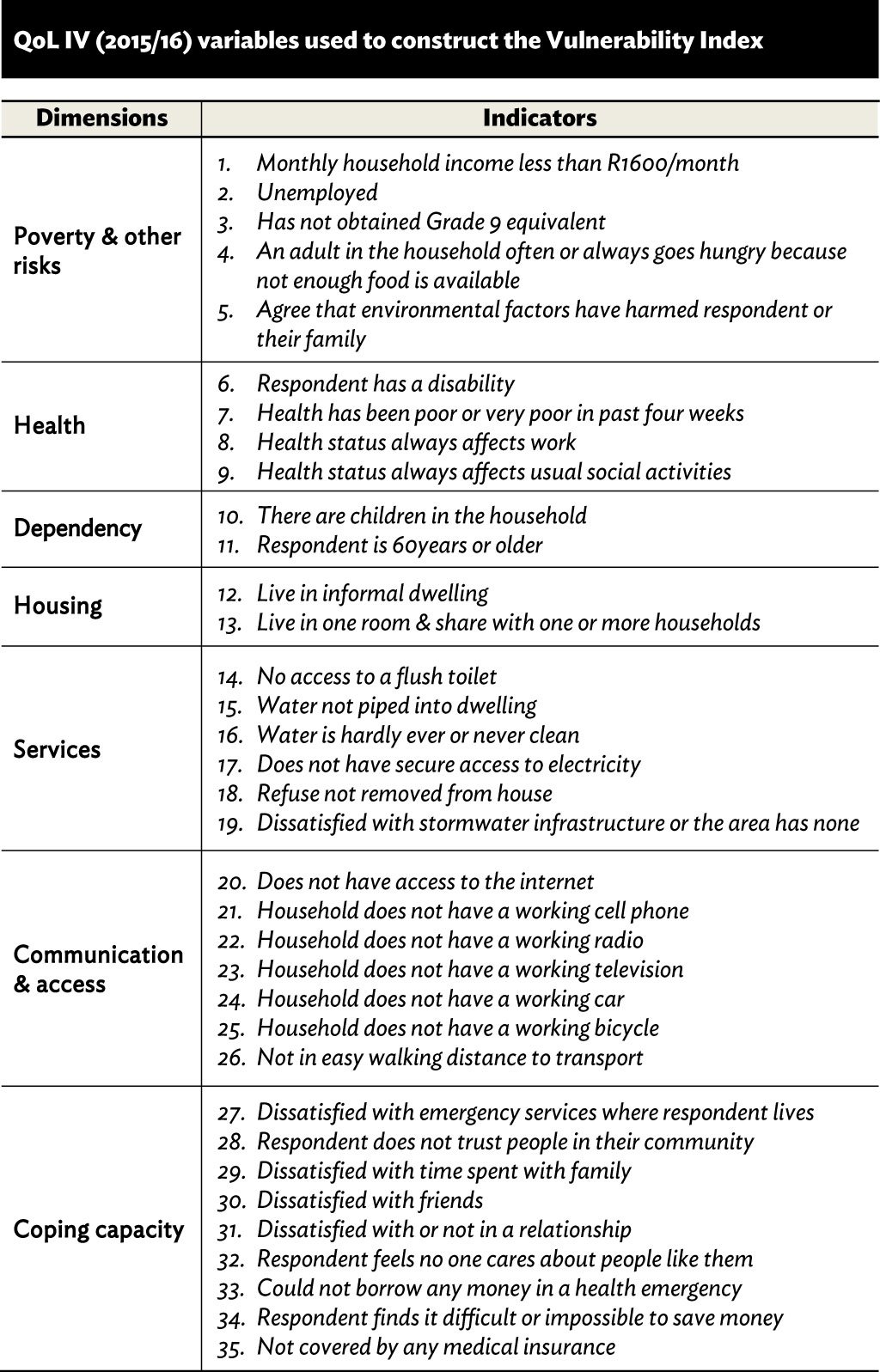 * Each indicator is equally weighted