A key issue in the literature on urban space economy is the extent to which geographic separation between places of residence and areas where economic activity concentrates impacts work-seekers’ ability to find jobs. Proponents of the so-called ‘spatial mismatch hypothesis’ point to evidence that being far from work opportunities increases unemployment.

Others argue that the lines of causality are not so clear. For example a recent paper by Owen Crankshaw 2 assembles evidence from Cape Town showing that the ability of workers and work-seekers to develop workplace-based social networks has a significant effect on their capacity to access the job market. Many might live in remote areas, but this is less significant than social connections in determining employment or unemployment. This is an important debate in the Gauteng City-Region (GCR), with its high unemployment rates and fragmented spatial form resulting from apartheid.

This month’s map of the month is derived from the 2013 Quality of Life (QoL) survey which asked respondents a series of employment related questions, and also to indicate the purpose of their most frequent trip – i.e. to go to work, to look for work, to go shopping, etc. – as well as the destination of that trip. Out of the total QoL survey sample of 27 490 respondents, 29.6% were unemployed and looking for work. Of these, 1 145 (14.1%) did not travel anywhere in the month prior to being surveyed. Of those who did make a trip 21.6% (1 511 in all, and comprising 5.5% of the total sample) travelled most frequently to “look for work” (By comparison 43.1% of work-seekers who made a trip did so most frequently to shop; 3.8% to go to a place of entertainment; 3.2% to a place of study; and so on). The map plots these “look for work” journeys. It uses the geographical location of households at which individual interviews were conducted as starting points, and the destination subplaces (suburbs) as end points. The size of destination points (indicated in red) has been scaled with respect to the number of trips to a given destination – the bigger the dot the higher the frequency of trips to the destination.

The data and map tell us a number of things. Only 5.5% of our sample making a trip to “look for work” may seem low. But extrapolated to the total Gauteng population of those aged 15-64 in 2013 – 9 113 314 according to StatsSA’s mid-year population estimates – it means that over half a million people are making regular trips to “look for work”. Of course, many of those who are unemployed and looking for work but who don’t make any regular trips, or who are travelling more frequently to shop or study or for other purposes, may very well be trying to access jobs through social connections. However for many others social networks are clearly not sufficient to access jobs, and there is a need to get up in the morning and travel to find work. Here the spatial form of the GCR matters.

The reverse was true for more modern commercial centres with large office complexes and without typical grid-street layouts. For example, Centurion attracted just 0,8% of “look for work” trips but 3,1% of all trips “to work”. The core areas of Sandton (Sandown, Sandhurst and Morningside) drew 0,1% versus 0,7%.

This may say something about the perceived accessibility of jobs in certain locations with particular urban forms, regardless of how many jobs they actually hold. Further research on this would deepen our understanding of spatial mismatch effects on unemployment in the GCR. 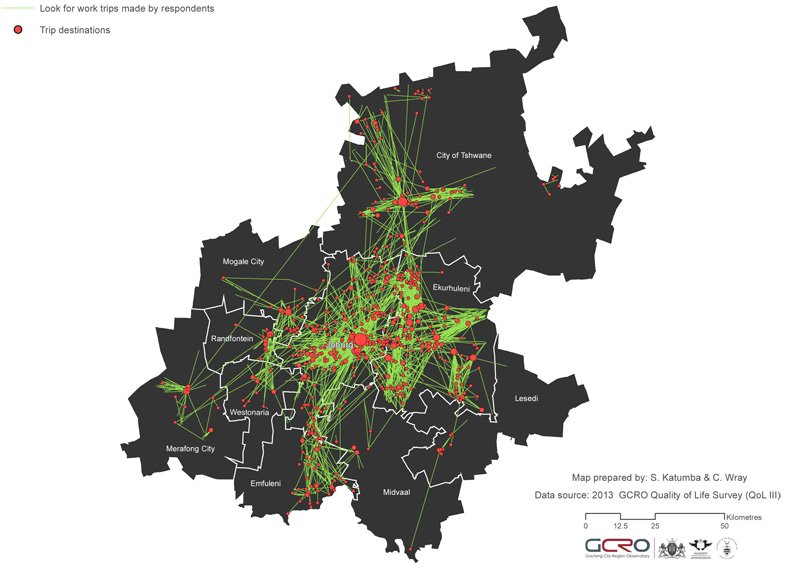