How do informal and formal businesses in Gauteng compare to one another with respect to their spatial distribution, and the spatial distribution of their suppliers? The GCRO’s 2015 Quality of Life survey (QoL IV) is able to provide some answers based on a set of questions asked of all respondents who identified themselves as business owners. The survey found that 8% of survey respondents owned a business, of whom 65% operated in the informal sector and 35% in the formal sector. These respondents were asked to indicate where they conducted their business, selecting from a list of suburb place names. We have mapped the location of these businesses in Map 1 below, where each dot is scaled to represent the number of businesses of each type in each place. We can see that townships such as Mamelodi, Soweto, Tembisa and Orange Farm have far more informal businesses than formal, while other areas, such as those north of Johannesburg’s CBD, are dominated by formal businesses. 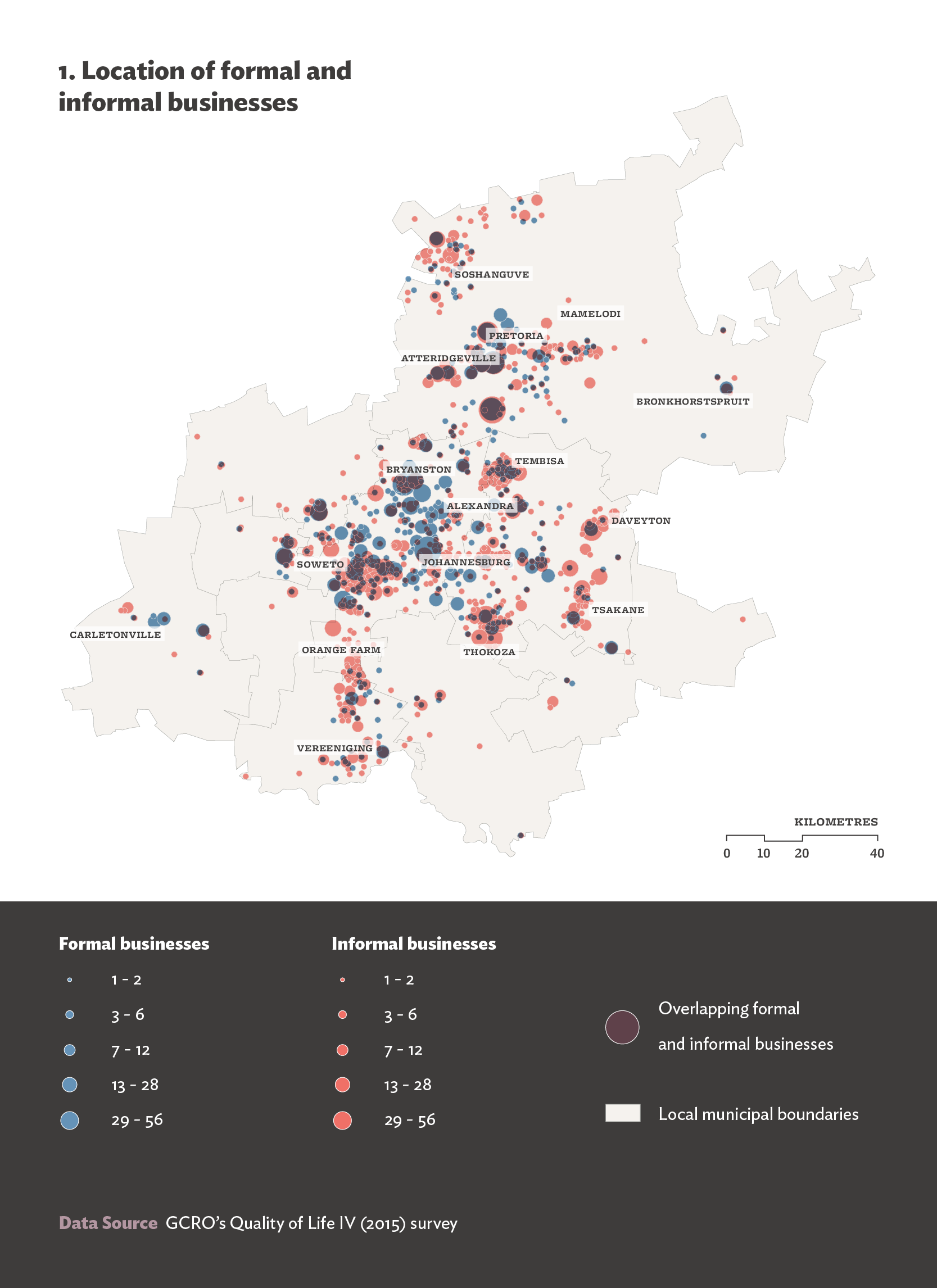 QoL IV also asked business owners to think of the main input into their business and then identify where they sourced that from. The maps below illustrate where business owners in the informal and formal sectors buy supplies for their businesses. Map 2 shows that suppliers to formal businesses are concentrated in downtown areas and also in supply hubs around the city region. Map 3 shows that there are a large number of suppliers to informal businesses in townships, and also central business districts. 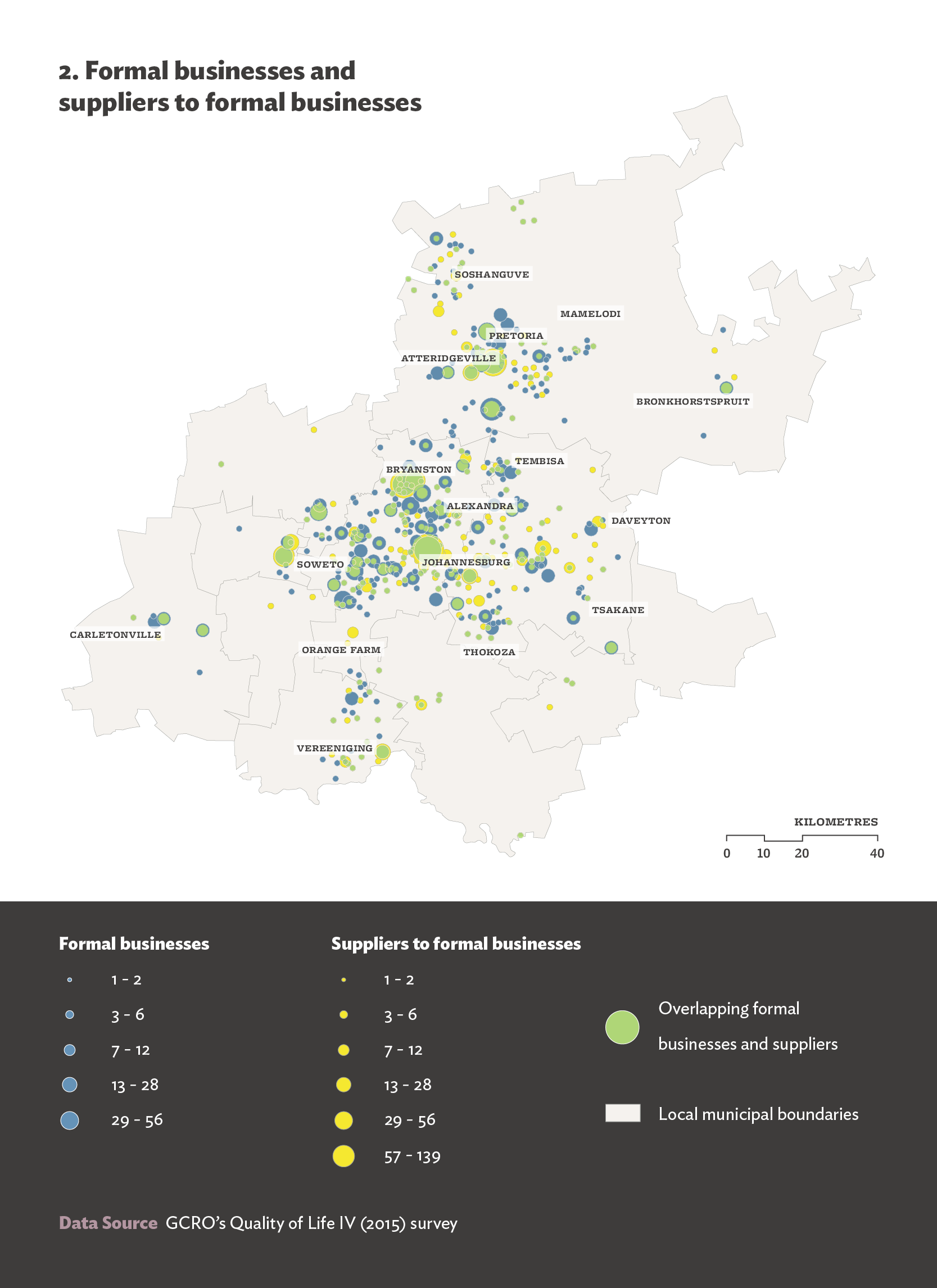 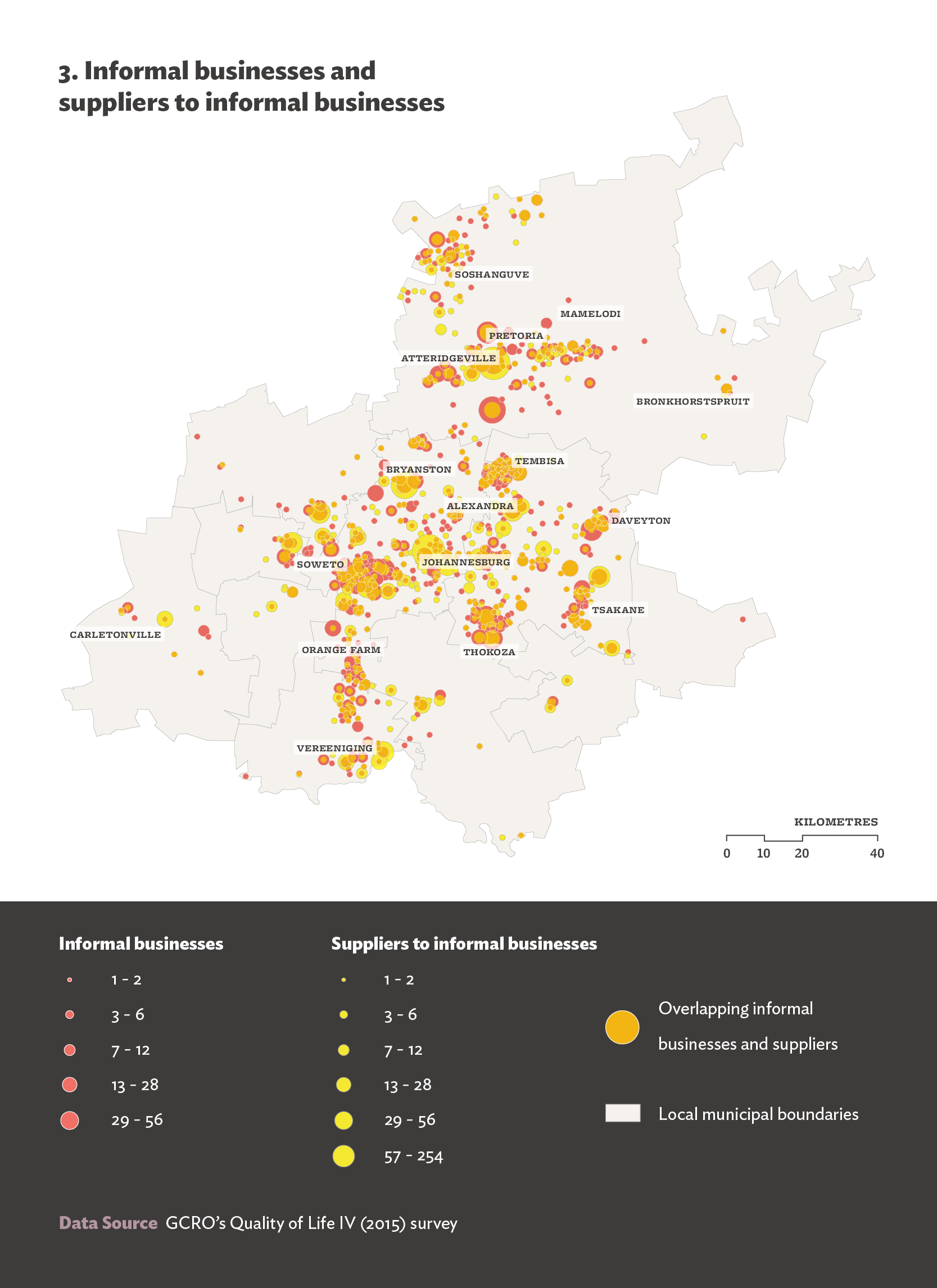 To examine the location of suppliers to businesses in townships in more detail, the graphs below indicate the total number of businesses of each type in selected townships, broken down by whether or not they source their supplies from within that township. On average, 36% of formal businesses in townships buy from suppliers in the same township as that within which they are located, while a significantly larger percentage of informal businesses – 56% – source their supplies locally. 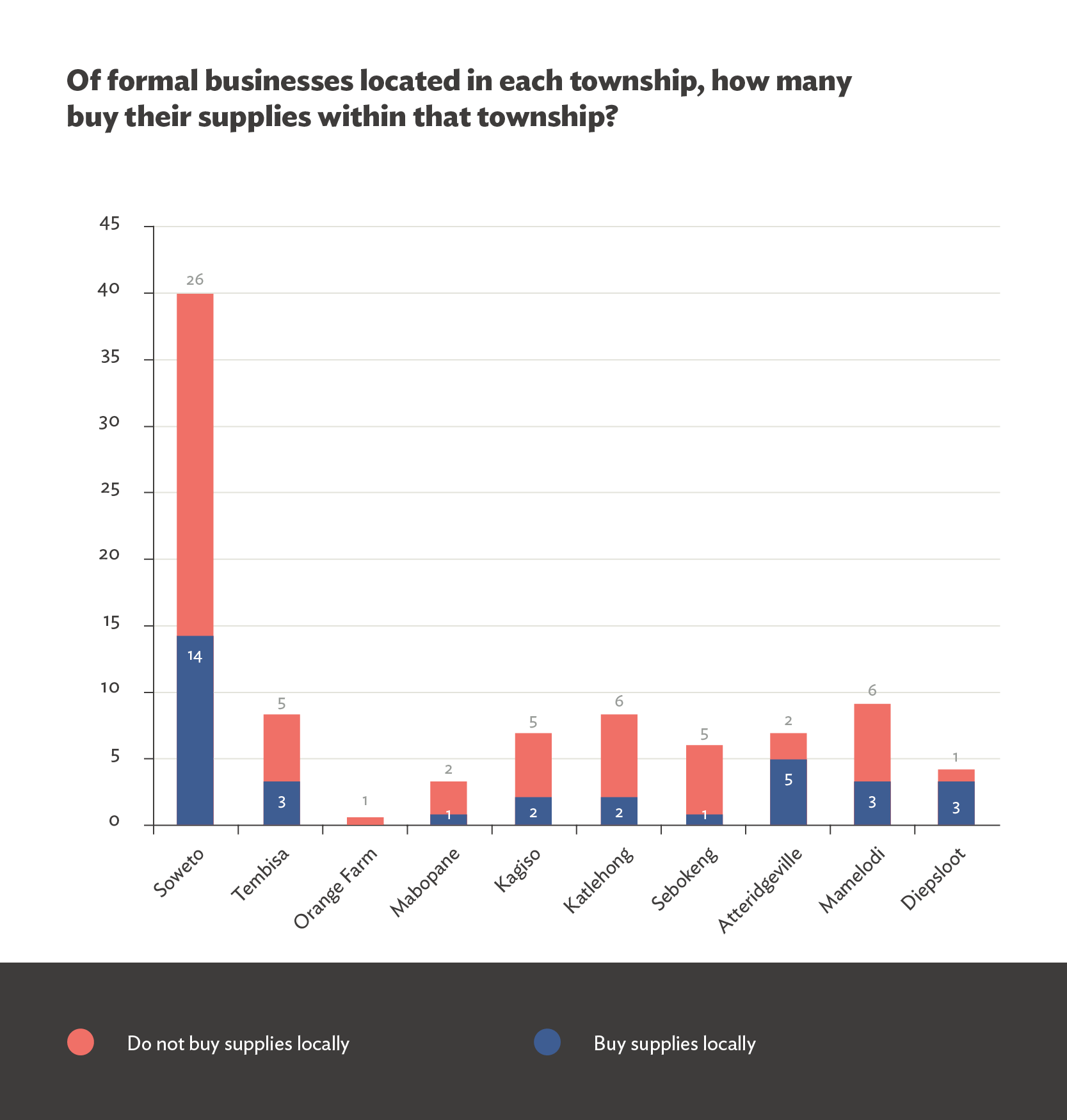 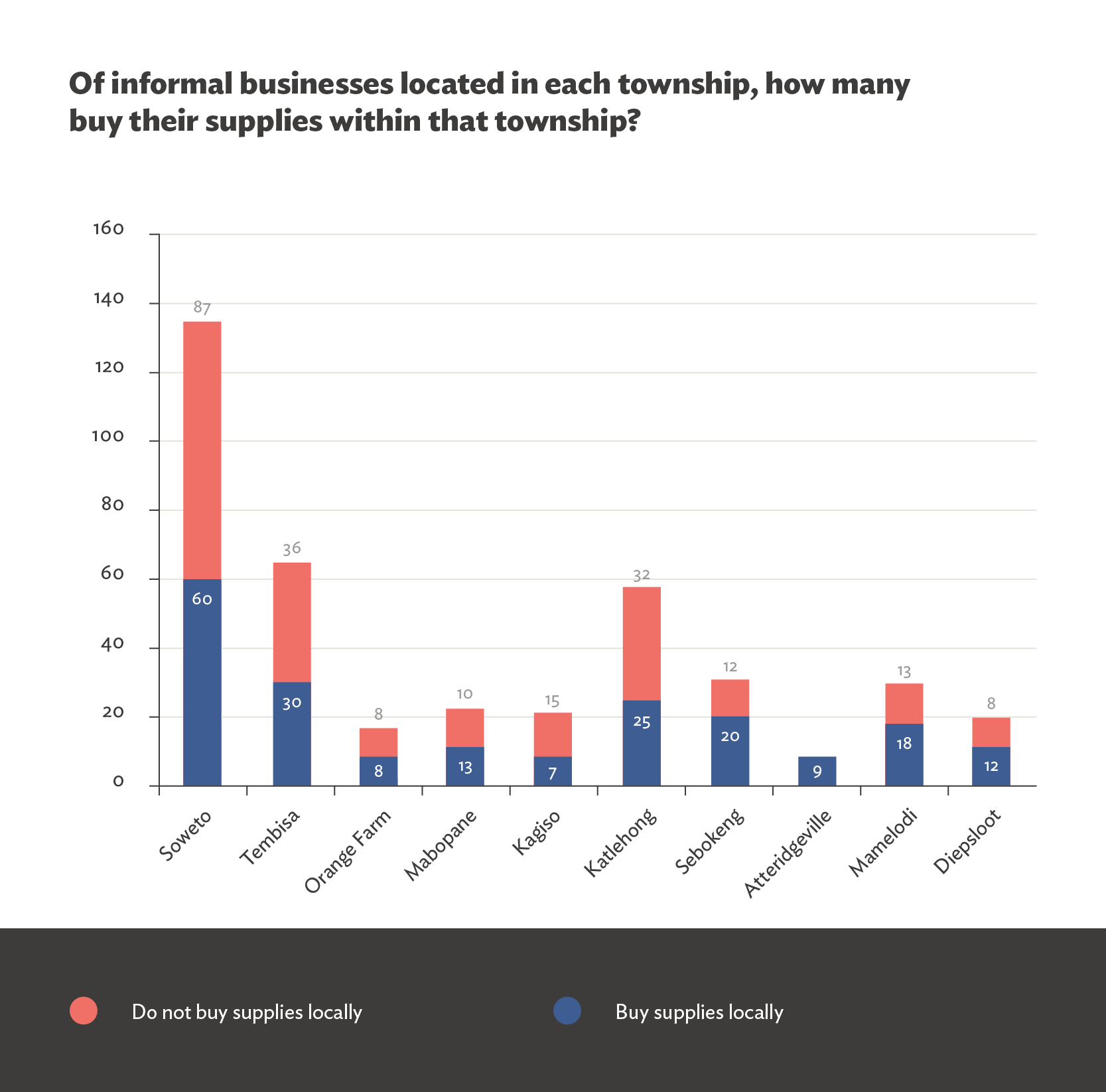