Although Gauteng is the most urbanised province in South Africa, ecological systems play an important role within the city-region. Vegetated spaces provide a range of services both within and beyond the urban extent. This Map of the Month extends GCRO’s green infrastructure mapping work by displaying the distribution of green vegetation across Gauteng. The maps have been generated by applying a technique known as a Normalized Difference Vegetation Index (NDVI)* to satellite imagery for the province. Green, on the one end of the scale, indicates green vegetation and high photosynthetic activity. Red, on the other end of the scale, corresponds to open areas of rock, sand, water bodies and limited vegetation. It is important not to conclude that green is good and red is bad. Most of Gauteng is part of the grassland biome, dominated by grass species, bulbous plants and smaller trees or bushes. These are not green in the same way as a forest would be, and do not show up as green on the map, but they are very important in their own right. Grassland areas show as medium to low NDVI values, dominating the map outside of the urban core of Gauteng.

The grey shaded areas on the map represent impervious surfaces such as roads, parking lots, driveways, pavements, rooftops, patios and other built up surfaces. Impervious surfaces are common in urban areas where land has been transformed and hard surfaces have replaced natural areas.

The highest NDVI values in Gauteng are concentrated in the suburban areas where green leafy trees, planted gardens and lawns are common. Irrigated agriculture also shows up with high NDVI values. As with impervious surfaces relatively devoid of vegetation, these areas also represent a transformation of the original natural landscape. The plants here – whether part of the ‘urban forest’ or irrigated fields – often require more water than those natural to the city-region. While these plants may not be natural to the area, it needs to be recognised that they provide important services, such as temperature regulation, flood control, and air and water purification, thus materially improving the quality of urban spaces.

This map, and zoomed in portions of it, clearly reveal the spatial inequality in distribution of healthy green vegetation. Alexandra, Soweto and Diepsloot are some key examples of areas with very low NDVI values, indicating the predominance of bare soil, hard surfaces, higher urban densities and virtually no vegetation. These lower income areas with a fair amount of impervious surfaces face an increased risk of floods. In contrast, well established, often wealthier, suburbs (e.g. Sandton and Vanderbijlpark) have high NDVI values indicating significant tree coverage in gardens and well maintained parks. 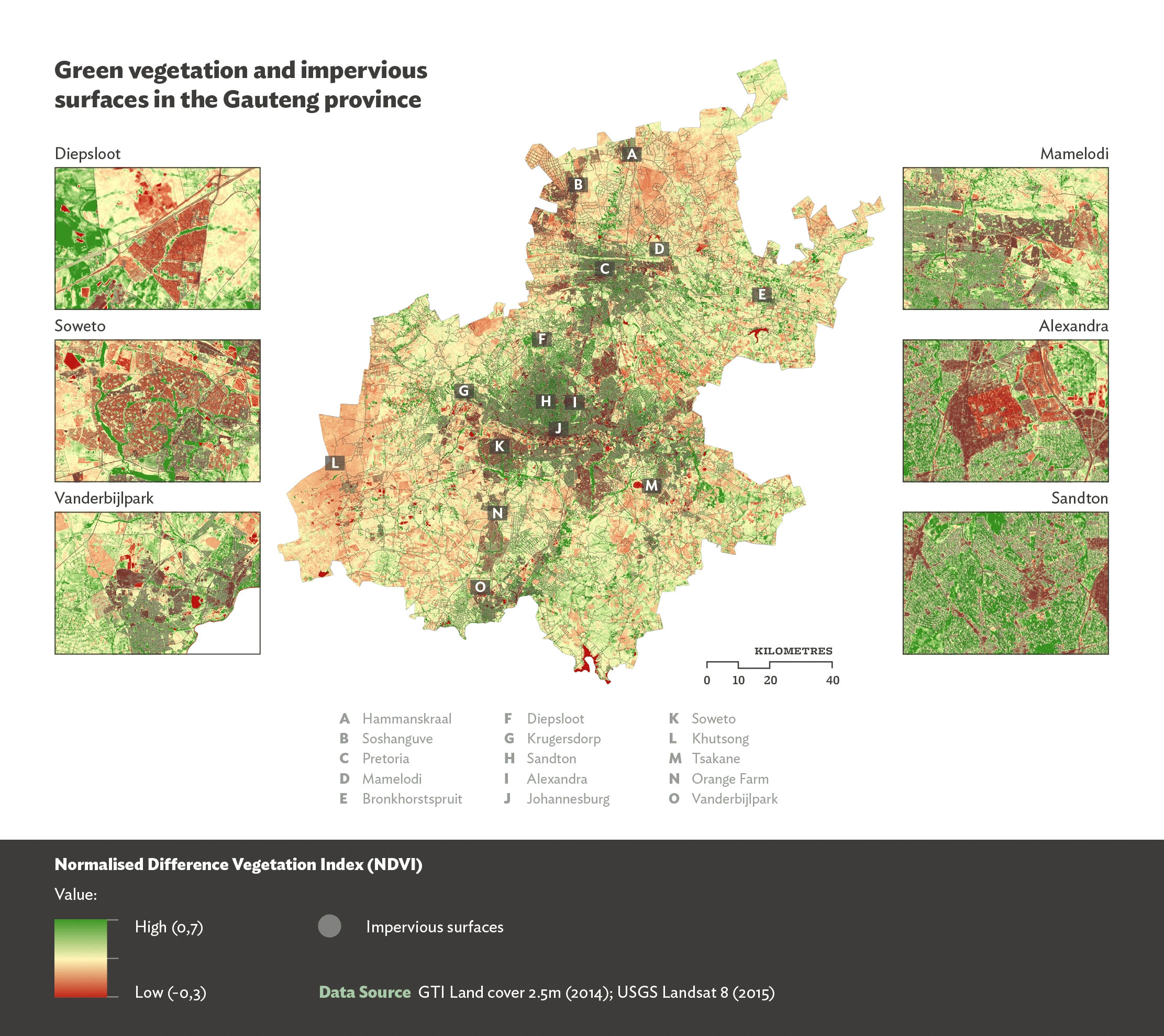 NDVI mapping can also indicate the impact of past land use practices on the surrounding environment. Mining has played an important role in shaping the GCR. The Witwatersrand mining belt has very low NDVI values, particularly in areas utilised for mine tailings and slimes dams. Although some vegetation does exist in these areas, it is limited.

This Map of the Month demonstrates the distorting effects of urban development on ecological systems. However it also shows areas of concentration (and deficit) of planted green infrastructure that can play an important role in the delivery of urban infrastructure and services, as well as in minimising disaster risk and enhancing the liveability of our cities. These maps suggest that green infrastructure investments should be targeted at areas where low NDVI values correspond with low income and a lack of key services.

For more information on the GCROs research on Green Assets and Infrastructure see the project page.

*Notes on how NDVI is calculated

The Normalized Difference Vegetation Index (NDVI) is a vegetation index used to analyse the photosynthetic activity of vegetation. Photosynthesis is the process used by plants to convert light energy into chemical energy needed as fuel.

The NDVI calculations in this Map of the Month used Landsat 8 data acquired from the United States Geological Survey (USGS) explorer site. NDVI results and interpretation will differ depending on the time of year the images were acquired. This map used December 2015 imagery because of the quality of imagery (cloudless satellite imagery).