The extent to which urban areas are sprawling outward, taking up increasing amounts of land, is a major policy concern. This map of the month provides an analysis of urban growth in Gauteng between 1990 and 2020, recently published as part of a GCRO Occasional Paper entitled Spatial Trends in Gauteng (Ballard, Hamann and Mosiane 2021). New data provided to us by GeoTerraImage (GTI) allows us to analyse the changing pace of urban sprawl. The analysis shows that sprawl – as measured in absolute terms by land area added annually – was most rapid in the 1990s, that it slowed down in the 2000s, but that the pace of growth picked up again between 2010 and 2020. (See the methodological note below for details about the calculations.) The maps of urban sprawl (Figures 1-3 below) present this periodisation of spatial change visually. To support our interpretation of these maps, we begin with a quantitative breakdown of the growth of urban land cover.

The GTI data can be further broken down to show the land uses that are dominant. Table 2 presents land use for the province as a whole. It shows that even though Gauteng is frequently referred to as South Africa’s most urban province, almost nine tenths of the province is in fact non-urban. It confirms that the percentage of non-urban land is declining over time, from 91.3% in 1990 to 86.2%, and that urban cover in the province is expanding. It indicates that the residential category is the largest contributor to Gauteng’s urban land cover, with 10% of the province’s total area being covered by residential land use in 2020. The remaining urban land cover, including commercial, industrial, institutions and utilities, covered less than 3% of the province’s land.

Table 3 shows the composition of new urban areas that have appeared since 1990. The final column shows that just over 80% of Gauteng’s urban expansion since 1990 has been residential land use while just under 10% has resulted from commercial and industrial growth. In other words, urban sprawl over the last three decades has been overwhelmingly driven by residential land use. 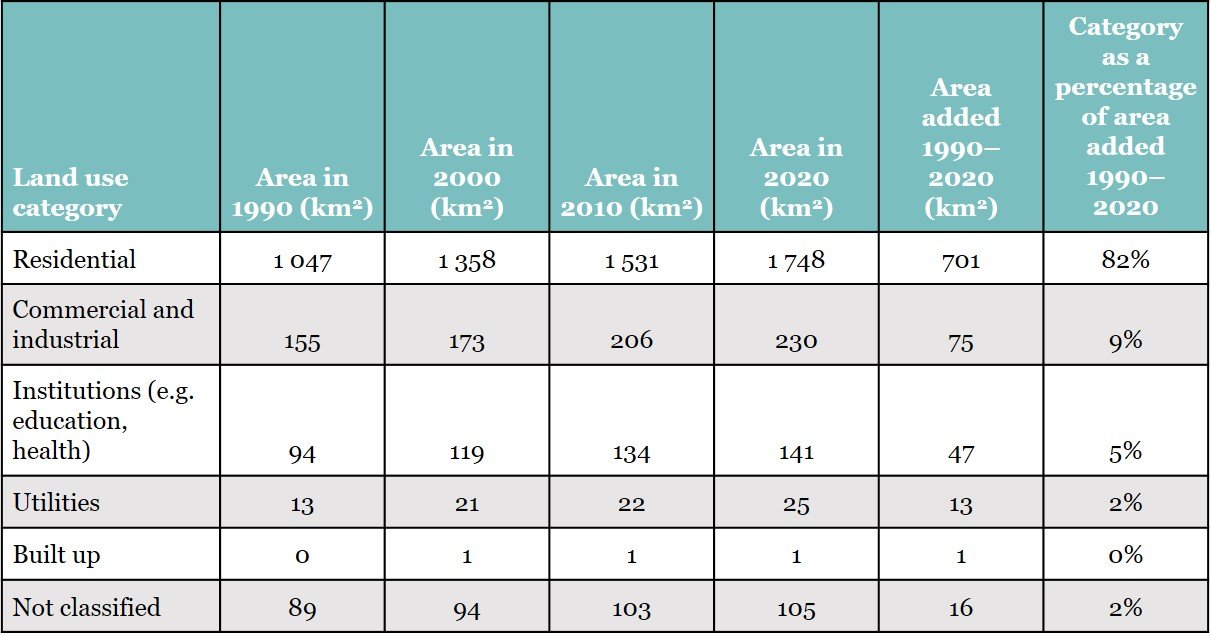 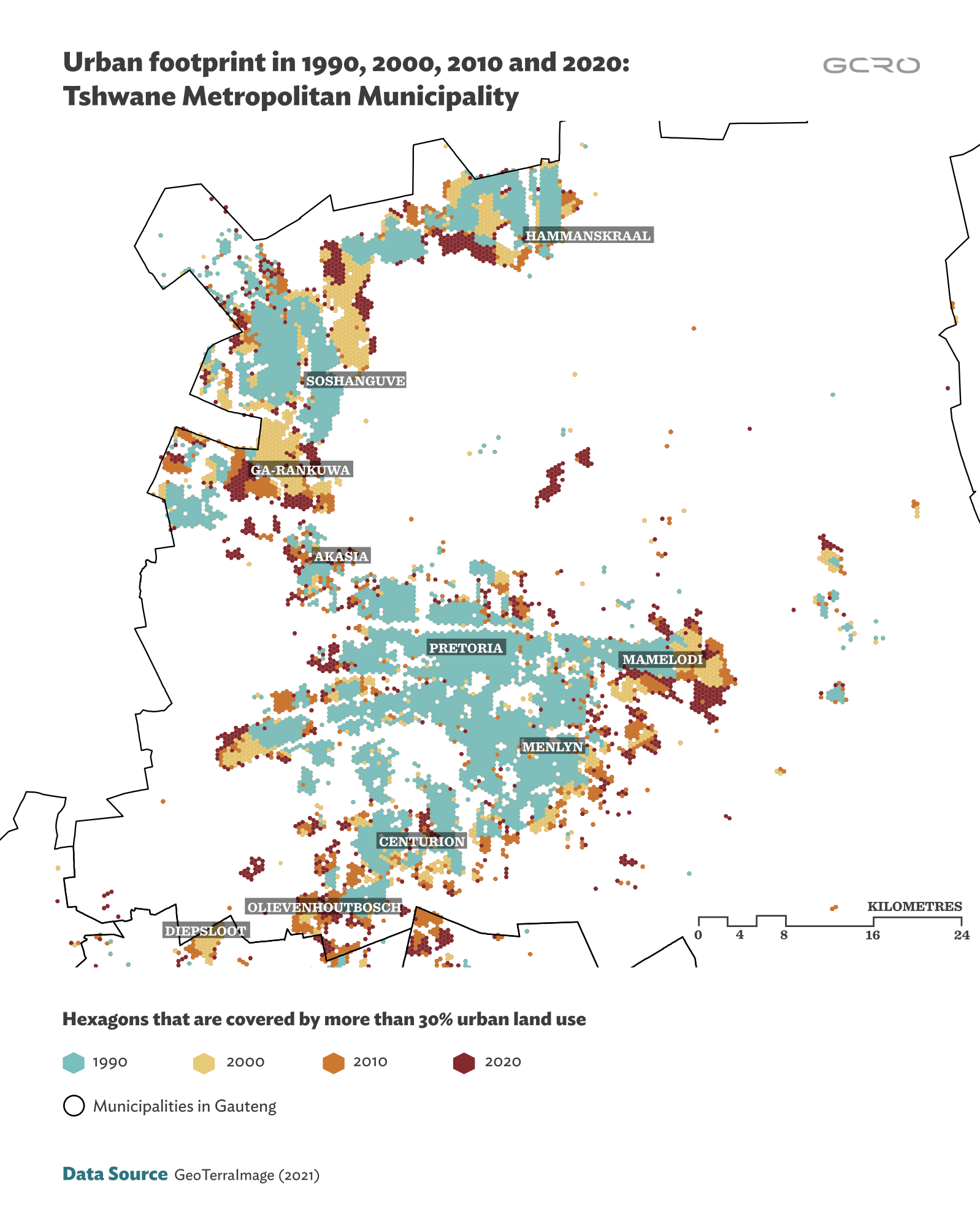 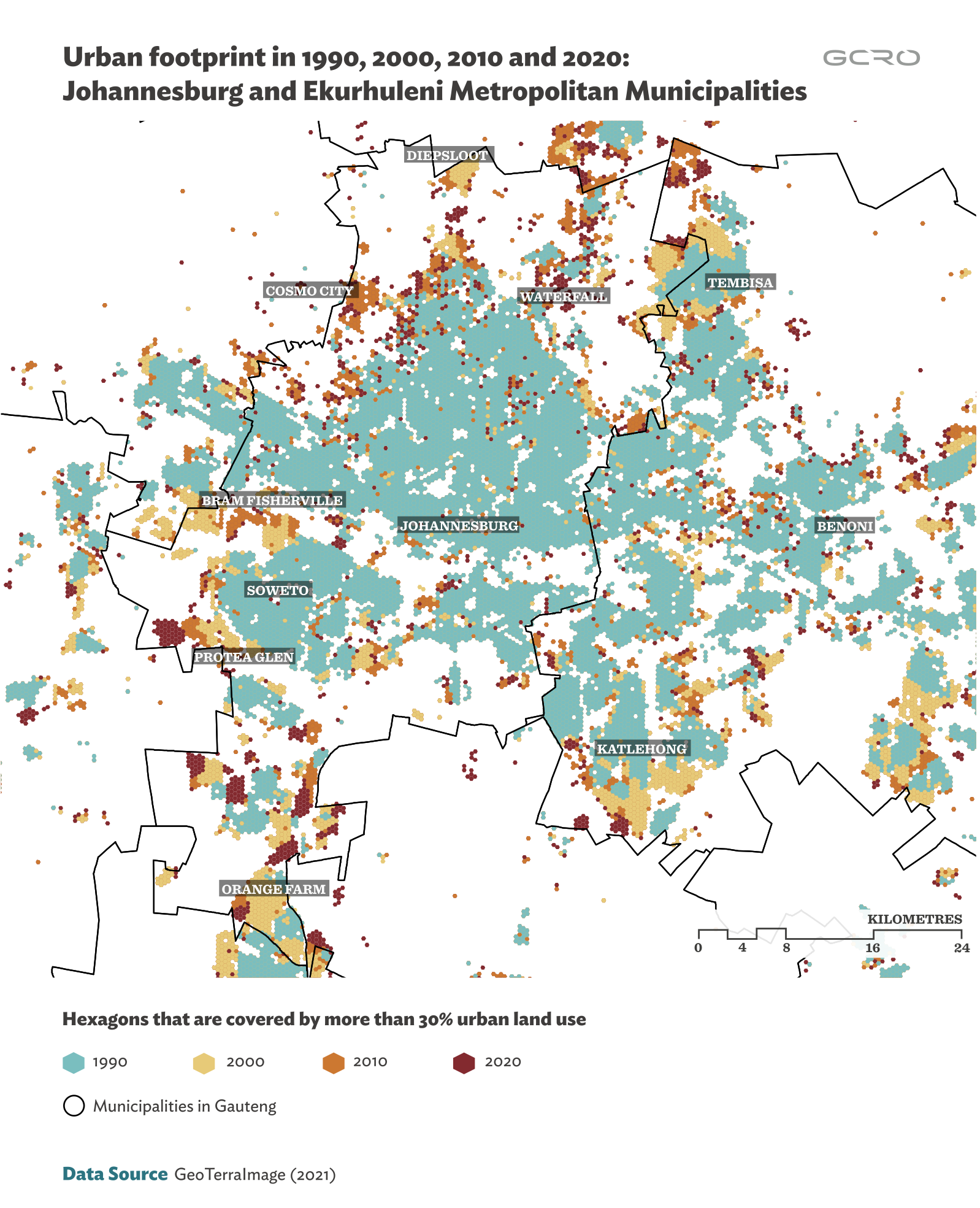 Some expansion has occurred through the expansion of townships, in particular through three forms of settlements: (1) some areas alongside townships have been settled as a result of informal occupation, such as informal settlements south of Mamelodi in Tshwane (Figure 2). (2) Low cost housing settlements have been built alongside townships, like Bramfischerville north of Soweto, (3) private sector developers have provided suburban housing for those able to access mortgages, like Protea Glen west of Soweto (Figure 3).

The expansion of residential areas with more expensive properties is also evident. For example, north-west of Johannesburg, east of Pretoria, and south-east of Centurion residential development has expanded outwards with the development of townhouses and gated communities (Figure 2).

Other settlements are entirely new and did not “grow out of” existing settlements. For example, Diepsloot did not exist until the mid 1990s, and rapidly became a major settlement while Cosmo City (which appears in the 'orange' 2010 data) was not attached to any nearby historical township, but provides much needed welfare and affordable housing in the north-west of Johannesburg, otherwise dominated by expensive property.

Figure 3 also underscores the extent of recent urbanisation of land in the south of Johannesburg. These include new informal settlements that have developed around Lenasia South and Ennerdale (some of the areas shaded red to the north of Orange Farm).

Although commercial and industrial land use contributes smaller percentages to urban sprawl, it is significant in its own right (also see Naidoo 2019). These tend to be smaller in extent than large new residential settlements, but their impact on altering the urban fabric remains significant. One such area, which experienced substantial warehouse development, is the Pomona area, north of Benoni and close to the O.R Tambo International Airport (Figure 4).

Figure 4: Commercial and industrial expansion in Pomona between 2010 and 2020. Data source: GoogleEarth (2021) 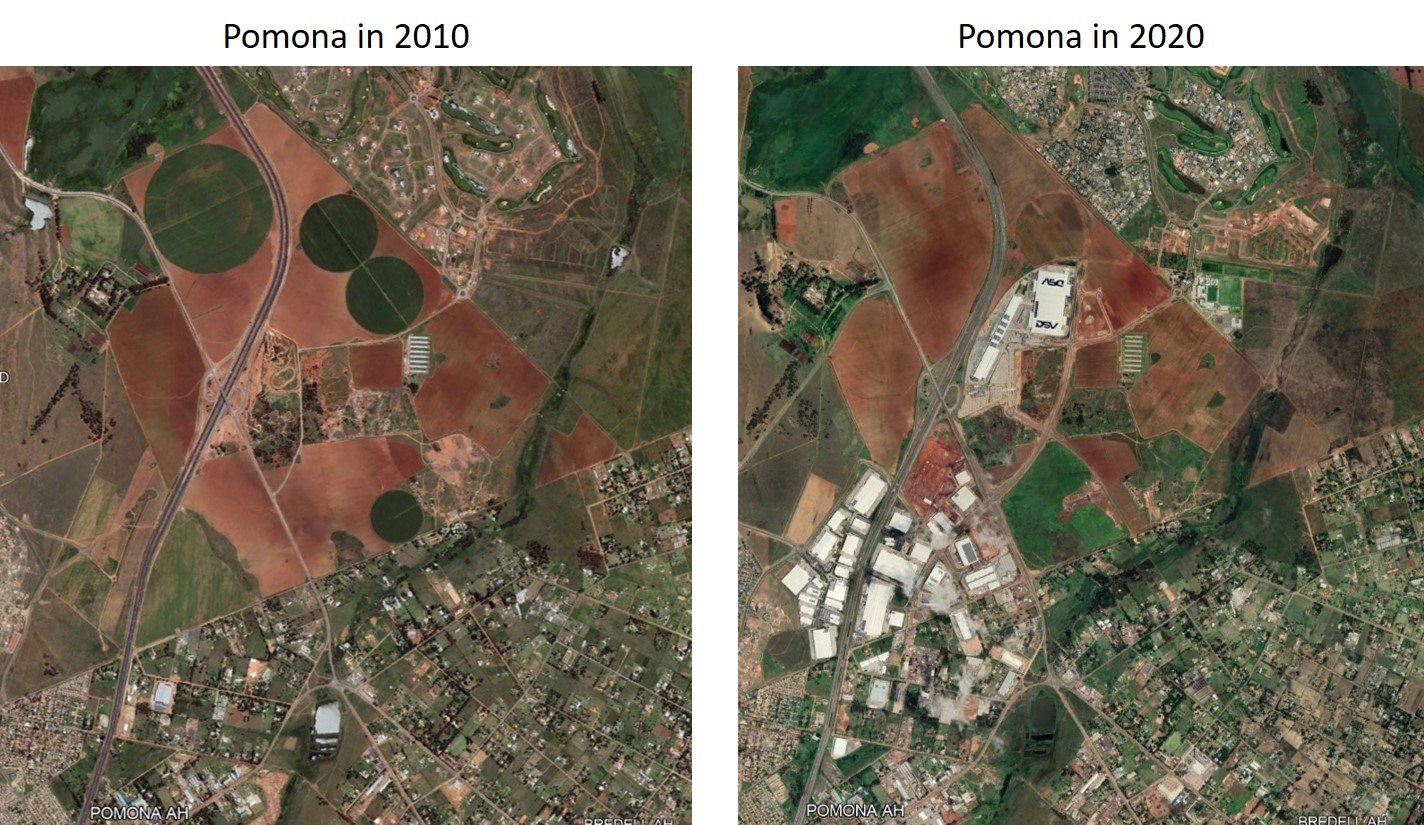 These calculations and maps were done by the authors from the raw data provided by GeoTerraImage and are based on a narrow definition of urban land that excludes mining, smallholdings, villages and agriculture, which constituted a further 2.1% of the province’s land in 2020. Smallholdings are transitional spaces insofar as many pay municipal rates and are serviced by municipal infrastructure, and many are densifying. The urban land-use classes in this analysis, include GeoTerraImage’s classification of ‘Commercial’, ‘Industrial’, ‘Education’, ‘Healthcare Facilities’, ‘Institutions’, ‘Tourism’, ‘Community Services’, ‘Cluster housing’, ‘Formal housing’, ‘Informal housing’, ‘Recreation & Leisure’, ‘Utilities’, ‘Transport’, and ‘Built-Up’ ('Built-up includes all conservation and forestry-related structures). Each ‘pixel’ is a hexagon with an area of 0.103755 km2; it is shaded as ‘urban’ if more than 30% of the area of that hexagon is urban.

It is recognised that there is a distinction between 'urban land cover' as the type of land that can be recognised and described in satellite-imagery derived datasets, and 'urban land use' which is the actual use of property regardless of its formal categorisation. This article is based on GTI data which categorizes the satellite-imagery derived data into different 'land uses', and so the terms land cover and land use are deployed interchangeably here.