South Africa celebrates 20 years of democracy this month. There is considerable reflection underway on how far we have come as a society since the ending of apartheid. This map of the month gives a picture of how the overall state of development has changed in different municipalities in Gauteng between 1996 and 2012. It uses the Human Development Index, a composite measure which provides a multi-dimensional view of poverty, that was developed in the 1990s for the United Nations Development Programme. One part of the index focuses on income (in the form of GDP per capita in US$ PPP), but this is balanced by other components that indicate health (measured by average life expectancy at birth) and education (measured by a combination of mean years of schooling of a typical 25 year old and expected years of schooling of a 5 year old). The HDI has been critiqued as being reductionist; other multi-dimensional indicators of poverty – such as an index of multiple deprivation – are possible; and still other measures such as the GCRO’s own ‘Quality of Life’ and ‘Marginalisation’ Indexes are more sophisticated, digging deeper into a much wider variety of variables (see the 2013 State of the GCR review for more information). Yet the HDI is commonly in use and convenient for comparing levels of development across countries and regions (Ivanova et al 1999).

In our map HDI data from IHS Global Insight is mapped for 1996 and 2012. Average HDI for Gauteng was 0.68 in 1996. This decreased slightly to 0.67 in 1998 where it held steady for the next decade, showing the impact of the late 1990s recession, and the progression of HIV & AIDS through the South African population which significantly reduced average life expectancy. It then rose in the mid- to late-2000s to stand at 0.74 in 2012. By international comparison, Norway had the highest HDI at 0.95 in 2012, Niger had the lowest at 0.3 and Yugoslavia and Peru were the countries with the nearest HDI (0.74) to that of Gauteng. These countries rank at 77 and 78 of all the 186 countries on the index. South Africa as a whole had a HDI score of 0.63 at rank 121. The map shows Johannesburg, Tshwane and Midvaal with the highest HDI in 2012, at 0,75. However some of the region’s more peripheral areas have dramatically caught up between 1996 and 2012. The greatest increase at a municipal level was in Westonaria (0.56 to 0.69).

HDI for whites has historically been much higher than for other race groups, and remains so at 0.90 in 2012. This is equivalent to the HDI of Denmark, ranked 15 of all countries on the index. By comparison, Africans had an HDI of 0.68 in 2012, equivalent to that for El Salvador, ranked 107. On the plus side the HDI of Africans, coloureds and Indians/Asians has risen significantly over the last two decades, reflecting dramatic improvements in income and education opportunities since apartheid. 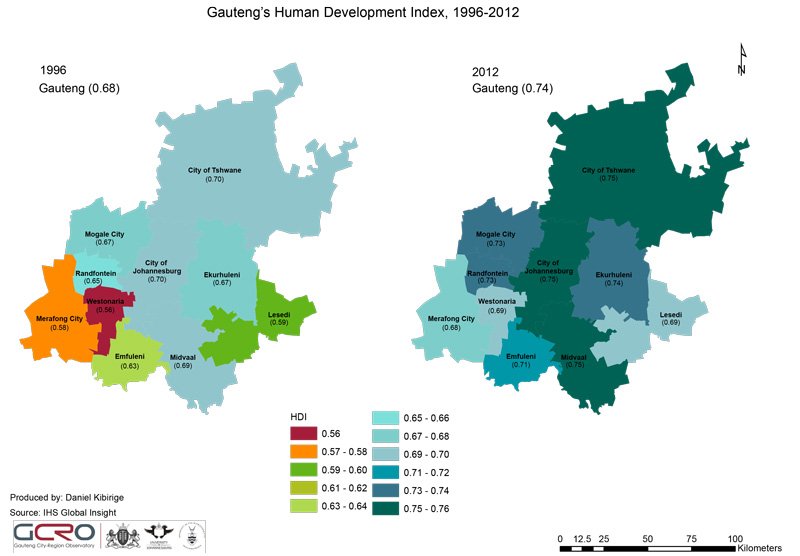 Ivanova, I. Arcelus F.J. and Srinivasan G. (1999) ‘An assessment of the measurement properties of the Human Development Index’, Social Indicators Research 46: 157–179.