The November map of the month shows new residential developments in Gauteng. The map was compiled using the latest GeoTerraImage (GTI) 2013 release (set1 and set2), with a point per building (and associated land use) captured for the years 2001 and 2010. Focus was placed on the growth of formal houses, townhouses and estates and security villages, showing new development since 2001 through the use of a point density map per square km drawn from the formal residential land use subclasses. (A map of informality is depicted in the September 2013 map of the month of backyard structures.) An increase in formal housing is clearly evident on the poorer, less accessible edges of the cities and province, indicative of the mass roll out of mainly government provided housing. In contrast, the development of town houses, mostly driven by private developers, is visible as a “belt” stretching across the wealthier, well located northern suburbs of Johannesburg, southern suburbs of Tshwane and eastern Ekurhuleni. The developments of housing estates and security villages have followed a similar pattern, with some estates situated on the edge of the urban area. In some suburbs, the GTI data reflects a reclassification from residential buildings (in 2001) to enclosed security villages (in 2010), evidence of an increasingly gated and enclosed society. Note: there are a small percentage of points that represent the same building, but are slightly misaligned in the 2001 and 2010 datasets, which may exaggerate growth in small localised areas in older suburbs. 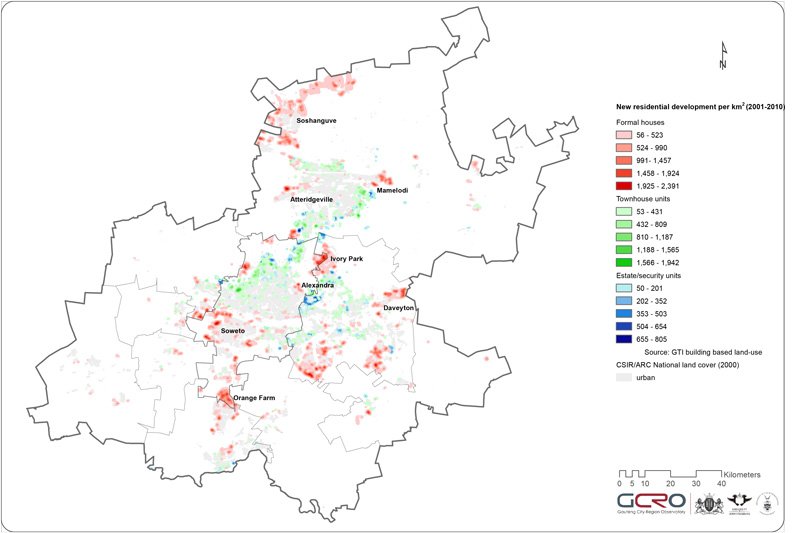