In order to mark National Energy Month, observed in South Africa during May, this GCRO map presents data from an electricity-related question in the sixth Quality of Life survey conducted in Gauteng in 2020/21. The map shows the percentage of respondents in each geographical area reporting that they had experienced electricity interruptions on a weekly basis.

Electricity interruptions are caused by overlapping factors related to demand, generation, transmission and local distribution. Constraints on generation periodically result in load-shedding (CSIR 2021), and therefore the vast majority of respondents stated that they experienced at least some interruptions in the year prior to the survey (fieldwork was conducted from October 2020 - May 2021). However load-shedding is unlikely to have been the cause of weekly interruptions by itself since it did not occur on a weekly basis over this period. Load-shedding therefore needs to be considered alongside other causes of interruptions including lightning, insufficient maintenance, transformer malfunctions, overloading of infrastructure, cable theft, vandalism and illegal connections. While most Gauteng residents reported experiencing at least occasional outages, weekly outages occur in certain townships and informal settlements.

Table 1: In the past 12 months, how often did you experience electricity interruptions? 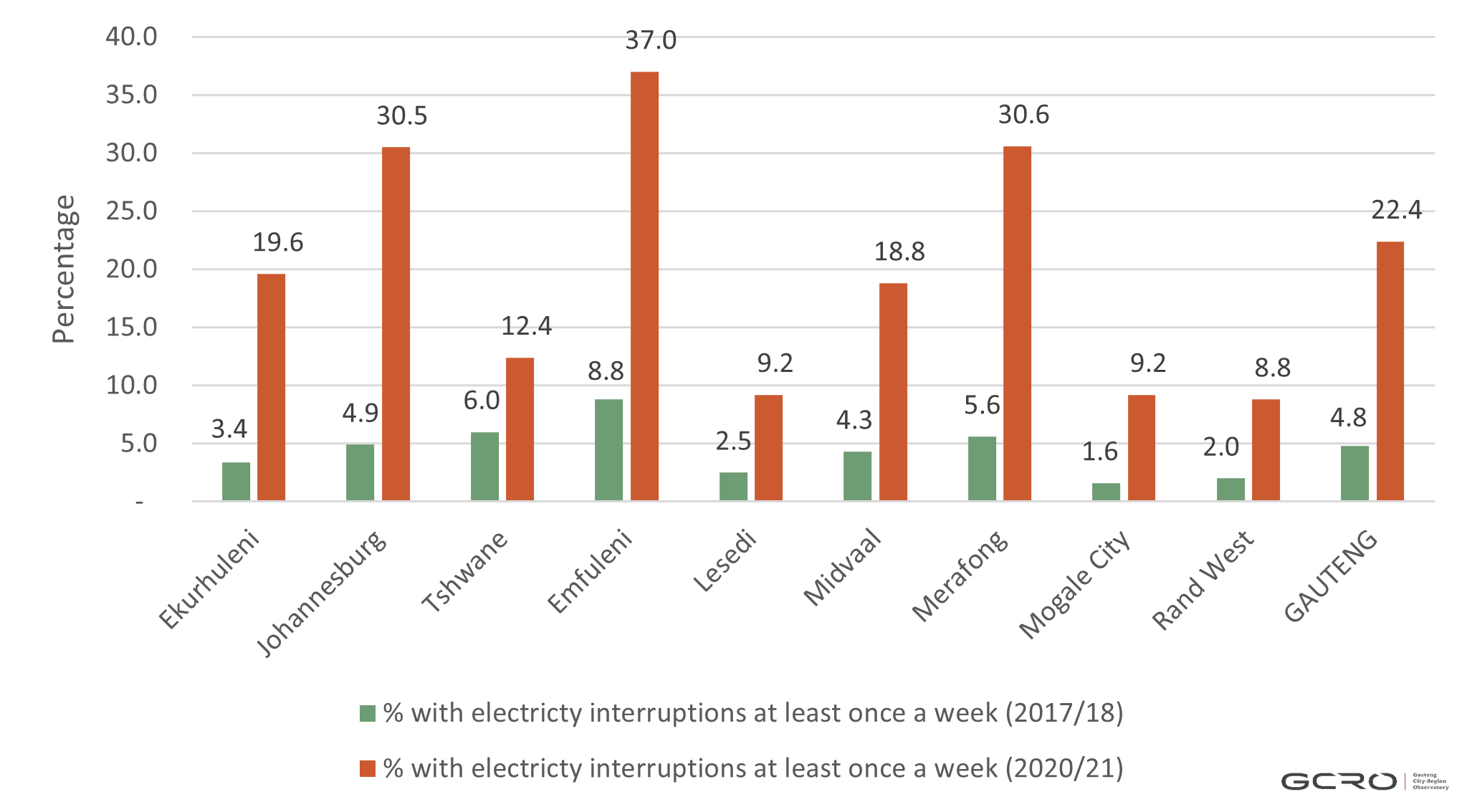 Figure 2 below provides the percentage of respondents in each geographic area who said that they experienced interruptions every week (mesozones were used for geographic areas, see Note on Method below). In mesozones shaded orange, 38.2–61.9% of respondents reported weekly interruptions. These include areas that are in or near Mabopane, Daveyton, Soweto, Orange Farm, Fochville and Sharpeville. (Note that weekly interruptions may occur in one part of a mesozone, which explains why some respondents indicate that they experience weekly outages and others do not.) The spatial pattern of regular interruptions is fairly widespread across the City of Johannesburg and Sedibeng District Municipality, while the other Districts and Metros show more concentrated patterns of interruptions. The worst affected areas – those shaded dark red, with between 62% and 100% of respondents experiencing outages at least once a week – are Wedela (West Rand District), Lawley (City of Johannesburg) and Tsakane (Ekurhuleni). These are areas in some of Gauteng’s townships, state housing projects and informal settlements, characterised by rapid growth, high population densities (brought about in part by backyard dwellings) and infrastructures that were originally development for much smaller populations. 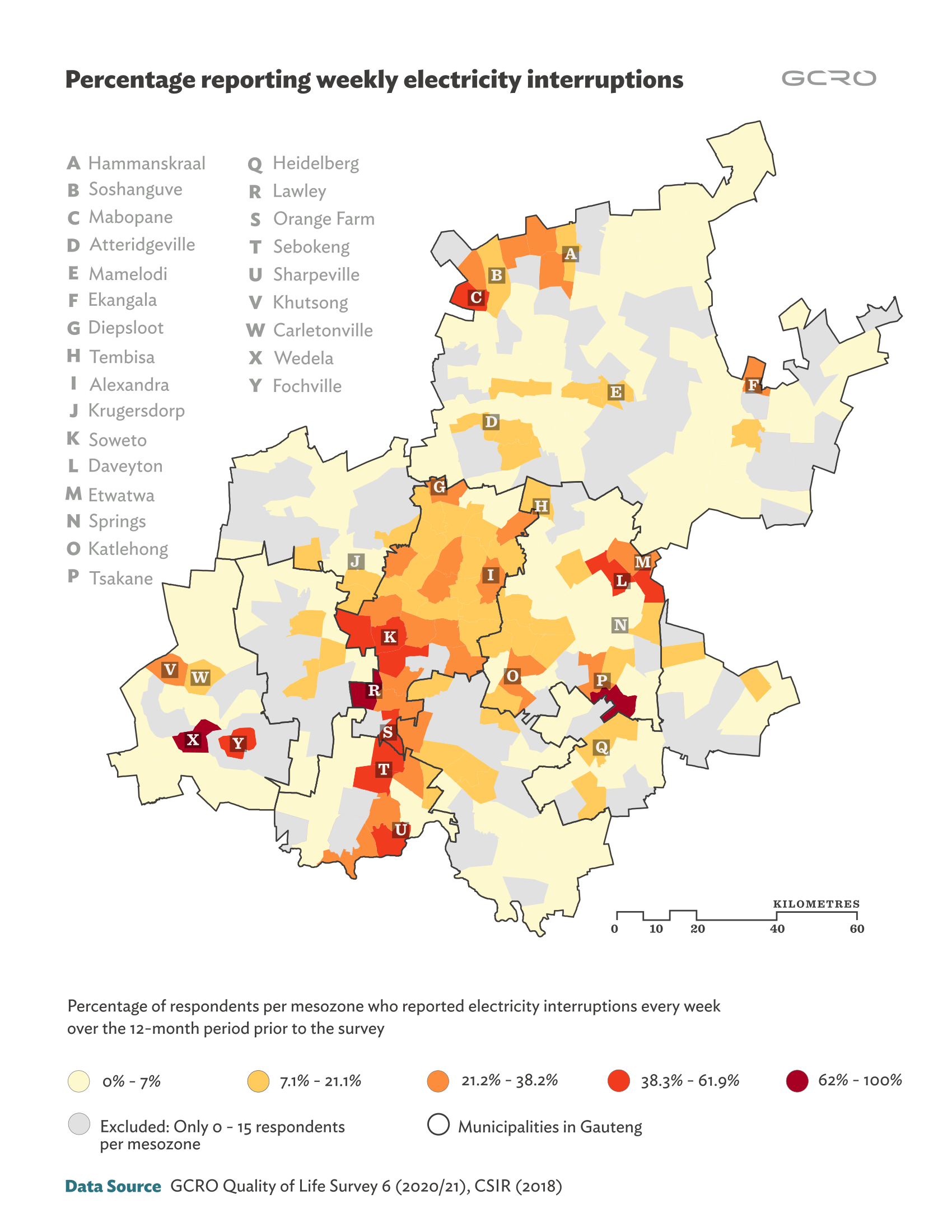 Unplanned, unpredictable and lengthy electricity cuts are a significant cause for concern in the Gauteng City-Region. These interruptions have considerable implications since there are important relationships between infrastructure quality, economic growth and investment, and households’ urban quality of life. They represent increasing uncertainty and frustration for businesses, and a rising burden on households.

Mesozones are a matrix of polygons, every one roughly 50km2 in size, covering the entire country. The size of mesozones enables spatial comparison in a way that is sometimes more effective than other spatial layers with disproportionately sized polygons, such as that of electoral wards (CSIR 2018, Gotz et al. 2022). The mesozones shown in grey had samples of 15 or fewer respondents and were therefore excluded from the analysis.