The location of population in relation to economic activity in the Gauteng City-Region (GCR) has been a subject of considerable interest from a number of researchers and institutions (Mans et. al. 2018; Peberdy, 2017; Budlender and Royston, 2016; Gauteng Planning Division, 2016; Wray and Kibirige, 2014; GCRO, 2011). This Map of the Month contributes to that body of work, highlighting a misalignment between where people live and where major investments in public and private goods and services are created.

We use the mesozone polygons of 50 km2 designed by the Council for Scientific and Industrial Research (CSIR, 2018) to assist in the kinds of spatial analyses made here. StepSA and the CSIR developed these mesozones, dividing the country into equally sized units that still follow administrative and physical boundaries (Budlender and Royston, 2016; Mans, 2018). Attributed to these mesozones are various administrative boundary details, population figures and Gross Value Add (GVA) estimates between 1996 and 2016. Our calculations use the 2016 population and GVA estimates. The maps show every ‘mesozone’ across the extended Gauteng City Region, using a radius of 175km from the centre of Johannesburg.

In producing the population map (Figure 1), we calculated the population percentages per mesozone by dividing it by the total population of the GCR – defined here at 175 km radius. All the maps below are shaded to indicate the score of each polygon within the map extent. Figure 1 represents the population share per mesozone, with the highest share – between 2.7% and 3.4% – shown in dark red, while those with the lightest shading – the majority – have the least population share of less than 0.09%. Sandton’s share of the GCR population is half a percent (0.557%). Although Soweto’s share is the highest at 3.356%, this population proportion does remain high in selected mesozones on the edges of the extended GCR: 1.288% in Soshanguve; 0.662% in Rustenburg; and 0.493% in KwaMhlanga. Hence the map confirms that although the mesozones in the centre of Gauteng contribute the greatest population share, the GCR population is also dispersed, with larger population concentrations and city-sized settlements found in the edges of its cities and metropolitan areas. 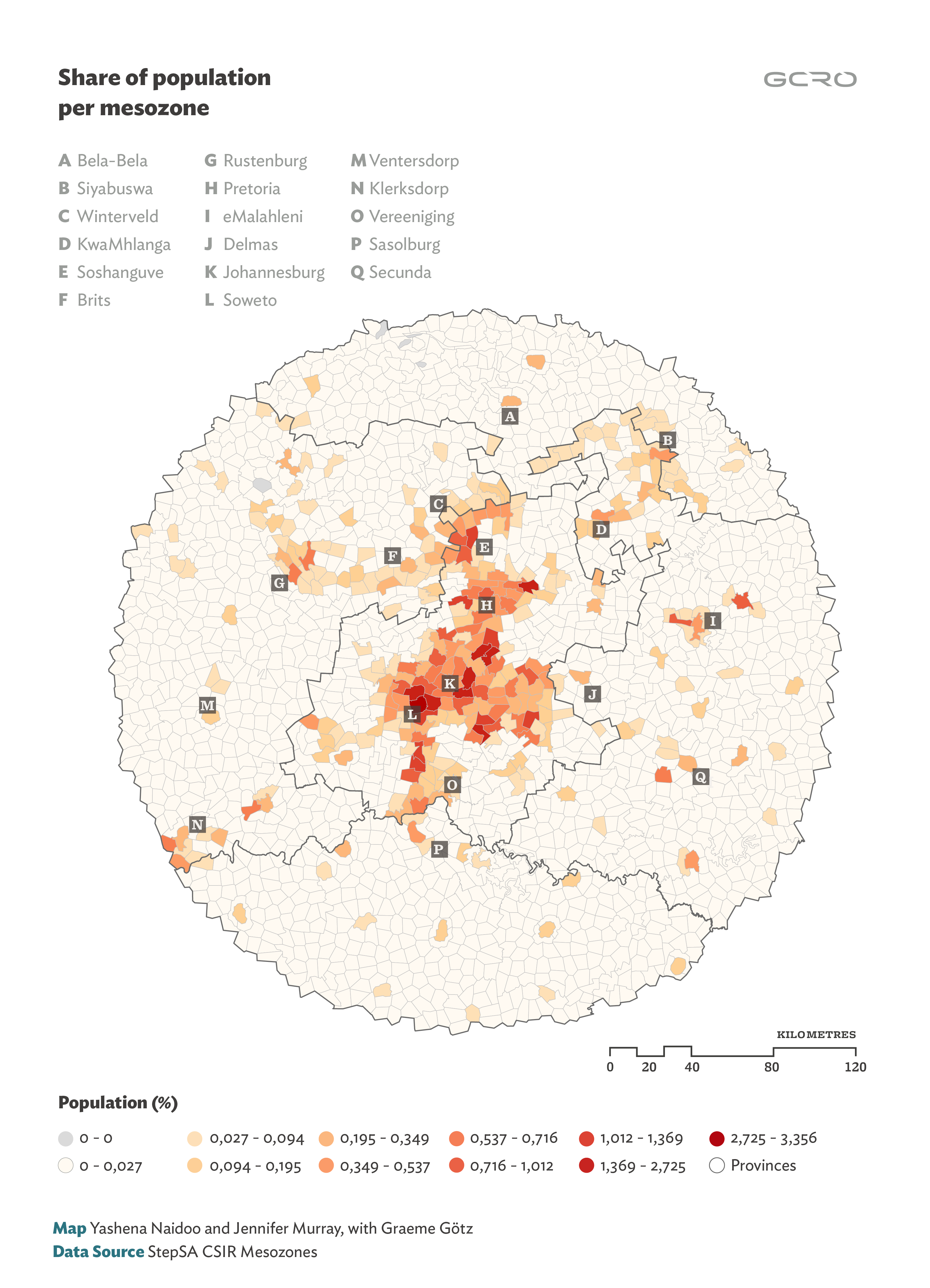 Figure 2 brings into sharp focus the distribution of economic activity across the GCR, removed from other variables such as population. The following economic sectors were selected to create this map: GVA for manufacturing; GVA for electricity, gas and water; GVA for wholesale, retail trade, catering and accommodation; GVA for transport, storage and communication; GVA for finance, insurance, real estate and business services; as well as GVA for general government, community, social and personal services. GVA for Mining and quarrying as well as agriculture, forestry, and fishing were excluded in order to focus on urban economic GVA.

This map’s mesozones are coloured in shades of green, with the dark green mesozones showing areas of highest urban economic activity (3.631%), while those with the lightest shading – the majority – have the lowest share at 0.035%. The map shows that the values for the combined GVA attributes per mesozone are highest in central Johannesburg and Sandton; followed by south-eastern Johannesburg, Rosebank/Parktown, Midrand, Pretoria central and east; Edenvale/Isando; and Bedfordview/Germiston. This clustering of economic activity is then hierarchically followed by areas such as Roodepoort/Florida, parts of Soweto, Randburg, Alexandra, Springs, Vanderbijlpark, Rustenburg outside Gauteng, and many other mesozones in that economic category. The next polygon rank is important in that it features more peripheral areas, including Katlehong, Tembisa, Atteridgeville, and other parts of Soweto. Although Gauteng, especially its metropolitan cores, contributes a disproportionate large share of economic activity, the map area as whole is also characterised by some significant decentralised clusters of activity.

Share of economic activity (excluding mining and agriculture) vs population

In generating the map for the share of economic activity and population, we calculated the percentages of gross value added (GVA) contributed by each sector of the economy per mesozone and divided it by the total number of sectors, specifically to arrive at that mesozone's share of the GVA of the entire region (defined by a 175km radius), as represented in Figure 2. We then subtracted the percentage of the region’s population per mesozone (Figure 1) from that of the mesone's share of total GVA (using the selected sectors) across the region. In Figure 3, the green mesozones on the map have greater shares of gross value add relative to their share of total population, while red areas have less share of the gross value added than their populations. This map reveals that the edges of Gauteng’s metropolitan areas are characterised by large concentrations of people relative to the economic activity in those peripheries. In particular, there are many mesozones to the north, north-east and north-west, just inside and outside of the Gauteng boundary, that have a greater share of the region’s population than they do of urban related economic activity. 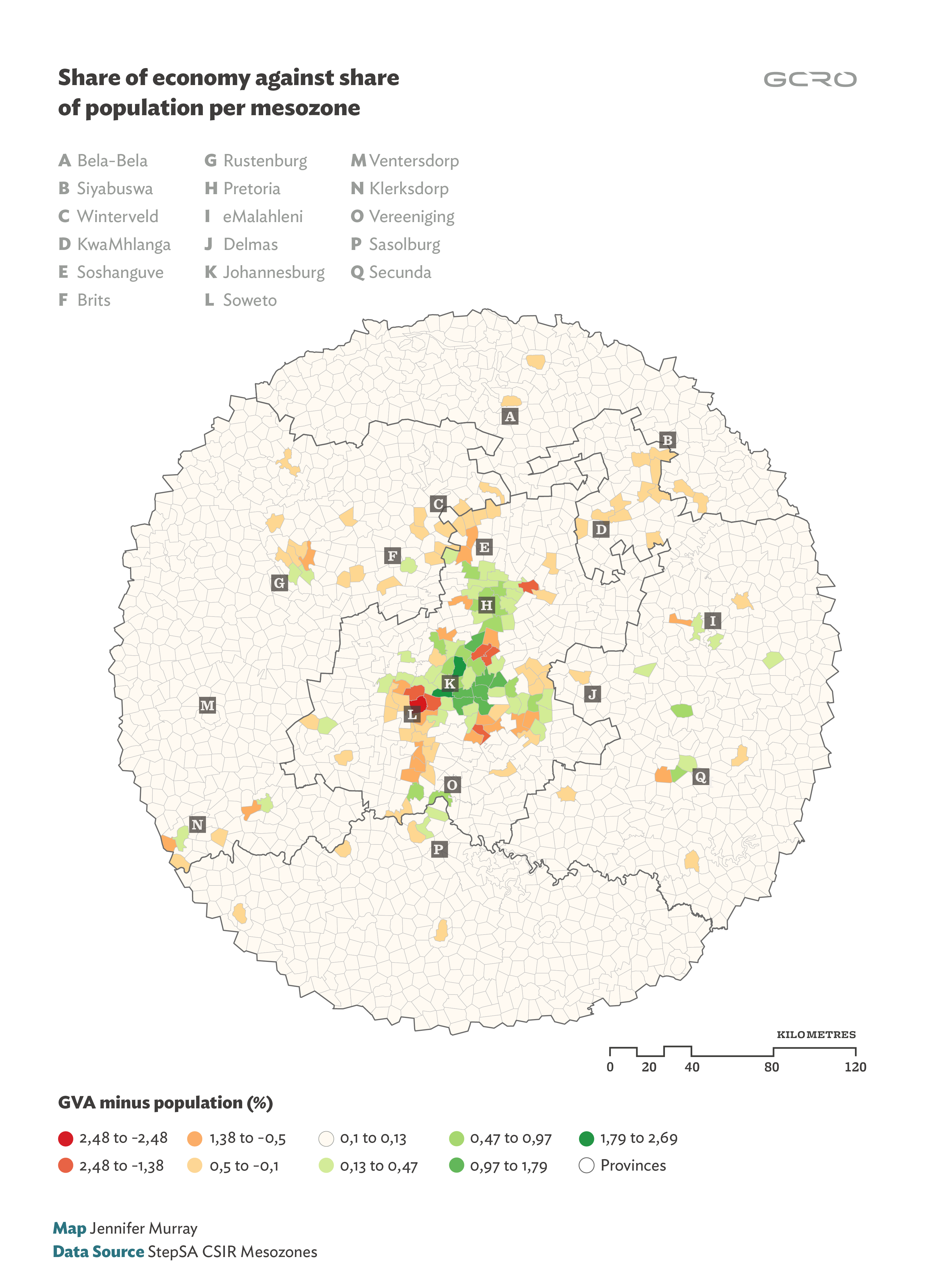 Table 1 provides a more detailed breakdown of this disjuncture between economic activity in the selected sectors and population distribution. The share of urban economic activity is the highest around Sandton, where GVA totaled R 38 763 Million in 2016. This comprised 3.247% of the region’s GVA. However, it has only half a percent of the region’s population (0.557%). In contrast, Soweto’s GVA share is far less relative to its share of population (0.878% and 3.356% respectively). It is also less than that of Rustenburg, notwithstanding the exclusion of mining and quarrying as well as agriculture, forestry and fishing. Again, the northern peripheries inside and outside of the Gauteng boundary generally have a greater share of the region’s population than they do of the economic activity. Much of these areas, from Rustenburg in the west to Siyabuswa in the east, formed part of the former Bophuthatstwana and KwaNdebele bantustans, and are still experiencing underinvestment in economic activity. This wider distribution of GVA investments, population, and other attributes make the extended GCR into a space of diverse urban centres, albeit with those in the core areas holding greater socio-economic significance (Mosiane, forthcoming; Mosiane et al., forthcoming). 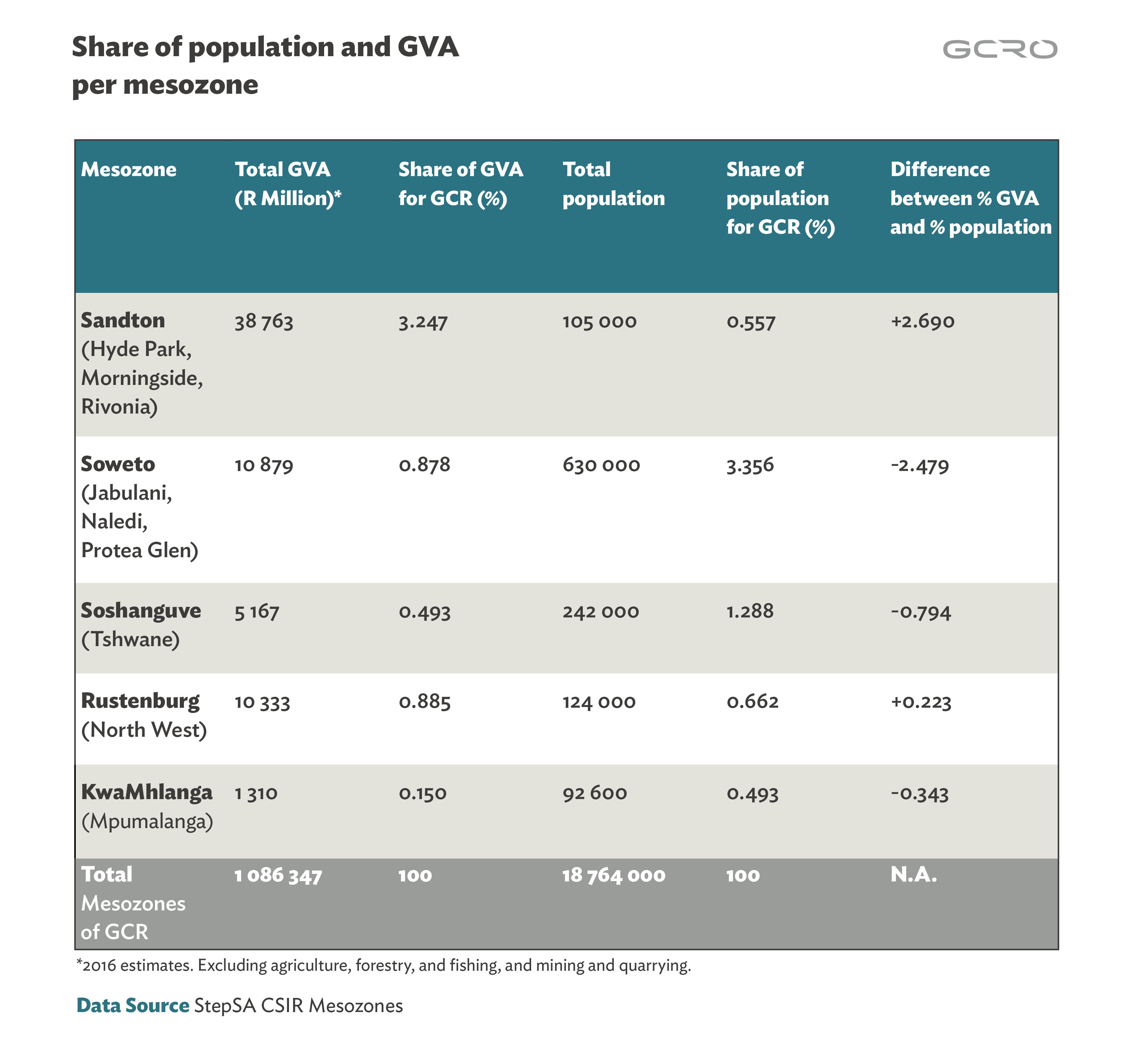