Muslims constitute just 4% of the population of Johannesburg but their spatial presence is accentuated by the presence of mosques across the city’s skyline. The first mosque in the city was built in Kerk Street in the city centre before the turn of the last century. Over the course of a century and a quarter, Muslims have entrenched their socio-spatial presence in all corners of greater Johannesburg despite the restrictions imposed by apartheid spatial planning and the opportunities that emerged subsequently in the post-apartheid period.

In 2014, Yasmeen Dinath, Yusuf Patel, and Rashid Seedat wrote one of the first academic accounts that traced the socio-spatial presence of Muslims in the city (Dinath et al., 2014). In an effort to update the original work, new research is underway at the Gauteng City-Region Observatory (GCRO), including a survey of mosques in Johannesburg on which this Map of the Month is based (Patel and Tayob, 2021).

Distribution of Muslims across the city

The Quality of Life V Survey (2017/18) shows that 2.4% of respondents practice Islam as a religion in Gauteng as a whole, while 4.1% are practicing the faith in the City of Johannesburg. The majority of Muslims in South Africa emanate from the Indian and coloured communities. Although Hinduism is by far the largest faith amongst Indians, followers are concentrated in KwaZulu-Natal. In Gauteng, Muslims constitute the numerical majority in the Indian community (Pillay et al., 1989). In the Coloured community, “Cape Muslims” (a term preferred over “Malays” or coloured Muslims) constitute a significant minority (Jeppie and Vahed, 2005). As a result of immigration from African countries such as Malawi, Mozambique, Nigeria, and Somalia, as well as the outcome of active proselytising and conversion, African Muslims are increasing in number across the city. The map below (Figure 1) shows the percentage distribution of Muslims by planning region in the City of Johannesburg.

Figure 1: Distribution of Johannesburg’s Muslims across the city 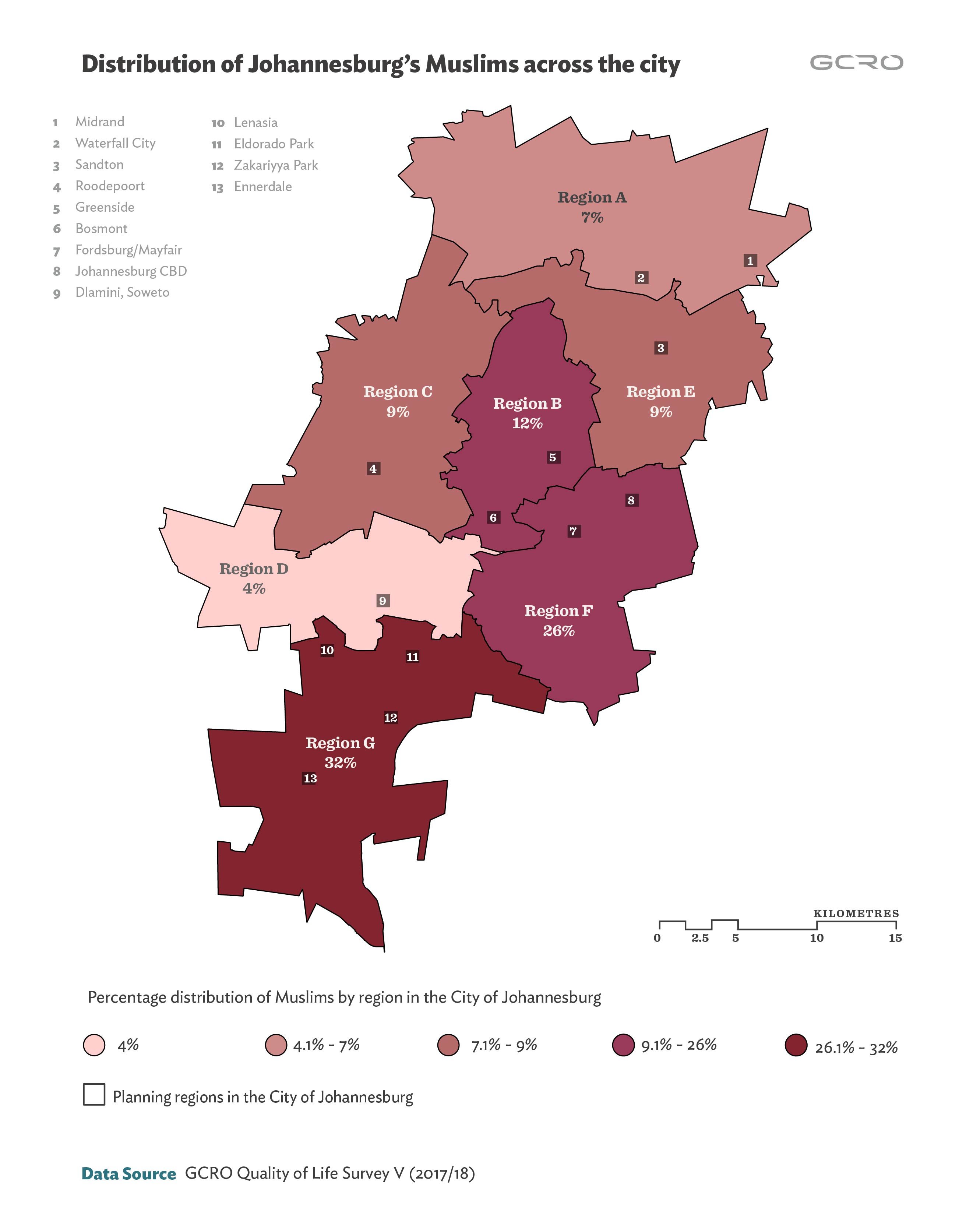 The majority of respondents practicing the Islamic faith in Johannesburg are located in the south, southeastern and central parts of the city. Region G, comprising the Indian township of Lenasia and the coloured townships of Eldorado Park and Ennerdale, has thirty-two percent of the total Muslim respondents in the city.

The CBD and the suburbs of Newtown, Fordsburg and Mayfair are located in Region F. This part of the city has the presence of a large Indian Muslim population; and significant numbers of South Asian (India, Pakistan and Bangladesh) and African (especially Somali) Muslims. The proportion of Muslims in Region F is twenty-six percent of the total.

Region B comprises several densely populated and historic coloured townships west of the city centre such as Riverlea, Coronationville, Newclare and Bosmont which house a significant presence of Muslims. Historically white suburbs in Region B such as Greenside, Emmarentia, Northcliff and Houghton have experienced a large influx of predominantly Indian Muslims in the post-apartheid era. This constitutes twelve percent of the city’s Muslim population.

Regions C and E each make up nine percent of Muslim respondents, with the former including the Roodepoort area and the latter concentrated in the Indian township of Marlboro Gardens. Region D is the Soweto area that comprises four percent of the total Muslim respondents. The seven percent in Region A, in the far north of the city, are dispersed in various neighbourhoods in Midrand and Waterfall.

Figure 2 shows that Muslim prayer facilities were established close to the time the city was first established in 1886 and continued to grow in number during the twentieth century and into the present. A distinction is made between a fully-fledged mosque and an informal prayer facility, known as a jamaat khana. The latter is usually set up in a backyard room or a room in a house or flat and provides worshippers a locality to pray together in the absence of a more formal mosque that would provide all prayers, especially the main Friday jum’muah prayer.

The survey found that a total of just 10 mosques were established in the city by 1960, among these the Jumuah Masjid (Kerk Street mosque) in downtown Johannesburg, the Hamidia Masjid in Newtown, and the 15th and 23rd street mosques in Fietas. The number of prayer facilities more than doubled in the period 1961 to 1980 due to the increasing numbers of worshippers coupled with the effects of the Group Areas Act that was vigorously implemented from the mid-1950s through to the mid-1980s. The acceleration of formal prayer facilities from 1981 to 2000 is due to the removal of restrictions and the movement of people into old white suburbs. Consequently, a total of 47 facilities were established during that period, 41 of which are formal prayer facilities. In the most recent period (2001-2020), a total of 49 prayer facilities have been set up. Of these, 53% are mosques, while 47% are jamaat khanas. The large number of informal facilities in the most recent period means that the process of formalisation is occurring or likely to occur in the future.

Figure 3: Distribution of Muslim prayer facilities across the City of Johannesburg 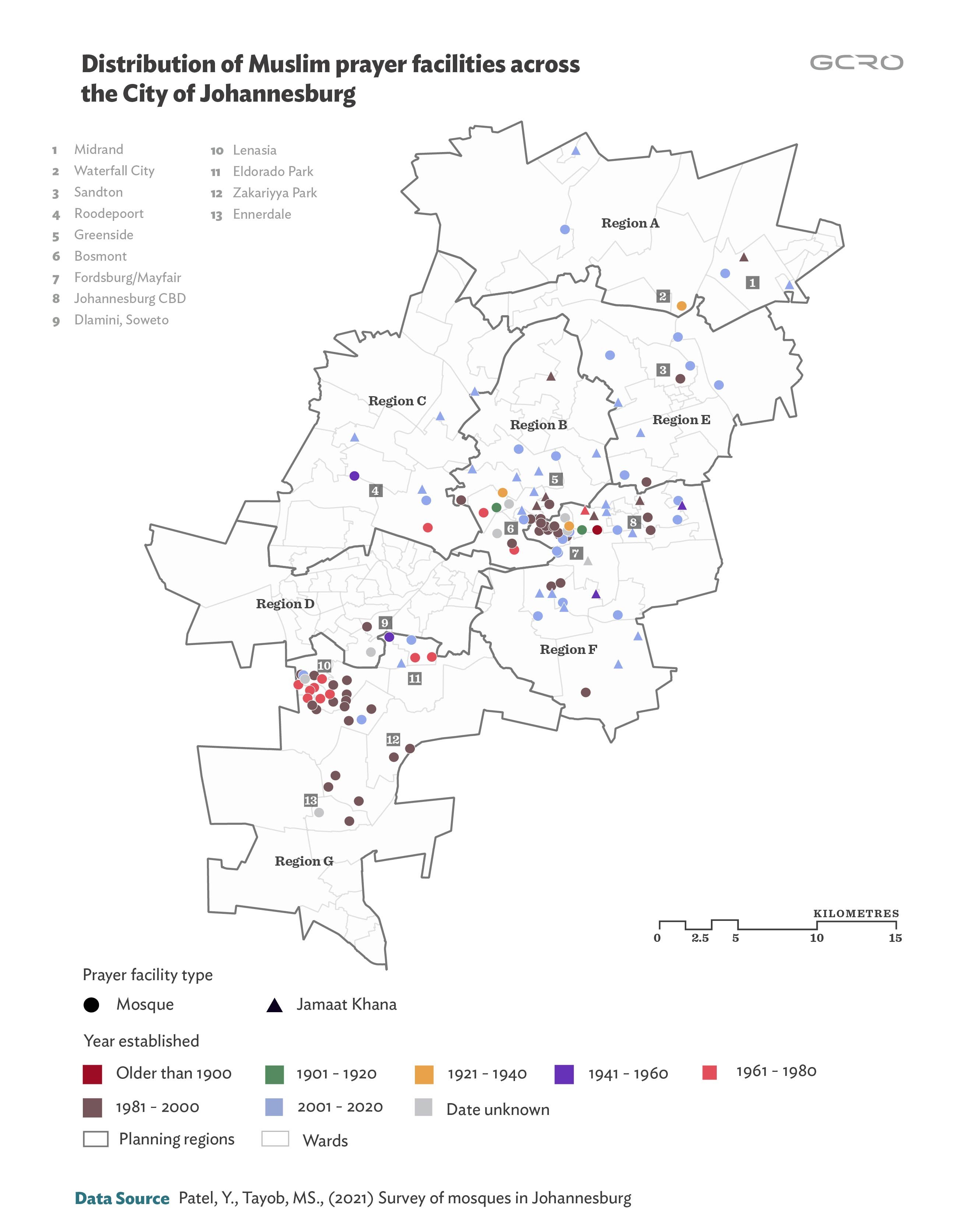 On the whole, Regions F, B and G have the highest number of prayer facilities in the city, located in the central, south-eastern, and southern parts of the city (Figure 3). Regions A, C, and E have significantly fewer facilities. Region D, which is the greater Soweto area, has just two facilities recorded in the sample.

Region F is made up of the Johannesburg inner city (CBD, Fordsburg, Newtown, Hillbrow, Berea, and Yeoville); the cluster of suburbs including and to the west of Mayfair; and the old southern suburbs of Johannesburg. It has a total of 46 prayer facilities (37%) made up of 32 mosques and 14 jamaat khanas. Although there is a substantial number of well-established facilities, there is a large proportion of informal facilities due to the recent dispersal of people in the inner city area and southern suburbs.

Region G has 34 prayer facilities, constituting more than a quarter of all prayer facilities in the city, with just one informal prayer facility. Region G hosted the apartheid group areas of Lenasia, Eldorado Park, and surrounding areas that had the highest number of Muslims during the last century, which explains the large proportion of established facilities. Many of these prayer facilities are coupled with the offices of Islamic organisations and places of religious instruction known as madressas.

Region B has a relatively large concentration of mosques and jamaat khanas due to the presence of Muslims in coloured townships such as Riverlea and the cluster around Westbury-Newclare-Bosmont. The recent proliferation of prayer facilities in places such as Northcliff, Emmarentia, and Houghton is the result of migration by mainly middle-class and wealthy Indian Muslim families in the post-apartheid period.

Region D comprises the greater Soweto area. The first mosque was established in Dlamini township in the early 1980s and although only two prayer facilities are recorded in the sample, it is understood that there are a few others dispersed across the area.

The only facility recorded to have been established in the 1941 to 1960 period in Region C is the mosque in the old Indian area of Roodepoort known as Lappies, which is adjacent to the CBD. Except for one other instance, the rest of the facilities in this region have been established after the turn of the millennium.

The northern areas of the city - Regions A and E - have a dearth of facilities due to the relatively recent developments coupled with the classification of these areas as white during the apartheid years. However, a notable exception is the mosque at Waterfall City, which was established between 1921 and 1940. It was built as part of the Waterval Islamic Institute, popularly known as Mia’s Farm, by the wealthy Mia family.

It is envisaged that the trend of new prayer facilities being established in the northern and western parts of the city will continue into the future due to the dispersal of Muslims to all parts of the city. African Muslims are becoming an important component of the Muslim community and their presence in places like Soweto, the inner city and informal settlements are also likely to increase.