The Group Areas Act of 1950 was scrapped in 1991. Although apartheid’s urban segregation had begun to break down before that point, particularly with the appearance of ‘grey areas’ such as Hillbrow, areas formerly allocated for white, Indian and coloured residents have increasingly become more racially mixed over the last two decades. Pent up demand for better housing options by those residents previously trapped in less desirable locations initially drove this process. For example many white working class neighbourhoods became more diverse very quickly. Over time, growing middle-class African, Indian and coloured incomes has produced increasingly mixed middle-class suburbs like Akasia, Bryanston, Roodepoort and Pretoria East (the darker areas visible on Map 1). Such mixing typically reflects the market preferences of some of those with the financial ability to buy or rent more expensive homes, although to be sure not all of those who can afford to do so do leave areas previously designated only for one racial group. For example there are now substantial black middle class populations living in townships. 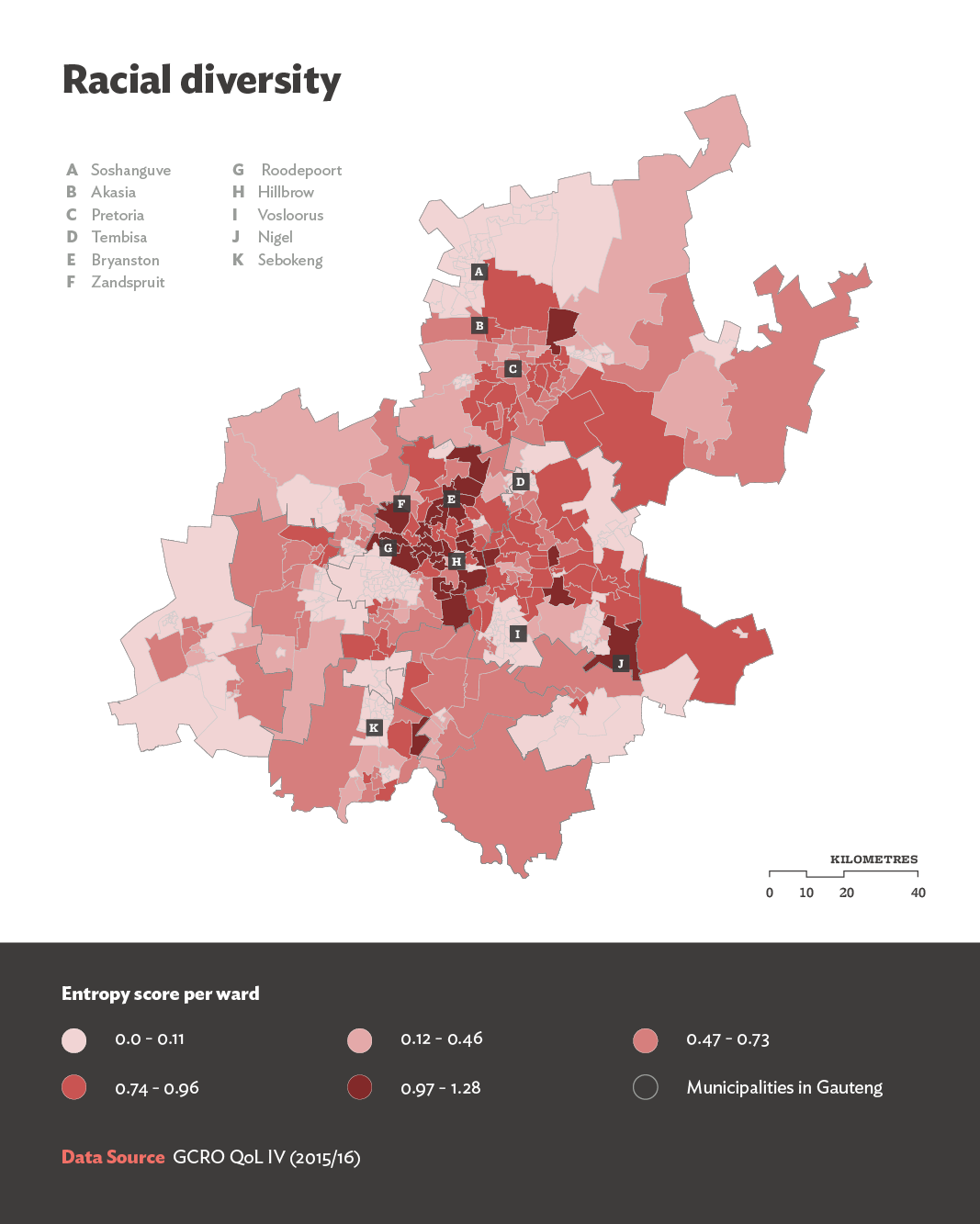 The picture of racial integration presented in Map 1 is revealing in some senses but misleading in others. It suggests that former white, Indian and coloured neighbourhoods are relatively diverse and that former townships and rural parts of the province are more homogenous. However, if we map spoken language diversity per ward the picture largely reverses. In Map 2 we have specifically mapped ‘language most often spoken at home by the respondents, irrespective of their mother tongue’. Here we can see darker-shaded wards, reflecting greater diversity, in townships such as Soshanguve, Tembisa and Vosloorus, while former white, Indian and coloured suburbs are relatively homogenous (note Bryanston, Roodepoort and Pretoria East). There are also situations, such as Sebokeng, in which there is relative homogeneity in terms of both of race and language. 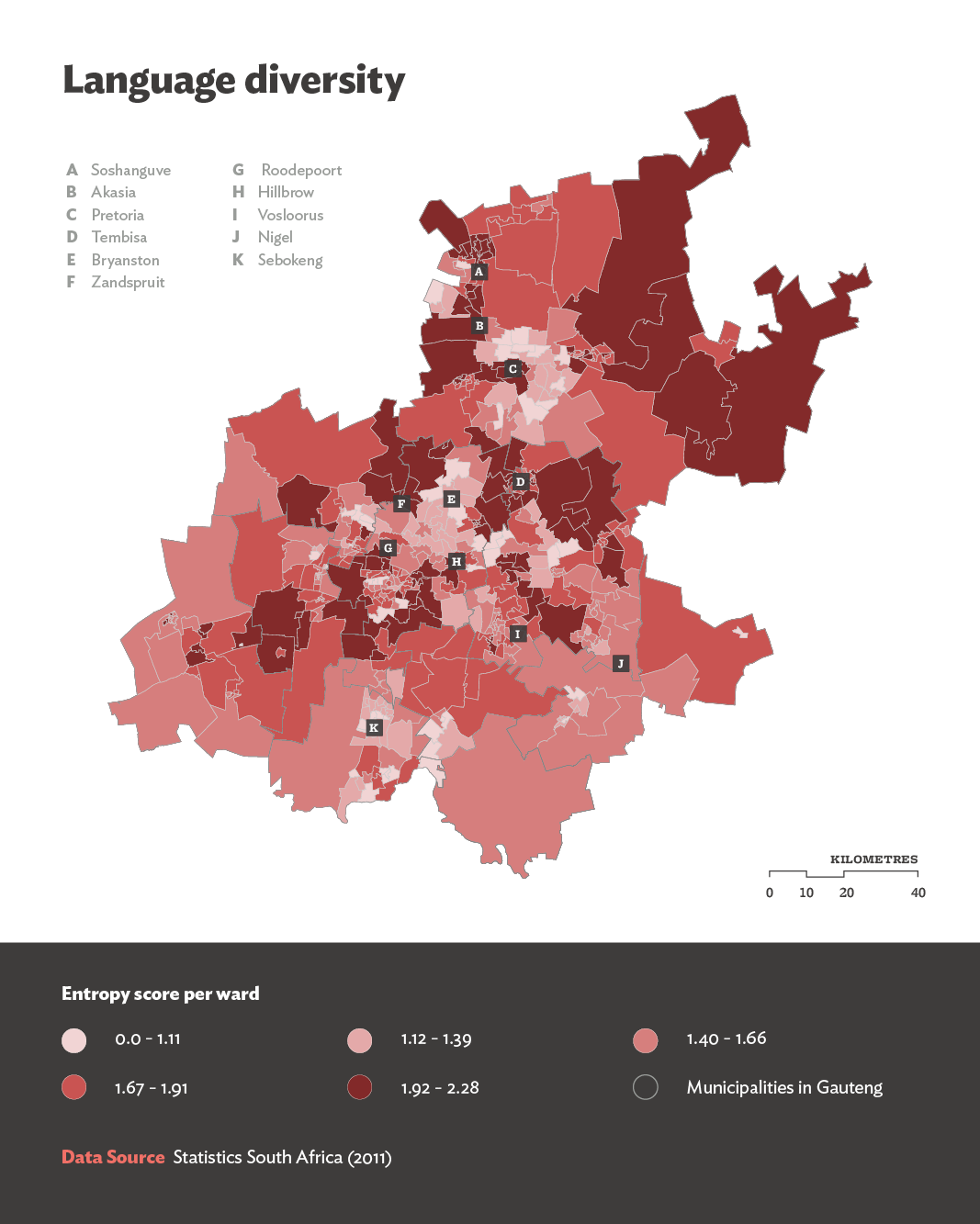 Finally we have mapped income diversity at ward level. In Map 3 we can see that areas such as Soshanguve and Vosloorus are relatively homogenous, for the reason that they are overwhelmingly poor. Areas such as Bryanston and Roodepoort are also relatively homogenous because they are overwhelmingly affluent. By contrast the ward containing both Zandspruit informal settlement and the Jackal Creek Golf Estate (labelled F on the map) has high income diversity because both poor and rich people live within the same ward. Of course the darker shading does not represent class integration as such – the residents of Zandspruit cannot walk freely into the gated communities within their ward and have a vastly different lived experience of the city when compared to residents in the golf estate. Indeed therefore, while the darker shading shows a co-presence of income groups, it also indicates where new forms of localised class-based segregation may now be taking shape at a sub-ward level. 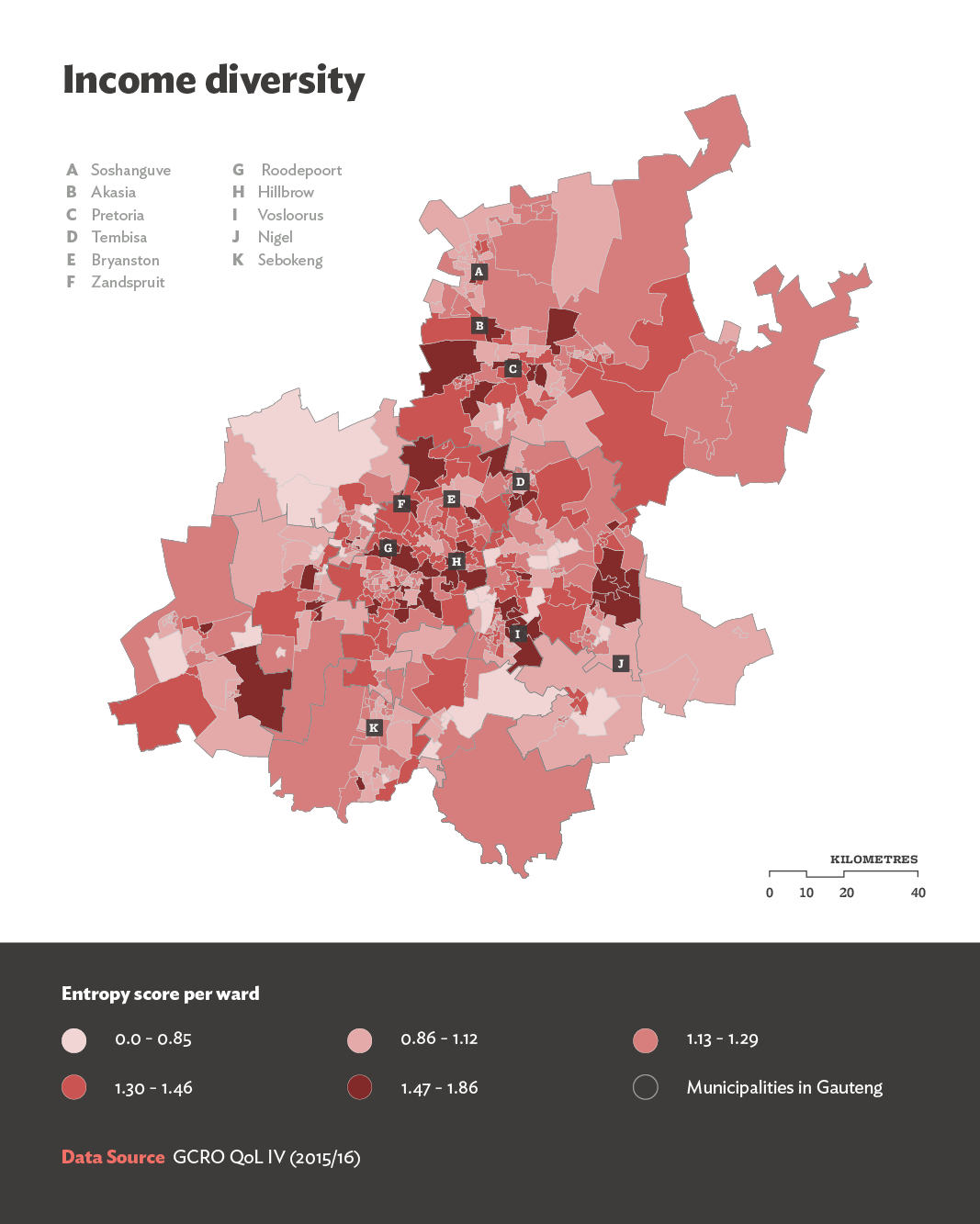 In these maps of the month we use a statistical measure known as an entropy score to gauge levels of diversity. The higher the score, the higher the measure of diversity, and in turn the higher the level of co-presence or ‘mixing’ in the area. The entropy score per ward (Parry & Van Eeden, 2015) is calculated using the following formula, where n is the number of social attributes considered in a subunit and pr is the proportion of the subunit’s total population belonging to social attribute r:

Table 1 gives an illustration of how the entropy score represents diversity using data from the GCRO’s Quality of Life survey IV (2015/16). Table 2 below summarises the data used to calculate diversity for race, language and income. 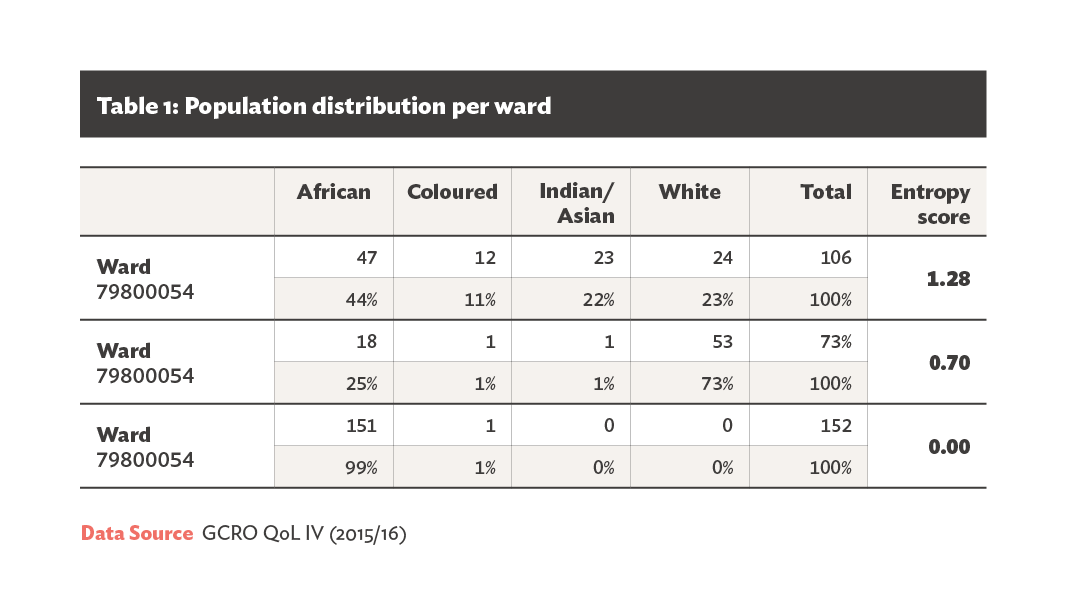 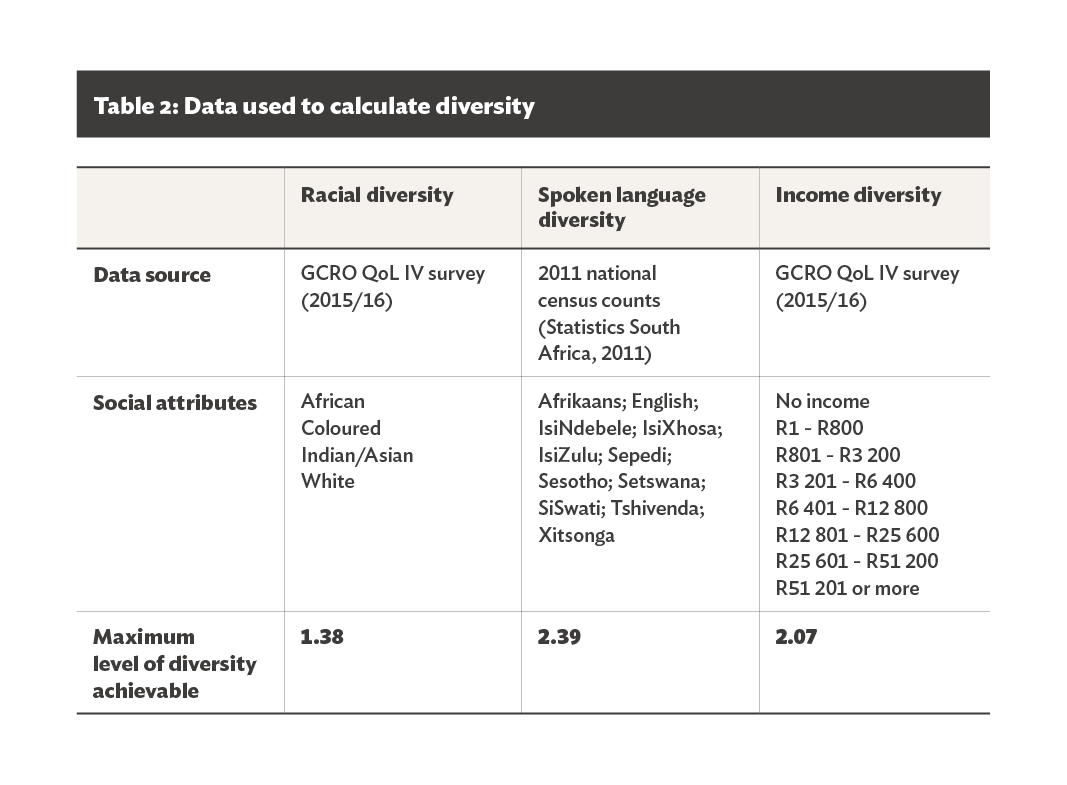 Link to projects:
Understanding the objective of post-apartheid urban mixing