The March map of the month presents the distribution of the best and worst performing public schools (based on the 2014 matric results) across Gauteng. The best performing schools are split into the top 30 plus schools overall (44 schools that achieved 100% pass rate) and the top 30 schools in township areas. Similarly, the worst performing schools are split into the bottom 30 schools overall and the bottom 30 schools in township areas. It is important to note that in some cases township schools in the overall categories (top and bottom) overlap with schools in the township categories (top and bottom).

The schools are overlaid on the South African Multidimensional Poverty Index (SAMPI) produced by Statistics South Africa (StatsSA) using census 2011 data. SAMPI (which is a measure of multidimensional poverty) is computed on the basis of a set of eleven indicators spanning across four equally weighted dimensions, as shown in Table 1 below. A household that falls short of the deprivation cut off is considered poor and, if the weighted average of indicators for the household totals 33.3% or more, the household is deemed multidimensional poor (SAMPI Poor).

In this instance the unit of measurement is the ward and the higher the index, the poorer the ward. The SAMPI scores were split into 5 categories using natural breaks in the data, with the lowest category (0.000048 - 0.009174) representing the lowest rates of poverty and highest category (0.097677 - 0.219619) representing the highest rates of poverty per ward. Wards that have a SAMPI score of 0 were categorised as ‘not SAMPI poor’ (meaning they are found not to be multidimensionally poverty stricken wards). In addition, ward number 74804019 (in Merafong City local municipality), was excluded from the analysis due to missing data.

Interestingly enough, the mean SAMPI score of the top 30 schools in the townships is worse than the bottom 30 schools (see Table 3).

Although the best township schools are located in wards that are multidimensionally poor, their academic performance was commendable, with pass rates ranging between 96.27% and 100% (Table 4). Furthermore, out of the 30 plus schools overall (44 schools that achieved 100% pass rate), 8 of them are located in townships. This may indicate that Gauteng’s education programmes in the township areas are having a significant impact. To better investigate this in future, the number of distinctions per learner per school may be a better measure than pass rate. However, the overall analysis shows there is no automatic or deterministic link between poverty and performance – but there clearly is a correlation in many instances, both for top and bottom schools.

From the results of the spatial overlay analysis alone, there is no clear relationship between a school’s performance and the multidimensional poverty situation of the wards in which such schools are located. For example, a school may be located in a multidimensional poverty stricken ward while some of the learners may be residing in less poor areas. Hence, a study of the socio-economic profiles of learners, the catchment area of the school, as well as patterns of movement across wards to schools, may provide a better understanding of a school’s performance. This calls for deeper analysis to identify the exact factors that determine performance. Suggestions in terms of how the analysis needs to be reframed for a fair and objective comparison are as follows: 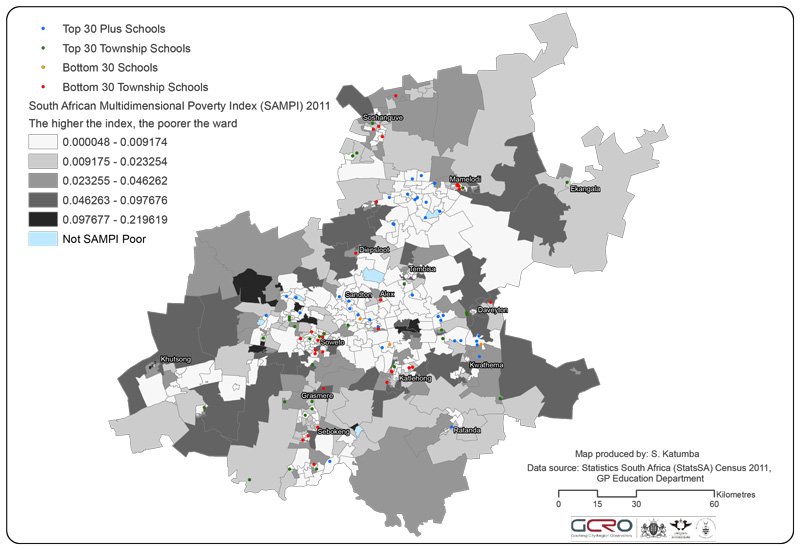