“Gauteng has fared extremely well during the last two years of global economic recession,and overall quality of life has risen very slightly to 6,25 (out of 10) for the province as a whole”, according to Prof David Everatt, the Executive Director of the Gauteng City-Region Observatory, speaking on the release of the GCRO’s 2011 ‘Quality of Life’ survey results on Monday 23 July 2012.

‘The driver has been government delivery – particularly in meeting basic needs and a perception among respondents that crime levels have dropped – but the scores were pulled down by growing cynicism about politicians, concerns about corruption, massive levels of unemployment, and on-going psycho-social challenges such as racism, xenophobia, conservative attitudes to gender equality and the like,” said Everatt.

Gauteng Premier, Nomvula Mokonyane, concurred, saying the GCRO’s results on safety are spot-on. Speaking at the launch, Mokonyane said the reality was that police had dismantled organised crime networks, and that the government believed it was winning the war against crime. She stressed the need to reprioritise programmes that respond to the needs of the Gauteng's people. GCRO is building integrity through these sorts of strategic partnerships.

Deputy Vice-Chancellor from the University of Johannesburg Prof Adam Habib said that the 'Quality of Life' data lies at the heart of ensuring the academy works with government to get the region working for the people.

According to Deputy Vice-Chancellor of the University of the Witwatersrand, Prof Rob Moore, social research studies, such as the 'Quality of Life' survey establish important baseline insights for future work in the region.

The GCRO’s bi-annual ‘Quality of Life’ survey tracks economic, political, socio-economic and other dynamics of the Gauteng city-region (GCR) – which includes the whole of Gauteng and key outliers (such as Rustenburg and Sasolburg). This key region contributes 43% to national GDP and is the beating heart of the national and regional economy.

For more information about the Quality of Life project see:
https://gcro.ac.za/research/project/detail/quality-of-life-survey-ii-2011/ 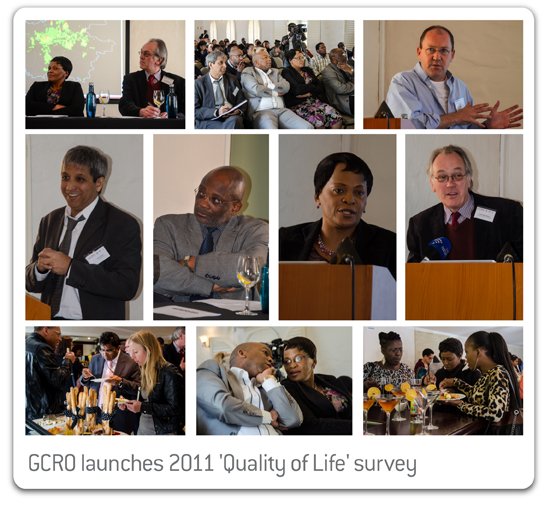